'Will You Ask Sant Ravidas To Leave Also?': Second Day In A Row, PM Modi Tears Into Cong In Punjab 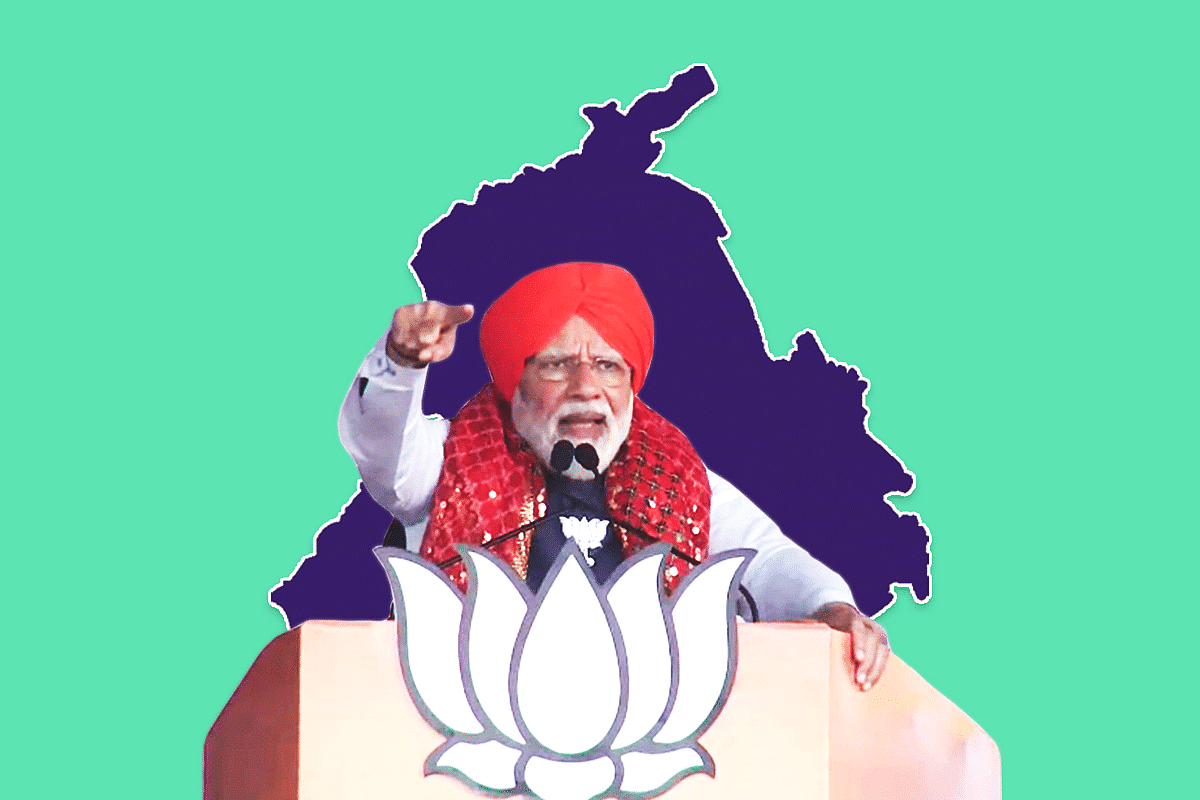 Abohar, Feb 17 (PTI) Prime Minister Narendra Modi on Thursday hit out at Punjab Chief Minister Charanjit Singh Channi for his 'UP, Bihar and Delhi de bhaiye' remark, saying people with such 'divisive thought' do not have the right to rule the state.

Addressing a rally here ahead of the February 20 Punjab assembly polls, he also urged voters to bring the BJP-led alliance to power in Punjab for the all-round development of the state.

Channi during a Congress roadshow on Tuesday courted controversy by asking people not to let 'bhaiyas' of Uttar Pradesh, Bihar and Delhi enter Punjab, a remark apparently aimed at leaders of the Aam Aadmi Party (AAP), which is emerging as a strong contender for the polls to 117-member state assembly.

In a video circulating on social media, Congress general secretary Priyanka Gandhi Vadra is seen beside Channi and clapping when he made the remarks during the roadshow in Rupnagar.

The word 'bhaiyas' in reference to people from Uttar Pradesh and Bihar is generally considered offensive.

During his address, Prime Minister Modi attacked the Congress, saying it 'always makes people of one region fight against another region for its own gains'.

Referring to Channi's remark, he said the entire country saw this.

'The statement, which the Punjab chief minister has made, and his leader, who was standing beside him, was clapping. The entire country has seen this,' Modi said.

'By such statements, who are they trying to insult. There would hardly be any village here (in Punjab) where our brethren from Uttar Pradesh or Bihar would not be doing hard work,' he said.

Noting that Guru Ravidas Jayanti was observed on Wednesday, he said, 'I want to ask these leaders where was Sant Ravidas born. Was he born in Punjab? He was born in Uttar Pradesh's Varanasi and you will not let 'bhaiya' of Uttar Pradesh to enter here, will you throw out Ravidasiyas (followers of Guru Ravidas), will you erase Sant Ravidas' name too. What kind of language are you speaking?'

This is the second day in a row that PM Modi has teared into Congress. Prime Minister Narendra Modi, on Wednesday (16 February), addressed a public meeting in Pathankot, Punjab. PM Modi went all out against both, the Congress and the Aam Aadmi Party (AAP), and termed the latter as the photocopy of the Congress.

Speaking at the rally, PM Modi said, “Give me five years to serve you. I assure you farming, trade and industry will be made profitable in five years” if the BJP-led alliance is voted to power in the state. The prime minister reiterated the BJP’s resolve to establish a ‘Nava Punjab’ (New Punjab), that is “Majboot” (strong) and not “Majboor” (helpless), and urged the people of Pathankot to bid farewell to the Congress party.

It must be noted that Pathankot has a significant Hindu population, which is supposedly the BJP’s core voter base across the country. As per the 2011 Census data, Hinduism is the majority religion in Pathankot and it accounts for around 88.89 per cent of the total population. Sikhism is the second most popular religion with 8.05 per cent followers.

AAP and Congress are one and the same

"If Congress is original, AAP is its xerox...One looted Punjab while the other one is involved in scam after scam in Delhi. Despite being 'Ek hi thali ke chatte batte', they (AAP and Congress) are playing 'noora kushti' (fixed fight) in Punjab, pretending to be against each other," he said. One has pushed Punjab into drug addiction, while the other is hell bent on drowning Delhi in liquor addiction, he added.

PM Modi said that this land belongs to Harmandir Sahib and Kartarpur. I bow to all the Gurus from the land of Punjab.

"Today is the birth anniversary of Sant Ravidas ji. Before coming here, I received blessings from Guru Ravidas Vishram Dham Temple in Delhi. A large number of devotees from Punjab are visiting his birthplace, Banaras. Whatever I and Yogi ji could have done for the devotees of Punjab, we have done it. The Railways has also run two special trains for the devotees,” said PM Modi.

“As the MP of Banaras, it becomes my responsibility to serve you. Get the facilities you need. At Sant Ravidas temple in Kashi, we have dedicated a huge langar hall to the devotees” added PM Modi, as he extended warm greetings to all the people on the birth anniversary of Sant Ravidas ji.

It is noteworthy that Sant Ravidas belonged to the leather-working Chamar caste, i.e., a part of the Dalit community. There are lakhs of followers of the Ravidassia tradition in Punjab, and especially in Pathankot. As per the 2011 Census data, the Scheduled Castes constitutes 31.3 per cent of the total population of Pathankot Tehsil.

Given the Hindu majority in Punjab and the presence of a considerable Dalit population, the prime minister’s emphasis on the same could prove to crucial in consolidating a significant chunk of Hindu votes for the BJP, if not in this election, then in the next one.

PM Modi quoting a couplet of Sant Ravidas ji- "Aisa chahun raaj main, mile saban ko ann, chhot bado sab sam basey, Ravidas rahe prasann" (I wish such a rule where everyone gets food and everyone, whether small or big, are treated equally)- said that the BJP’s mantra of “Sabka Saath-Sabka Vikas” is also inspired from the principles of Sant Ravidas ji, and the welfare of the poor is most pertinent for us.

The prime minister said that the coronavirus pandemic was the biggest epidemic of the past hundred years, and poor people across the world faced a severe food crisis. “Even during such hard times in the pandemic, the BJP government, guided by the spirit of Sant Ravidas ji, is providing free ration to crores of countrymen. In Punjab alone, free ration is being provided to lakhs of people,” said the Prime Minister.

PM Modi further said that their government has provided free corona vaccines to every village. He said that about 95 per cent of the population have received the first dose, and it has shielded the people in the fight against covid.

“Majha has loved me like a mother”, recalls PM Modi

The Prime Minister, recalling his memories of Pathankot, said “Majha ki mitti ne mujhe maa jaisa pyaar diya hai” (Majha has loved me like a mother)...But the way I and the BJP have got chances to serve in many states of India, Punjab is yet to give us that chance…For the unity, peace and a brighter future of Punjab, we sacrificed the future of the party.” The PM asked for a chance to serve Punjab for 5 years.

“The only thing that is going on in Punjab is the illegal sand mining, and the mafias here are enjoying the luxuries of lavish palaces. The Prime Minister claimed that the mafia will leave Punjab if the NDA government is formed. The youth of Punjab would need not go anywhere,” said PM Modi, noting that there has been no industrial progress in Majha.

"Wherever BJP established itself, the remote control family (Congress) from Delhi was wiped out. Wherever there is peace, appeasement has been given a farewell, the same farewell has to be given in Punjab also," he said. The prime minister even branded the Congress as a party driven by the “remote control family”.

“What misdemeanor has the Congress not done against the country and Punjab?”, asked the Prime Minister. Be it the Pathankot terrorist attack or the Pulwama attack, the Congress leaders doubted our armed forces and demand proofs of their bravery.

PM Modi questioned whether the security of a sensitive border state like Punjab can be given to such people. “If they get a chance again, they will not shy away from risking the security of Punjab. Earlier there were leaders like Captain Amrinder Singh in the Congress who checked them from treading on to the wrong path. But now, he isn’t with them either,” exclaimed PM Modi.

He said that the Congress also failed to keep Kartarpur Sahib, the final resting place of Guru Nanak Dev, within India's territory during the Partition. “It also got a chance in 1965 to take it back, but it did not,” added PM Modi.

“We built the Kartarpur corridor. We celebrate the Prakash Parv of Gurus all over the world. The Congress bears the stigma of Shri Darbar Sahib. We punish the accused of Sikh riots, they award them with big posts. These people had put all their strength in stopping the construction of Ram temple. They also opposed the construction of Kashi Vishwanath temple,” said the Prime Minister while enumerating the BJP’s devotion towards the Sikh community.

They are saying they will not let people of Uttar Pradesh and Bihar enter, Modi said, adding, people with 'such divisive thought do not have the right to rule Punjab even for a moment'.

Referring to the recommendations of the Swaminathan Commission report, he said it was his government which implemented them.

'History is witness that the Congress has always betrayed farmers,' Modi said.

'There was a demand for implementing the recommendations of the Swaminathan Commission report for several years but they continued to sit on the file. Congress governments only spoke lies,' he said.

He said when his government was formed at the Centre, it implemented the recommendations of the commission, and that it was in his government's time, there was a record purchase of foodgrains.

Attacking the Congress government in Punjab, Modi said every trade has been captured by the mafia in Punjab.

He also said that because of the Congress government's policies, nobody was ready to make investments in Punjab.

In entire Punjab, one voice is coming out and that is to make the BJP-led alliance victorious and form a 'double engine' government, the prime minister said.

'Give one chance to us, give me five years and then see how the double engine government takes Punjab on a speedy path of development,' he said.