Winning In An Unlikely Constituency - How Groundwork Won Modakurichi For BJP 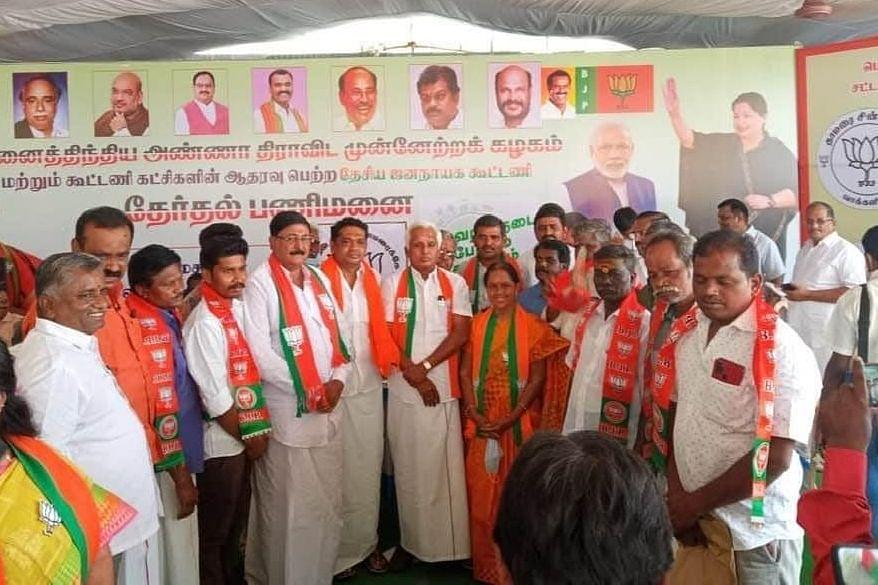 Prof P Kanagasabapathi was about to start from his house in order to lead a protest against the post-election violence in West Bengal when this writer caught up with him.

The busy state vice-president of Bharatiya Janata Party (BJP) was humble while talking about the turnaround achieved by his team in the recent polls to the Modakurichi Assembly segment in Tamil Nadu.

Modakurichi is an agrarian constituency that is about 15 km from Erode and 110 km from Coimbatore.

The ancient Kalingarayar Canal and the three small towns – Kodumudi, Sivagiri, and Arachalur – are a part of the landscape. About 75.26 per cent of the voters participated in the recently held polls to the Tamil Nadu assembly. This was a higher percentage when compared to the rest of the state.

The BJP, which was part of the National Democratic Alliance (NDA) under the leadership of All India Anna Dravida Munnetra Kazhagam (AIADMK), had just scored a little over 4,000 votes in the earlier elections to the assembly.

It is interesting to note that a record 1,033 candidates contested this seat during the 1996 elections, forcing the Election Commission to increase the security deposit thereafter.

Dr C Saraswathi of the BJP was allotted the seat in the 2021 elections and she won the seat by defeating the Dravida Munnetra Kazhagam (DMK) candidate, Subbulakshmi Jagadeesan. The runner-up has served in the state and central governments as a minister. She is the current deputy general secretary and a high-level committee member of DMK.

C Saraswathi is a medical doctor by profession and she is well known for her service-minded approach. Dr Saraswathi and her husband Dr Chinnaswamy own the C K Hospital at Erode and therefore also known as 'C K Saraswathi'.

Modakurichi, thus, witnessed a contest between two women. Subbulakshmi Jagadeesan has a Dravidian background and hails from the ‘Periyar’ heartland.

However, Dr Saraswathi managed to defeat a political tycoon in in her own backyard.

Dr Saraswathi is very well known for her free medical service over the decades. Her popularity as a medical practitioner and reaching out to people added to her recognition.

The BJP campaign in Modakurichi was led by Prof P Kanagasabapathi (PKS) who offered an insight into the electoral battle that has created a history of sorts.

“Our state organising secretary, Kesava Vinayagam, offered me the role of handling the Modakurichi constituency. I agreed on one condition that I be given a free hand. Of course, I promised to do my very best. We won and the credit goes to the hard work of the team and the clean image of our Prime Minister, Narendra Modi ji. The candidate Dr Saraswathi and the party in Modakurichi offered complete cooperation. They did a very decent campaign. The hard working villagers won the day.”

PKS stayed in Modkurichi for three weeks to ensure the victory of Dr Saraswathi.

Modakurichi is an agrarian constituency and therefore one could not talk about flyovers, highways, airport, and metro.

The farmers and the local people had to be assured that their interests would be protected by the BJP.

Of course, these farmers want a good agrarian infrastructure, decent medical facilities, and proper remuneration for their crops. Awareness and benefits that have accrued due to the numerous Modi government schemes had to be understood by one and all.

Proper coordination between the constituents of various parties had to be achieved. Therefore, PKS paid a visit to all the leaders and former people's representatives within the constituency.

He had to also organise the booth president's meeting, and also toured the constituency. He ended up visiting most of the places more than twice. The electorate consisted of the agrarian Kongu Vellalar Gounders, Vettuva Gounders, Scheduled Cates and the minorities.

PKS stayed in the Indian Public School guesthouse close by and charted the course of victory.

"I used to get up before 6am and begin my day. It was not possible to sleep before 1am. These are the only 20 days in my life after my Class X where I had not read a single newspaper. I had to get everyone concerned on the same page and it was possible after a good number of one-to-one meetings," said team leader Prof PKS.

The local BJP was keen to work hard, he said.

The BJP was made up of five mandals and AIADMK consisted of two ondriums.

Also, despite the popularity of Prime Minister Narendra Modi among the people, the party symbol, lotus, had to be introduced to the people.

The opponent, Subbulakshmi Jagadeesan, is the senior-most leader of the DMK from the agrarian Kongu Vellalar Gounder community. In fact, she was also known as 'Modakurichi Subbulakshmi' and therefore, it required huge efforts to win the elections.

Modakurichi constituency happens to have a host of former legislators who included the sitting MLA, V P Sivasubramani and a former minister, P C Ramaswamy.

Both these gentlemen belonged to the AIADMK. PKS ensured that all of them wholeheartedly participated in the electoral campaign.

He would hold meetings after the campaign time and it used to go on for hours. The calm and tireless approach of PKS ensured that the campaign went on without any hitch.

He used to personally look into issues and solve them on the spot. Small farming hamlets and sprawling bungalows dotted the constituency which happens to be the home to a number of kula deivam temples (family temples) of the agrarian Kongu Vellalar community.

The Trimurti temple at Kodumudi is part of the 'Kongu Ezhu Padal Petra Sthalams' (one of the seven sacred shrines of Lord Shiva in the Kongu region). The nearby Nattaatheeswarar temple has been very popular.

It is located right in the centre of River Kaveri in every sense – it is not only equidistant from the two banks but also equidistant from Thala Kaveri (origin of the river) and Poompuhar (the place where the river joins the Bay of Bengal).

The temple is accessed by a coracle and PKS had been here too. A sadhu from the southern districts had visited those residences of the SC members.

There are more than 15,000 beneficiaries of the various Modi government schemes and PKS ensured that his team members were in touch with each one of them.

He got the best out of each person and this was possible because of him getting rid of contradictions and conflicts. He kept the election clean and also used a simple approach.

Self-help groups, mahila groups had worked along. The Pariwar organisations had taken an active part. They had come in on their own and worked for more than 10 days.

Their selfless act was recognised by the electorate. People from neighbouring Namakkal and Karnataka put in their bit. Karnataka based MLC - Narayanaswamy was very supportive.

"Our team was active in the social media too. WhatsApp and memes became the order of the day. I personally visited a number of community centres including the Mayavan Temple at Velaketthi village. This helped in forging a marvellous social relationship. We relied on a natural organic approach backed by a calm, positive attitude. My own field experience as an office-bearer in a cooperative institution helped me chart a course. We created a constituency manifesto and the document, 'Saraswathi Sabatham' (promise of candidate Saraswathi) was created. The farmers of this region are in need of a couple of institutions which would help them to move ahead," added PKS. Dr Saraswathi is keen to do her best in the interest of the people.

The team leader, Prof Kanagasabapathi had organised and participated in a large number of rallies in support of the farm bill. He had created awareness by even holding small micro meetings at the farm level over the last several months.

This has made the locals accept the farm bills and has therefore yielded excellent electoral results for the AIADMK led NDA alliance in western Tamil Nadu.

Lotus stickers were put up on the entrance of each and every house and party workers sported them on their vehicles. The Lotus Hand-fan had driven away adversity and brought in positivity.

Five teams created awareness about BJP and the Modi schemes for the poor. They held street plays throughout the constituency. These one-hour plays created a big impact.

All this and more took BJP from the fifth to the first place with Dr C Saraswathi winning the elections. This turnaround was scripted by Prof Kanagasabapathi and the committed local team. His field work and strategy has helped the BJP to wrest a seat from a Dravidian star in the Periyar heartland of Tamil Nadu.