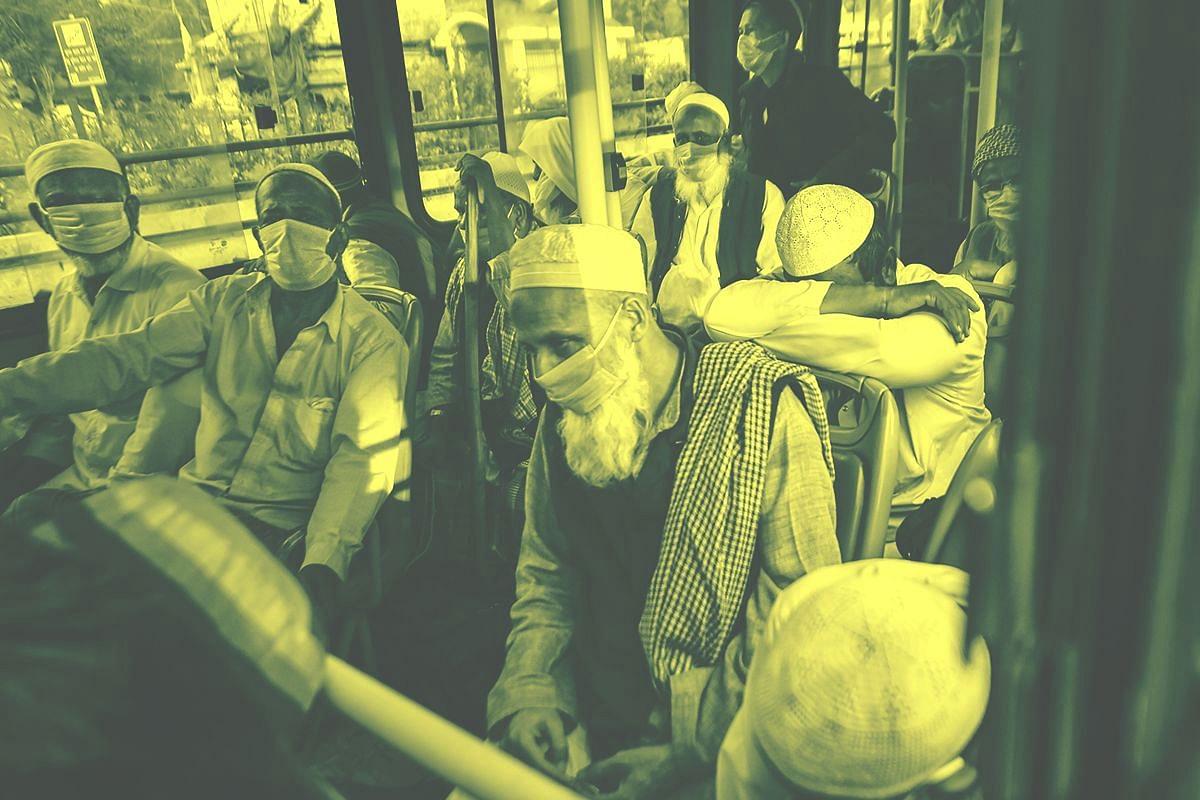 People being taken to hospital from Delhi’s Nizamuddin area.

It is interesting that even as the world is divided over whether to name the Covid-19 virus that originated in China as Wuhan Virus or not, nobody even wants to try naming an infection vector that has caused huge havoc across several Asian countries, including India.

The Tablighi Jamaat, an organisation dedicated to expanding the Islamic faith by getting rid of all syncretic elements in Indian and other variants of Islam, has been busy spreading the virus, thanks to utter callousness on the part of its leadership about the need for social distancing.

Despite growing public awareness and repeated government warnings on large gatherings, the organisation held a global event from 1-15 March in Delhi’s Nizamuddin Markaz, which was attended by thousands of people, including many international preachers who came on tourist visas to promote the religion.

The infection vector, that apparently originated in a Tablighi Jamaat event in Malaysia between 27 February-1 March, has roiled Malaysia, Indonesia, Pakistan and India, among other countries.

While over half of Malaysia’s Covid cases are attributed to the Tabligh event, in India the dispersal of Tablighis has already led to 10 deaths and over 400 hospitalisations, with another 1,100 sent to quarantine.

Many states are still trying to establish the sheer number of people who attended the Tabligh event who may yet be “super-spreaders.”

The Tabligh, in a statement made after Delhi, decided to file an FIR against the organisation’s leadership, claimed the real problem was the lockdown which forced the faithful to stay inside the Markaz’s headquarters.

However, this is a trifle self-serving, for even though the Janata Curfew was announced on 22 March and a full-scale lockdown came on 24 March, signals about the oncoming spiral in infections had become public knowledge as early as the first week of March.

On 4 February, India stopped people from boarding flights from China to this country, and passengers originating from Thailand, China, Singapore and Hong Kong were screened for symptoms of the virus on arrival.

On 14 February, passengers from Iran, South Korea, France, Spain and Germany were added to the list of screening on arrival. On 24 February, Iran was added to the flight ban list.

The same day, screening was introduced for air passengers arriving from Nepal, Vietnam, Indonesia and Malaysia.

Clearly, while it seems as if passive or active carriers arriving from the Tabligh virus-originating areas (Malaysia) were not picked up by airport screeners in India, the event organisers surely were aware that there was a huge risk.

In fact, well before the peak arrivals at the event (13-15 March), the news channels were full of announcements about social distancing and bans on large gatherings.

On 4 March, the Delhi government said there should be no large gatherings, including marriages.

The same day, Prime Minister Narendra Modi said he would not be participating in Holi Milan to set a personal example of social distancing.

On 12 March, the Delhi government invoked the Epidemic Act and all gatherings of 200 or more people were banned.

On 16 March, the size of gatherings was reduced to 50 and on 19 March all Delhi schools were closed.

The Prime Minister’s announcement of the Janata Curfew (scheduled for 22 March) came on the evening of 20 March.

The full lockdown was announced on 23 March in a late evening announcement.

If the Tabligh ignored all the announcements all the way from late February to 16 March, when the gravity of the situation was becoming more than obvious with every passing day, it cannot now blame the lockdown for its inability to disperse the gatherings.

However, one cannot blame the Tabligh alone, for the Delhi government and the police could not have remained in the dark about these large gatherings.

If temples can be ordered closed and the Ganga aarti suspended, how come they did nothing till after the Janata Curfew of 22 March?

A video showing a police warning to Tabligh leaders, dating to 23 March, has now surfaced.

The video is as much an indictment of the police as the Tabligh. The home ministry has since banned Tabligh preachers from entering with tourist visas, but this is little more than bolting the stable door after the horse has bolted.

While Indonesia was able to stop the Tabligh from going ahead with its event after hearing of the Malaysian infections, India sat on its hands.

The questions are: One, why did a video even have to be made on the warning issued to the Tabligh? Was it because the police were afraid of how the Muslims would react to this warning? Two, why did the warnings wait till 23 March, when the event was over on 15 March?

The politically incorrect suspicion is that when it comes to dealing with Muslim gatherings, India’s government is always on the back foot. This is also why the Shaheen Bagh protesters, who were blocking an important road in Delhi, were not removed till the lockdown.

As late as 18 March, the Tamil Nadu Thowheed Jamath held anti-Citizenship Amendment Act in several towns, ignoring growing cries even from several Muslim organisations to call it off due to the Covid threat.

The state government did not attempt to stop the protests. The Jamath claimed that CAA had claimed more lives than Covid.

In January 2016, a Muslim mob rioted in West Bengal’s Malda district and even burnt down the Kaliachak Police Station. Within days, not only was the station repainted as if nothing happened, but most of its police personnel were transferred out.

It was as if the state government wanted to quickly forget what happened there.

In fact, India is not the only country to deal with Muslim issues with kid gloves.

In Germany, which faced a huge influx of Muslim refugees from war-torn West Asia, Chancellor Angela Merkel admitted two years ago that there were places that were “no-go areas” for ordinary citizens.

Muslim ghettos that are no-go zones have been reported from Belgium, France, Sweden and Denmark.

In Britain, Pakistani Muslim “grooming” gangs were raping teenage girls in Rotherham and other towns for years, but the police failed to act in time due to fears of being called “racist” or “Islamophobic.”

Some Islamist groups are even trying to create a small Sharia zone in East London, but thus far there has been no organised pushback by the state.

Political correctness forces officials from defining no-go areas by their name, something which Merkel admitted was a reality.

She said in an interview: “There are such areas and one has to call them by their name and do something about them.”

If many Muslim ghettos and regions are becoming no-go zones for the police, it is no surprise that the Indian state too copped out of telling the Tabligh Jamaat to wind up when ordered to do so.

The world has to confront the reality that most governments are being intimidated into inaction by aggressive Islamist propaganda that labels any attempt to invoke the law as Islamophobia.

Author Kapil Komireddi, a vicious hater of Narendra Modi, has written a recent piece berating the world for falling for the Chinese propaganda on the virus in order to escape blame for its spread.

He wrote: “Once the virus made its inevitable outward march, claiming lives beyond China’s borders, the CPC (Communist Party of China) mounted a major public relations exercise that exploited common human decencies to evade accountability. Criticism of the Chinese government was equated with racist prejudice against ordinary Chinese people….There is, alas, no shortage of people looking at this in the manner prescribed by the CPC….”.

We have too many no-go areas and Muslim ghettos where the state’s writ does not run. The time to change this is nigh. Ask Angela Merkel.