Yadav and Bhushan Deserve No Sympathy 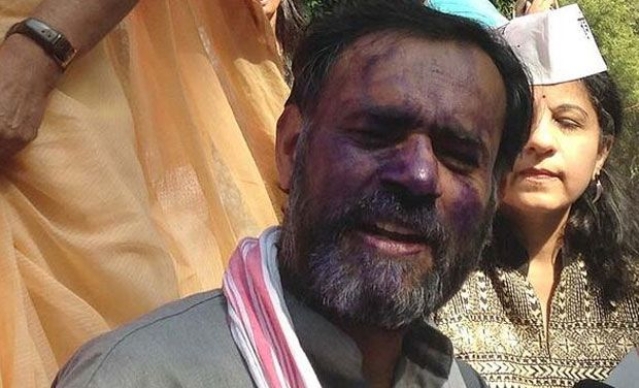 Hardcore leftists tried to take over the AAP from within. Kejriwal resisted. That is the real story behind the dissent and ousters in the AAP.

As of now, media commentary on the factional feud in the Aam Aadmi Party is tilted in favour of the unseated lot. The faction of the party led by Prashant Bhushan and Yogendra Yadav has tried to project Arvind Kejriwal as an autocrat—someone who is undemocratic and unaccommodating. Few political commentators have actually explored if he is a victim of circumstances. It is natural for the media and well-meaning individuals to support the underdog. However, in their zeal to do so, they should not lose sight of the fact that the person who appears to be the aggressor may actually be more sinned against than sinning.

The likes of Bhushan and Yadav and the whole lot of JNU-bred leftist elites wanted to run the Aam Aadmi Party in their own ideological way—not in sync with the philosophy of those who had made the Jan Lokpal movement successful—where social conflict was reconciled through the theories learned by practitioners of the art. This explains the enthusiasm of the communists and socialists who joined the AAP in large numbers during the 2014 Lok Sabha elections. When Kamal Mitra Chenoy left the CPI and joined the AAP, the JNU faculty was abuzz with discussions about how his faith could change so much all of a sudden.

It appears there was a strategy of these groups to join the AAP in large numbers and hijack the party from within. When the national executive (NE) of the party was being formed in November 2012, Kejriwal was clearly unhappy that some members were pushing their candidates in the second highest policy-making body of the organisation. But he accommodated them since he did not wish to begin his political journey on a sour note. More so because Yadav and Bhushan were known faces on television screens.

It is in this context that a much smaller political affairs committee (PAC) was formed, making it the highest decision-making body of the organisation. Kejriwal had told this author this was the reason that he was unable to accommodate deserving people in the NE. It is in this context that his address to the national council (NC) on 28 March, where he made the reason public, did not come to me as a surprise. Courtesy the party chief, Yadav emerged as the party’s high profile ideologue. At every meeting, the national convener—as the AAP head is officially designated—would give Yadav the mike and ask him to conduct the meeting.

But there were clear differences between the two. Yadav wanted the AAP to adopt a more pragmatic approach towards the “caste realities”. In one such meeting that was called to discuss the constitution of the AAP on 29-30 October 2012, Yadav’s contention was ruled out. He had said, “Friends, I was keenly hearing your names as you introduced yourselves: Singh, Srivastava, Agarwal, Pandey…Do you think when you reach out to the remote areas, the downtrodden will be able to trust you (upper caste people)?” Kumar Vishwas retorted that the movement was against corruption and the focus should not switch to social engineering. He added, nevertheless, that the doors of the party were open to all sections of the population. It was only that no tokenism would be allowed to dilute the anti-corruption plank.

In between exchanging pleasantries at the studio of IBN7 the other day, Chenoy said Arvind was from an IIT and was unable to understand social realities; he needed people who could guide him. I recalled how Yadav used to talk of these “realities”. It seemed, on several occasions, that people from the social sciences wanted him to compromise on merit for mere electoral considerations.

In the initial days, Kejriwal would snub party workers who wanted “special packages” for Muslims in exchange of an assurance of support from the community. “Will all our programmes on education, agriculture, power, water, etc not benefit Muslims equally? Should I add a clause to every point in our vision document—schools ‘not for Muslims’, water ‘not for Muslims’, electricity ‘not for Muslims’—that I have to offer something separately to the community?” the AAP chief said during a meeting in the first week of December 2012 at the party office in Kaushambi, Ghaziabad.

Outsiders may wonder why he could not stick to that secular stand for long. For me, it is compelling to believe that the ilk of Yadav and Bhushan turned him communal and casteist. Kejriwal’s transformation from a strident secularist to one who would visit the infamous Maulana Tauqeer Raza Khan, parade Christian padres on stage, visit a Shankaracharya to balance the communalism, make a cell for Sikhs and more for different caste groups, came as a shock to people like us. And it readily gave the right wing ammunition to attack him and accuse him of indulgence in appeasement politics and tokenism.

In the October 2012 meeting, Yadav had come with a fully prepared action plan of undertaking a tour of the entire country, purportedly “to take AAP to other places”. But it was shot down. Kejriwal then asked Yadav to focus on Delhi. Deep within, everyone understood Yadav was keen to enhance his political stature in the name of an outreach programme. Perhaps he had calculated that he would become the automatic choice to replace the likes of Mulayam Singh Yadav and Lalu Prasad Yadav on the national scene.

Asking him to conduct and preside over meetings was Kejriwal’s way to keep him in good humour. Why? One theory was that Yadav, well networked in the media, could create problems for a party that depended on the media in the initial stage.

Much has been written about the former psephologist’s links with the Congress and the United Progressive Alliance (UPA) government. Swarajya columnist Madhu Kishwar had once tweeted about Yadav’s pro-Congress bias:

This may explain why, all of a sudden, there is a media tirade against Kejriwal for being “undemocratic”. Is the media establishment now miffed that Kejriwal has booted out AAP’s poster boys?

As for Bhushan, he embarrassed the party with his controversial statements on Kashmir. But Kejriwal never criticised the high-profile lawyer openly.

What was the provocation? Was it democracy? Not at all. All these leftists were beneficiaries of Kejriwal’s largesse. Few would have won in an open election at the party’s NC. The party chief used his authority and let them and their lackeys get elected unopposed to the organisation’s decision-making bodies and policy committees. Why did these ‘democrats’ not object then and seek a proper vote? Why were these people silent when tickets were being given to ‘wrong persons’ in their full knowledge? Is it not true that they wanted some of their candidates to get tickets, but were upset when these were denied? This cannot be an usual wild allegation hurled at dissenters by the ‘high command’. Ten of the 12 candidates the duo had objected to were found clean by the AAP’s internal lokpal Admiral (retd) Ramdas, whom both Bhushan and Yadav are batting for now. The other two were replaced. The bone of contention must, therefore, be the fact that the dissenters wanted their candidates in these seats.

If Kejriwal had agreed to step down from the post of convener and allowed Yadav to succeed him, the duo would have said he was a perfect democrat! When he refused, they went ballistic.

There was euphoria when the AAP won by a landslide in Delhi. The leftists and other rivals of the BJP were jubilant, keen to ride on the shoulders of Kejriwal. Everyone in the AAP talks of a likely good performance in Punjab where the Congress is pitted against the Shiromani Akali Dal-BJP combine. The Congress is seriously disturbed by the AAP’s national ambition as its rise always comes at the cost of the Congress. And the leftists have realised that Kejriwal is too smart to be outwitted now. He is not going to give political space to any other ideology or party.

Kejriwal’s strategy is worth watching out for. He knows that if his government can perform in Delhi, fulfilling his national ambition will be easier. Power is assured for five years in Delhi. So Kejriwal is taking up a BJP-like agenda of e-governance and infrastructure development (albeit with hiccups like non-payment of salaries to MCD doctors, nurses, cleaners and other Class III and IV staff). Achievement on this front can help it emerge as an alternative in Punjab.

Of course, Kejriwal was caught on the wrong foot when he was heard using abusive words for his colleagues. He must apologize. But one must not deny his sense of hurt on seeing his compatriots and friends walk out and spit on him in public.

On different news channels yesterday, Yadav said that he wanted to undertake an all-India yatra to spread his message to the people. Obviously, he still nurses the ambition of emerging as a national icon. That he was not being allowed to do so was his principal grouse against the leadership.