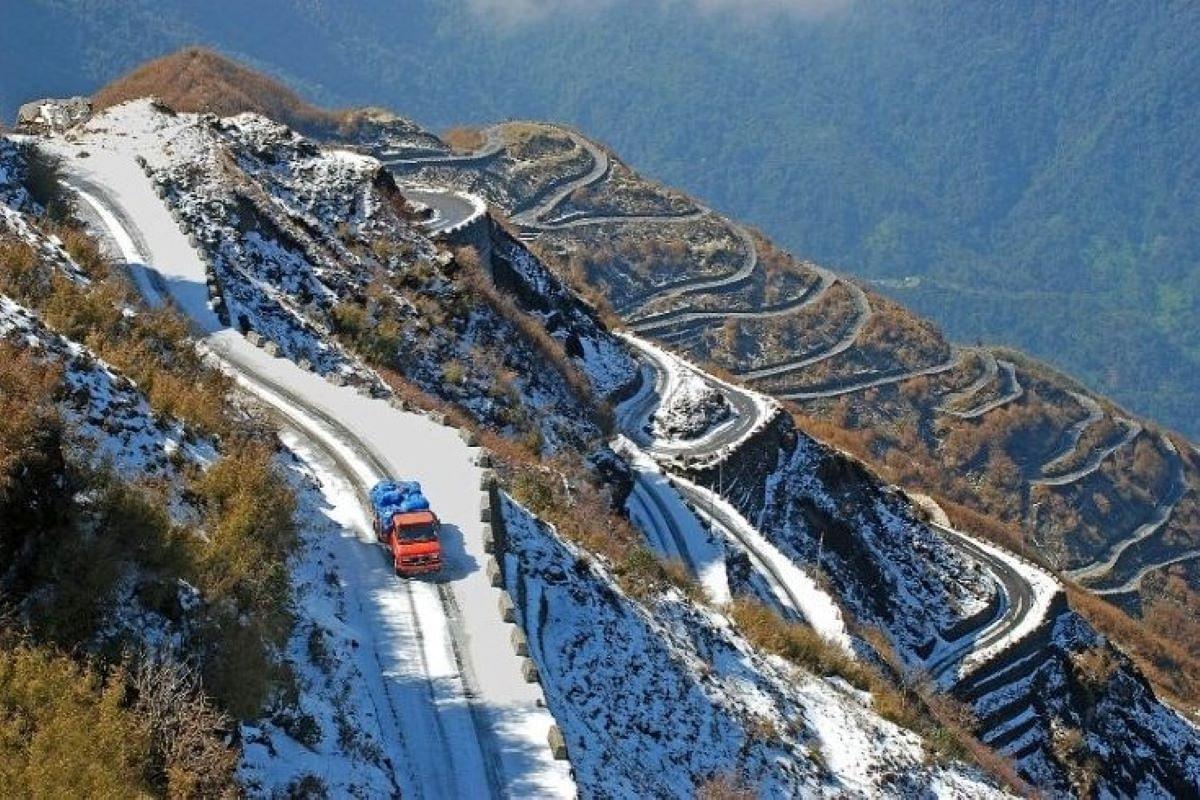 The arduous border with Tibet

The Bharatiya Janata Party (BJP) governments at the centre and in Arunachal Pradesh have initiated a crucial project that no ruling party had ever thought of in the past — reversing continuous migration of people from remote rural areas, bordering China-occupied Tibet, to urban centres of the state and beyond.

Successive Congress governments both at the federal and state levels had deliberately kept vast areas along the state’s border with China-occupied Tibet undeveloped and inaccessible.

That had forced the desperately poor residents of those areas to migrate to urban centres in the state and neighbouring Assam in search of livelihood.

As a result, large swathes of the districts along the McMahon Line have become depopulated. This, say military experts, posed grave security implications for India.

Soon after coming to power in 2014, Prime Minister Narendra Modi declared that the Northeast would be the focus area of development, including connectivity.

As part of his ‘Purvottar Kalyan’ (Northeast development) policy (read more about it here), Modi asked the BJP government in Arunachal Pradesh to suggest projects to reverse migration from the border areas.

The BJP government in the state under Chief Minister Pema Khandu, the Ministry of Development of North Eastern Region (DoNER), various other Union ministries and defence authorities, put their heads together and chalked out a comprehensive action plan.

“The whole idea is to ensure that people in the border areas earn well and enjoy a decent lifestyle, have access to education and healthcare facilities and enjoy the fruits of development like the rest of the country. We are ensuring that they gain access to modern amenities like potable water, cooking gas and 24x7 power, 4G connectivity and many other benefits which people in the cities enjoy,” Chief Minister Pema Khandu told Swarajya.

Khandu was in the state’s northern Kurung Kumey district, next to the Line of Actual Control (LAC) with China-occupied Tibet, earlier this week where he once again reiterated the need to reverse migration from the border areas.

The Chief Minister’s exhortation to the local people of the border areas rests on the infrastructure development works already completed or under way in those areas.

“People will not accept my request (not to migrate) if they don’t see development happening in their areas. We have set many projects rolling and so are in a position to make such a request now,” explained Khandu.

Senior officials who accompanied the Chief Minister to Kurung Kumey cited the example of Damin, the last major habitation on the Indian side in the district.

Khandu created history of sorts by becoming the first Chief Minister of the state to visit the remote village Monday (28 November).

Damin, with a population of 660, is about 126 km away from Koloriang, the headquarters of the district. Until two years ago, travelling from Damin to Koloriang took nearly nine hours.

“The road was terrible. In fact, there was no road at all. Local people had to walk about seven km to reach a roadhead and then travel by a bus that would ply only once a day to reach Koloriang,” Zila Parishad chairperson Takam Moni told Swarajya.

In 2000, the Border Roads Organisation (BRO) completed the construction of an all-weather road from Koloriang to Damin. The BRO is extending that road further north to a hamlet a few kilometres away from the border with China-occupied Tibet. It now takes under two hours to reach Koloriang from Damin.

Damon’s only educational institution — a lower primary school — is being upgraded to a high school and classes will start there from the next academic session.

“A large hostel is being constructed in Koloriang for students who will pass out of the high school in Damin, as well as other villages and small towns which don’t have colleges, to study at the government college in Koloriang,” said local MLA Lokam Tassar.

Tassar, who belongs to the BJP, has taken the lead in constructing the hostel. “The primary healthcare centre in Damin is being upgraded and a well-equipped ambulance will be stationed there permanently. Many other public facilities are coming up in Damin,” Tassar told Swarajya.

But, says Tassar, it is not enough to provide good healthcare, education and connectivity to people living in the remote areas.

“Livelihood is a very important area and under the directive of our chief minister, full attention is being paid to that,” he added.

The state agriculture and horticulture departments are training farmers in better practices, especially in organic farming.

“A number of livelihood support programmes have been launched in the district. Horticulture is a priority sector and income generating activities like beekeeping have been introduced. Training is being imparted to villagers engaged in weaving and in the handicrafts sector," said Kurung Kumey deputy commissioner Bengia Nighee.

"Most importantly, we are providing market linkages for agro, horticulture and other products of the district. The exquisite shawls, spreads and throws woven by womenfolk in the villages, including Damin, will soon be sold in other states, including outlets in the metros,” he added.

Chief Minister Khandu said that tourism is another high priority area. “A helipad will come up soon in Koloriang and the town will be connected with regular helicopter service. That will provide a huge boost to tourism,” said the Chief Minister.

The state rural livelihood mission is providing training to residents of select villages and towns, including Damin, to set up homestays for tourists.

“Loans and all other help, including training in hospitality, will be provided to locals to set up and run small boutique hotels very professionally. The idea is to get high-end tourists to come to Damin and other picturesque villages and towns of the district,” said MLA Tassar.

“We are an ecologically sensitive state and Arunachal Pradesh cannot bear the load of mass tourism. That’s why we are focused on high-end tourism, especially in areas like Kurung Kumey,” he said.

“Recently, one Bollywood film has been shot at Papum-Pare, Pakke-Kesang and Lower Subansiri districts. Kurung Kumey has very scenic locations and Damin can emerge as a hotspot for shooting films and videos,” said Nalo.

The Minister added that Arunachal Pradesh is replete with many off-beat destinations that showcase nature’s bounty and the rich culture of people of the state.

“We are developing these places into prime tourist spots that offer a really unique and exclusive experience,” he said.

The objective of this entire exercise is to not only stop migration of people from the border areas, but to ensure the return of those who have migrated.

In Damin, for instance, migration of locals out of the town has already come to a halt. Two months ago, five young men who had migrated to state capital Itanagar and a major town in Assam, returned to Damin and set up their own businesses besides re-engaging themselves in farming (read this).

Many other remote towns and villages in the border areas have started reporting reverse migration with modern facilities being developed and with better livelihood opportunities emerging there.

Chief Minister Khandu has been exhorting people (see this tweet) to return to their villages and towns.

“Return to your native place, your land is calling” has become his clarion call. “Migration of people from the border areas leaves those areas vulnerable to China’s expansionism,” explained Khandu.

The Chief Minister said that with all the development of the border areas that is taking place, and the establishment of model villages with all modern amenities along the McMahon Line, the border areas will get populated in five years’ time.

“We will develop the border areas in such a way that even people from the interior areas will find it attractive to go and settle down there for a good quality of life,” said Khandu.

This reverse migration will also benefit India strategically by not only ensuring more intensive vigil along the border to foil China’s expansion and cross-border misadventures, it will also provide the Indian Army a better and friendlier environment to operate in.

“The presence of patriotic people like the Aruanchalis in the border areas is of great help to the army. Local people are our eyes and ears along the vast stretches of the LAC that are not humanly possible for us to patrol. And the local civilian population in the border areas help us with logistics. A populated area along the border is always much easier to operate in than one without any human habitation,” said Brigadier (retired) D K Mishra, who had served in forward locations in eastern Arunachal.