Ground Visit: How A Nine-Year-Old Boy From Hindu Family Was Illegally Adopted And Converted To Islam 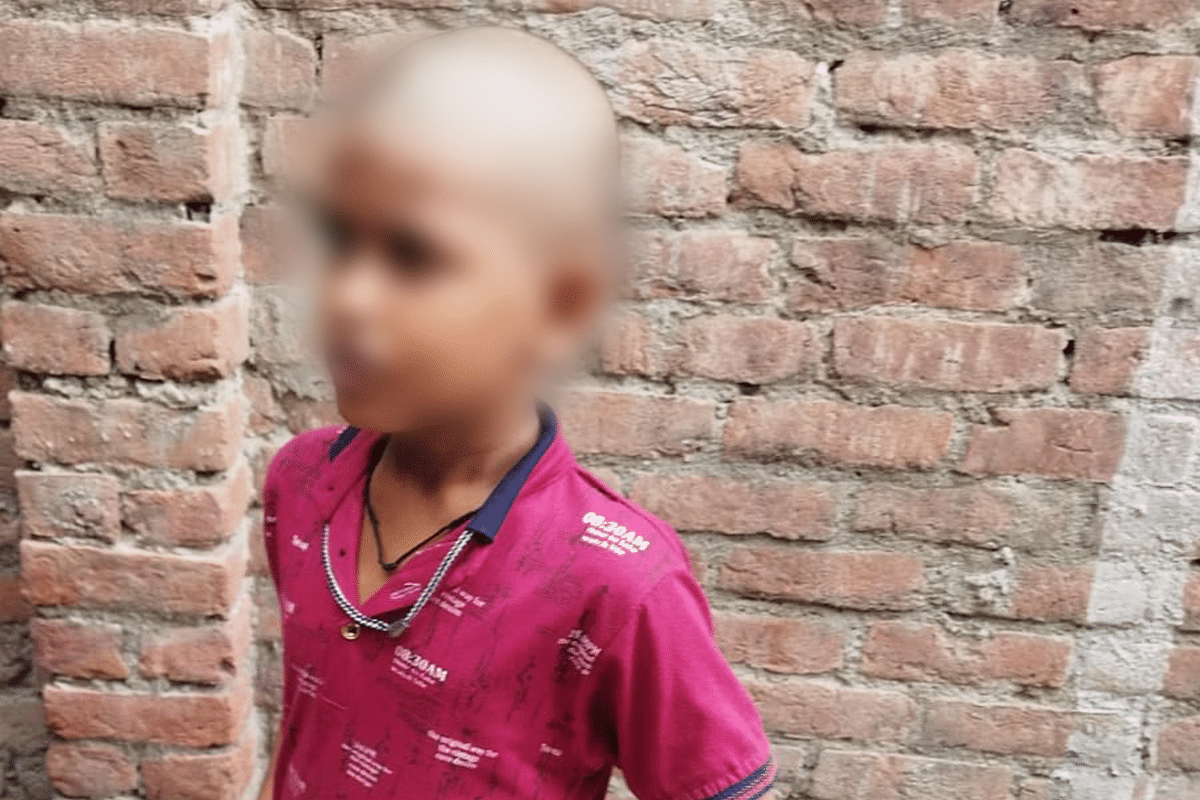 On reaching plot number 283 of Loha Mandi in Ghaziabad, I find about half-a-dozen men sitting and chatting on a cemented verandah in the open.

The verandah is outside a one-room office that has a couple of chairs, a large table, a single bed and a wall almost entirely covered with calendars bearing pictures of Hindu deities.

I ask for Sonu. The men look at each other.

“Sonu, the child who was recently rescued from here? I am a reporter,” I mention the purpose of my visit.

The men collectively nod a ‘no’. “We cannot talk. Nobody among us will talk. Else the police will come and put us in jail,” one of them says with a smirk.

“How can that be? You guys did a great job. You rescued a child. How can police arrest you for that?” I ask.

“It was Rajesh who put up the videos and tagged the police. And see where he is now? He is underground, changing locations, constantly keeping his phone switched off.”

This is quite surprising to me.

Before I proceed to recount the visit, here’s the background of why I was there: About a week ago, a newly created Twitter account in the name of Rajesh posted a video of a child. The boy, his head tonsured and full of bruises, was seen telling the person shooting the video that he was often beaten up by the man he lived with.

Reacting to the video, the verified account of Ghaziabad police, which fall under Ghaziabad district of Uttar Pradesh, asked for a contact number of the Twitter user, to which the latter replied with an address.

Two days later, that is on 10 June, Ghaziabad police shared a press note with the media. The note said that the Kavinagar police station had filed a first information report (FIR) in a case of illegal adoption of a child the previous day, and that one of the accused named Umar Mohammed had been arrested.

After this update, I accessed the FIR, which showed the complainant as an officer of the Kavinagar thana named Yashpal Singh.

Here’s the statement by officer Yashpal, recorded in the FIR (number 718/2022): On 8 June, he received information about a case of forced conversion from Twitter. He and two other policemen namely Harish Tiwari and Sonu Kumar, went to plot number 283 in Lohar Mandi area.

There, they found a nine-year-old boy named Sonu, who said he was a native of Rafiganj area that falls under Kapubigha police station in Aurangabad district of Bihar.

He said his father’s name was Mithlesh Yadav. On orders of the Child Welfare Committee (CWC), the minor was sent to a government shelter at Govindpuram.

Interrogation revealed that Sonu’s mother, Anshu, died in a train accident when he was quite young. Sonu has no memory of his father after his mother’s death. After he was left an orphan, he was looked after by neighbours Soni, alias Kunni Devi, and her husband Mithlesh Yadav. The couple looked after the child till he was nine.

On 7 April 2022, with the help of a middleman named Zulfikar, who is a native of village Loglah in Bulandshahr, the couple handed the child to another couple, named Babli and Umar Muhammad. The transfer was made by signing a Rs 50 stamp paper. Such an adoption procedure is illegal under the law.

After adopting the child, Zulfikar, Babli, and Umar made him undergo circumcision. They assaulted him and forcefully converted him to Islam, the complaint concluded.

See the statement in the FIR here.

The IPC sections invoked are sections 323 (voluntarily causing hurt), 326 (causing grievous hurt by dangerous weapon), and 120-B (criminal conspiracy), along with sections 75 (abuse and assault of the child) and 80 (protection from sexual assault) of the Protection of Children from Sexual Offences (POCSO) Act, 2000, and sections 3 and 5 of the Uttar Pradesh Freedom of Religion Act, 2021.

On 12 June, Ghaziabad police posted another update in the case, saying they had also arrested Mithilesh and Soni.

The story of nine-year-old Sonu

When I visited the spot, the group that was sitting and chatting told me they were the ones who had rescued the child.

After some time, Sanjeev Pandey walks out of the office, saying he is a transporter and owns the plot. He agrees to tell Sonu’s story, saying that unlike his staff, he fears no one. He, however, declines to get photographed.

Sanjeev says that about three months ago, Zulfikar, who works as a scrap dealer at the neighbouring office, that is at plot number 284, brought a child to work. When Sanjeev’s staff asked him about the child, he said that he had “bought” him.

Plot number 284 is owned by a Hindu man, who was not available to talk. A guard sitting outside the office said that the owner would not come to office for a week.

Sanjeev says, “Zulfikar told my staff that the child was an orphan. His parents were migrants from Bihar and were working and living in Loha Mandi, but died in accidents. A neighbouring family, Mithilesh and Soni, began to give him food and shelter in their jhuggi. Mithilesh works as a rickshaw-puller. Soni does odd jobs to supplement the income. Zulfikar told us that the couple gave him the child as they had children of their own.”

Sanjeev says that Zulfikar would make the child work “like a dog” and beat him up mercilessly. When his staff told him about the child, Sanjeev felt pity for him, and asked Zulfikar to give the child to him.

“But he [Zulfikar] did not agree,” says Sanjeev. “So I told him, look, there are two things you would not do to the child. One, you would not make him undergo circumcision and two, you would not beat him up. I told him if he breaks any of these two conditions, I would be forced to take matter in my own hands.”

Zulfikar, as per Sanjeev, took it as an affront as he soon found out. Within a week, the child disappeared. “When I asked Zulfikar, he said he had sent the boy to his village in Bulandshahr.”

After a few weeks, the child re-appeared. “Zulfikar sent the child to us to show us his circumcised part. That’s how much of a ‘harami’ he turned out to be. It was his idea of mocking us and our religion,” says Sanjeev.

The boy told them that in Bulandshahr, he was beaten up by Umar and his family all the time.

Once, they threw a brick at him in anger, causing wounds on his head. He was made to do much of the housework, and treated like a servant. The family got him circumcised and often sent him to a mosque to study Islamic religion.

Rajesh, the youngest of Sanjeev’s staff who “knows Twitter”, recorded the statement of the child and posted the videos on a newly created Twitter account. This prompted police to intervene.

In the videos (accessed by this correspondent), the child is seen making all the allegations as stated above, and calling Umar and Babli as “abbu” and “ammi”.

He shows the wound on his head caused by the brick, and says, “Even my sister Zoya, who is younger to me, would beat me up and the entire family would just watch.

“But I am a good boy and I never raised hand on her,” he adds.

The boys says that Mithilesh and Soni are his “mausa” and “mausi” (close relatives from mother’s side).

Sanjeev says that after listening to the boy and examining the wounds, he decided that he would not let the boy go back to Zulfikar, no matter what.

He hid the boy from Zulfikar’s view and was determined to not share his whereabouts with him when police showed up at his office. The police took Rajesh and the boy with them. Rajesh works as a clerk in Sanjeev’s office and is pursuing a diploma course simultaneously, says Sanjeev.

Sanjeev and the group unanimously say that the police’s role in the case has been far from satisfactory. “They are behaving like we are the culprits,” says Sanjeev.

He says the police first picked up Mithilesh and Soni for questioning, and through them, reached Umar in Bulandshahr. Zulfikar continues to be absconding.

“For some reason, the police are after Rajesh. They took him to the police station, and asked him hostile questions. They rebuked him for posting the video on Twitter. All this was told to us by Rajesh,” says a staff member of Sanjeev, not wanting to be named.

“The poor fellow has been hiding from the police, shifting locations. We have asked him not to come for work for some time. His landlord asked him to vacate the house, complaining of too many police visits. Tell us, what business the police have to show up at his house unannounced repeatedly? He is just a whistle-blower,” says Sanjeev.

In my presence, Sanjeev dials Rajesh’s number, but it is switched off. “See, see for yourself,” he says.

The child, Sonu, continues to be at the government shelter in Govindpuram. Sanjeev says he plans to visit him soon. “I have no idea what happened after the police took him away from us,” he says.

Sanjeev says that he “kind of regrets” involving the police as they have put the child “in that jail”. “Sonu would have been better off with us,” he says. “But we didn’t know how law works. We only wanted to save him from Zulfikar,” he adds.

Sanjeev asks me, “Madam, is there any way we can formally adopt the child?”

I tell him I would ask about it to concerned authorities.

He says the boy has never been to school. “He will do good if he gets education. He is a smart boy. He told us everything in detail. Never once did he cry,” says Sanjeev.

I ask the staff if they know Mithilesh’s house. They say they don’t. One of them sighs that in Mithilesh’s and Soni’s absence (they are in jail), their own children must be like orphans.

Loha Mandi is an industrial area, where hundreds of workshops deal in iron products. The area has several clusters of jhuggis, where labourers, mainly migrants from Bihar and eastern Uttar Pradesh, live and work.

The police have not shared any more updates in the case on Twitter. Several calls made to the Kavi Nagar police station (the number is mentioned in the FIR) the same day of my visit, went unanswered. Calls made just before publishing this report also went unanswered.