Explained: Lunar Pits That May Pave Way For Expanding Human Presence On Moon 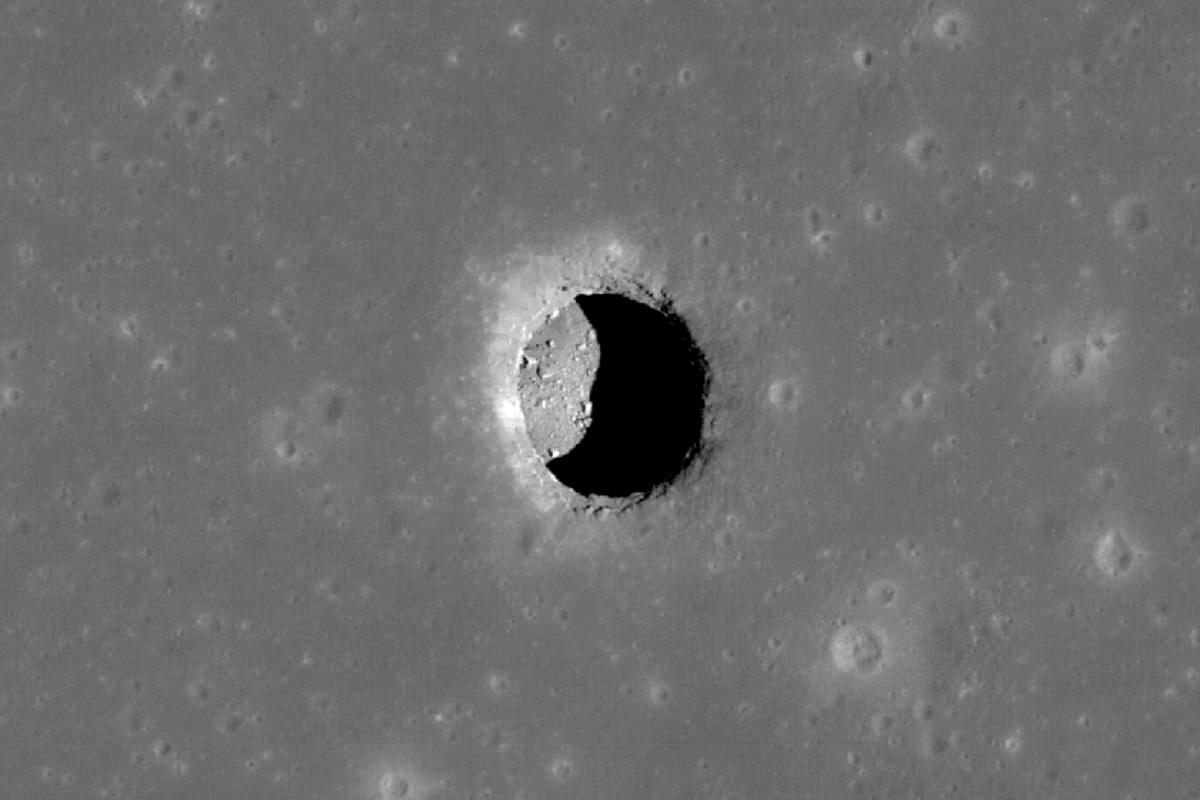 A team of scientists have made a discovery that could pave way for expanding the human presence on Moon in the future.

The pits range in size from about 5 meters across to more than 900 meters in diameter.

Most pits were found either in large craters with impact melt ponds – areas of lava that formed from the heat of the impact and later solidified, or in the lunar maria – dark areas on the moon that are extensive solidified lava flows hundreds of miles across.

In ancient times, the maria were thought to be oceans; "maria" is the Latin word for "seas." Various cultures have interpreted the patterns formed by the maria features in different ways; for example, some saw the face of a man, while others saw a rabbit or a boy carrying a bundle of sticks on his back.

Since their discovery in 2009, scientists have wondered if these pits led to caves that could be explored or used as shelters.

The pits or caves would also offer some protection from cosmic rays, solar radiation and micrometeorites.

The pits, and caves to which they may lead, would make thermally stable sites for lunar exploration compared to areas at the Moon’s surface, which heat up to about 127 degree celsius during the day and cool to minus 173 degree celsius at night.

The temperature variation on the Moon's surface makes it a difficult place for long-term exploration of the Earth's only natural satellite.

Some Lunar pits may be collapsed lava tubes

“About 16 of the more than 200 pits are probably collapsed lava tubes,” said Tyler Horvath, a doctoral student in planetary science at the University of California, Los Angeles, who led the new research, recently published in the journal Geophysical Research Letters.

“Knowing that they create a stable thermal environment helps us paint a picture of these unique lunar features and the prospect of one day exploring them," Petro added.

Lava tubes, also found on Earth, form when molten lava flows beneath a field of cooled lava or a crust forms over a river of lava, leaving a long, hollow tunnel. If the ceiling of a solidified lava tube collapses, it opens a pit that can lead into the rest of the cave-like tube.

Two of the most prominent Lunar pits have visible overhangs that clearly lead to caves or voids, and there is strong evidence that another’s overhang may also lead to a large cave.

“Humans evolved living in caves, and to caves we might return when we live on the Moon,” said David Paige, a co-author of the paper who leads the Diviner Lunar Radiometer Experiment aboard LRO that made the temperature measurements used in the study.

Horvath processed data from Diviner - a thermal camera - to find out if the temperature within the pits diverged from those on the surface.

Focusing on a roughly cylindrical 100 meter-deep depression about the length and width of a football field in an area of the Moon known as the Mare Tranquillitatis, Horvath and his colleagues used computer modelling to analyse the thermal properties of the rock and lunar dust and to chart the pit’s temperatures over time, NASA said in a statement.

The results revealed that temperatures within the permanently shadowed reaches of the pit fluctuate only slightly throughout the lunar day, remaining at around 17 degree celsius.

If a cave extends from the bottom of the pit, as images taken by LRO’s Lunar Reconnaissance Orbiter Camera suggest, it too would have this relatively comfortable temperature.

The team, which included UCLA professor of planetary science David Paige and Paul Hayne of the University of Colorado Boulder, believes the shadowing overhang is responsible for the steady temperature, limiting how hot things gets during the day and preventing heat from radiating away at night.