Not Only Of Religion And Literature, Sanskrit Was Also The Language Of Science 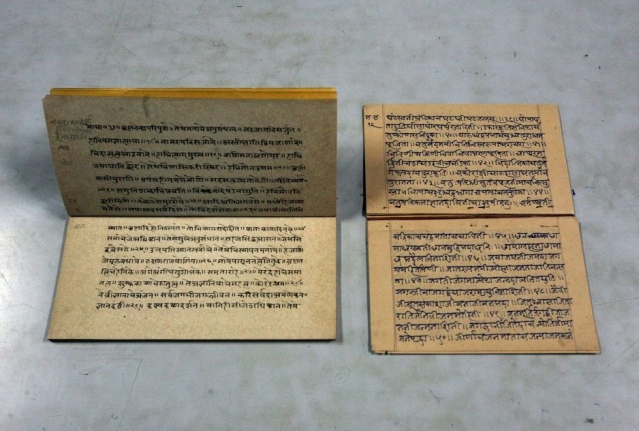 In 1999, I read the Tamil historical novel Sivakaamiyin Sabatham. Set in the seventh century CE, the novel tells of the siege of Kanchipuram, the capital of the Pallavas, by their rivals, the Chalukyas.

It is still one of the most popular books in Tamil Nadu, 70 years after its first publication. At one point in the story, Aayanar — an artist and sculptor — tells the Pallava king, Mahendra Varma, that his deepest desire is to know the secret technology of Ajanta paintings, which have lasted a thousand years without fading. The paintings of Ajanta are still there, a 1,000 years after the Pallavas and Chalukyas have disappeared.

In Kanchipuram, the Kailasanatha temple built by Mahendra Varma’s great-grandson Rajasimha Pallava in the eighth century has paintings in the Ajanta style, which have sustained damage but what remains hasn’t faded. The contemporary Pandyas built a Jain cave temple at Sittannavasal, which has equally remarkable paintings.

A Heritage Of Science And Technology

These struck a severely discordant note. How many advertisements do we see on television for the latest paints that last 20 years? Enamel paints manufactured in large chemical plants, based on the very latest technology, brought to life by the most brilliant chemical engineers of the last century.

Their great selling point is that they last ‘20 years’ — one-hundredth of the 2,000 years that Ajanta paintings have lasted, in ‘primitive’ caves, sculpted by a hammer and chisel.

What other remarkable scientific and technological achievements of ancient Indians was I missing?

By sheer coincidence, I happened to attend a series of lectures about the ‘Oral Traditions of the Sanskrit language’, by Prof Swaminathan, a retired IIT Delhi professor of mechanical engineering.

He explained the Siva Sutras (also called Maheshvara Sutras) and how Panini used them to write extremely compact rules of grammar for Sanskrit. The Siva Sutras and Panini’s sutras reminded me starkly of the Backus-Naur notation, that every computer science or engineering student learns in college. But, wait! What was Panini doing, composing Sanskrit grammar in Backus-Naur notation?

Why is Panini never mentioned in any computer science course? Why is not a single discovery of Baudhayana, Aryabhata, Brahmagupta or Bhaskara ever taught in a mathematics or engineering course? In any school or college?

Seventy years after Independence, you can hardly blame British colonialism.

English is the language of science, we are told, though most of the scientific vocabulary is in Greek or Latin. The very names of the sciences — Physics, Biology, Zoology, Geology, Astronomy — come from Greek.

Chemistry is an exception, adapted from the Arabic word Al Chimia (or Alchemy). The different fields of Mathematics — Geometry, Trigonometry, and Arithmetic — have Greek origins. But Algebra comes from an Arabic word; Calculus from a Latin word.

Newton wrote his most famous Physics book, Principa Mathematica de Naturalis in Latin, not English. When Antoine Lavoisier coined new words for the modern Chemistry he discovered, he did not use French; he chose Greek and Latin. English words like soda and pot ash, were Latinised into Sodium and Potassium.

Did the Sumerians, Chinese, or ancient Indians use Latin or Greek? Or even need them? Obviously not. It was when I started reading the Aryabhateeyam in its original Sanskrit (with English translation assisting), that I realised what a rich vocabulary we are ignorant of.

How about these words : diameter, circumference, orbit, equator, hypotenuse, sine?

Here’s the stunner: the first row of Sanskrit words have the exact same meanings as the second row of English words!

Let me explain this Sanskrit statement, word by word:

Rephrased grammatically in English : “A circle’s area equals half the diameter multiplied by half the circumference”.

This was stated in Sanskrit by none other than Aryabhatta. It is the seventh sloka in his Aryabhateeyam.

Let me propose two quick quizzes: what did these people invent or discover?

Here comes the second quiz, with a different set of names. What did they discover or invent?

You can search the internet to verify your answers. But did you get all seven answers correctly in the first list? How did you fare with the second list? Did you even recognise all the names? (Confession: I didn’t know three of them 10 years ago).

If you guessed that Aryabhatta invented zero or discovered gravity or the heliocentric theory, give yourself negative marks. He didn’t.

But the people on the second list had one thing in common. They all used Sanskrit as the language of science. Why Sanskrit?

Sanskrit was not only the language of religion, and literature, it was also the language of several sciences, law, justice, administration, economics, rhetoric, logic, and several arts, namely music, dance, painting, sculpture, architecture, etc.

It served the same function in India and countries to the east of India, that Latin did, first in the Roman empire, then in Europe, until, perhaps, the twentieth century; what Mandarin did in China from Confucian times up to perhaps today; what Arabic did in the realms of Islam. It was the link language of a cultural continent, across several kingdoms over the span of several centuries, even millennia.

I have provided only one example in each field. In reality, each field has several books, written by scholars from various regions or cities, across several centuries. We never hear of them, because over time, Sanskrit has become more alien in India than Greek or Latin.

When most Indians hear Sanskrit or hear of it, it is as the language of the Vedas, or at best the language of beautiful poetry as given by Kalidasa or Jayadeva. One popular understanding is that it is a dead language, steeped in the superstition of religion.

The only people talking in public about anything Sanskrit are people quoting philosophy; once in a blue moon, perhaps a musician or a dancer. Or, a chorus chanting Sanskrit mantras as background music in a Star Wars movie.

The libraries of Alexandria and Nalanda may have been destroyed by iconoclastic invaders, but the library of all Sanskrit knowledge is vandalized every day by our collective ignorance, and deliberate negligence.

That is ridiculous. We can change that.