Roger Penrose: A Life Of Science In Platonic Aesthetics 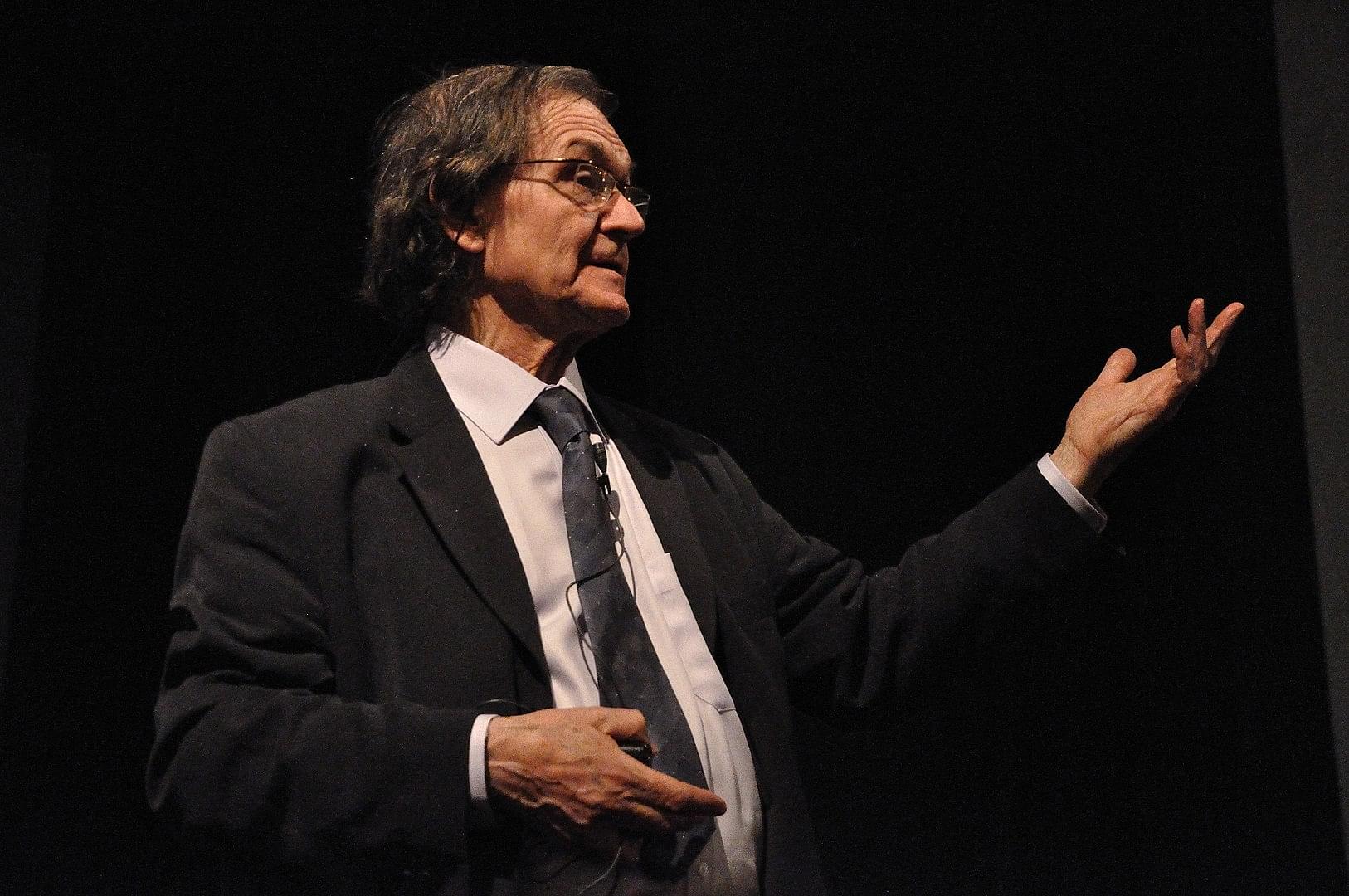 The awarding of the 2020 Nobel physics prize to Roger Penrose has come late, but, as it is said, better late than never.

Penrose is one of the greatest mathematicians of our generation. His contribution to cosmology has moved human knowledge further into the realm of never-exhausting beauty and wonder.

As early as 1998, physicist John Wheeler wrote about Penrose in a volume celebrating his life and work:

Over the years, Roger Penrose has won a great prize for us all. A deeper understanding of the structure of spacetime, especially the causality relationship between one point of spacetime and another, probably the most important prediction of general relativity, since it seems to imply that spacetime has a beginning or an end.

Penrose's physics guru was Dennis Sciama. When Penrose entered Cambridge as a graduate mathematician, it was Sciama who got him interested in physics, particularly cosmology.

At that time, the dominant and favoured speculation about the origin of the universe was the "steady-state theory" – of which Sciama was a strong advocate. However, the discovery of the cosmic background radiation changed the status of the theory.

As early as 1927, Monsignor Georges Lemaître, a Catholic priest and astronomer, had formulated based on Albert Einstein’s theory of general relativity a ‘big bang’ origin of the universe – which, of course, was not favoured among physicists at the time.

In fact, the name ‘big bang’ was suggested derisively by the eccentric physicist, polymath, and strong advocate of steady-state theory, Fred Hoyle.

The identification of the cosmic microwave background radiation changed all that. It strongly favoured the big-bang scenario.

Penrose writes in the preface to his book Cycles of Time: An Extraordinary New View of the Universe:

With great courage and scientific honesty (when the CMB data became better established), Dennis Sciama publicly repudiated his earlier views and strongly supported the idea of the Big Bang origin to the universe from then on. Since that time, cosmology has matured from a speculative pursuit into an exact science, and intense analysis of the CMB—coming from highly detailed data, generated by numerous superb experiments—has formed a major part of this revolution. However, many mysteries remain, and much speculation continues to be part of this endeavour.

Penrose explains in The Basic Ideas of Conformal Cyclic Cosmology:

Instead, each aeon of the universe, in a sense “forgets” how big it is, both at its big bang and in its very remote future where it becomes physically identical with the big bang of the next aeon, despite there being an infinite scale change involved, on passing from one aeon to the next.

A caveat is needed here. These cosmological models are based on strong mathematical formalism and deeply penetrating cerebral work that can only be compared with the Puranic tapas. They are not fanciful flights of wild imagination.

An attitude that goes like "this is already in our scriptures" can impair our ability to experience the beauty of such models and the real challenges they present for the advancement of human knowledge.

It is true that Hindu cosmology is far richer than most traditional cosmologies in conceiving almost all possible scenarios – from cyclic to parallel universes. But ultimately, what will matter is how much of this civilisational treasure chest is used in emboldening our physicists and mathematicians in their odyssey of expanding and deepening our understanding of the universe.

Another important contribution of Penrose is the Penrose tiling – ‘the most well-known set of aperiodic tiles.’

Interestingly, he used the golden mean properties of the triangles within the pentagon in creating his tiles. At last, the tiles he arrived at are called Penrose tiling.

This can be seen in oriental architecture. Particularly famous are the geometric designs in mosques in Cairo and other centuries-old mosques that are similar to Penrose tiling.

Given that the Hemachandra-Fibonacci numbers play an important role here, it would be interesting to see if these exist in our traditional designs including kolams.

Penrose tiling is used in the study of crystal structures.

The discovery of Penrose tiling in nature has led to the question that if they were present already, why were they not observed by science before they were arrived at by the mathematician. One answer that has now become a cliché in the circles of philosophy of science is that science cannot see if it does not have the language to describe what it sees.

In his book The Emperor's New Mind, Penrose strongly rejected the reductionist computational model of mind and consciousness, crisply stated by Marvin Minsky as minds are computers made of meat.

The book is interesting not only for the repudiation of the computational model of consciousness but also for the advocacy of a real universe.

One should remember that in the continued legacy of the Bohr-Einstein debates, Penrose stands with Einstein. He argues for a physical universe and Platonic realm. He would like to imagine that "the interesting and profound mathematical ideas somehow have a stronger existence than the uninteresting or trivial ones".

In The Emperor’s New Mind, Penrose reverses this question:

There must, indeed, be some deep underlying reason for the accord between mathematics and physics, i.e. between Plato’s world and the physical world. To speak of 'Plato’s world’ at all, one is assigning some kind of reality to it which is in some way comparable to the reality of the physical world. On the other hand, the reality of the physical world itself seems more nebulous than it had seemed to be before the advent of the superb theories of relativity and quantum mechanics. The very precision of these theories has provided an almost abstract mathematical existence for actual physical reality. Is this in any way a paradox? How can concrete reality become abstract and mathematical?

Penrose is not a monist. He does not consider these two realms to be the same despite his sympathy for such a view. He weaves a grand tapestry in which consciousness, tiling of crystals, and the underlying structure of the universe all get connected.

Penrose's Shadows of the Mind can be considered a sequel to the Emperor's New Mind. In this book, he goes beyond repudiating the computational model and proposes that the "brain might be able to make use of subtle and largely unknown physical principles in order to perform the needed non-computational actions".

In Shadows, Penrose points out the bigger picture – of how quantum physics is changing the way we look at consciousness and do the neuroscience of consciousness.

If in The Emperor's New Mind the view of existence he unveils is decisively not non-dualistic, in Shadows he points at the experience of non-dual unity that consciousness confers upon all of us – "a unity with the workings of Nature is potentially present within all of us, and is revealed in our very faculties of conscious comprehension and sensitivity, at whatever level they may be operating".

Penrose's work in the field of consciousness is in collaboration with Dr Stuart Hameroff, professor of Anesthesiology and Psychology, and director of the Center for Consciousness Studies at the University of Arizona.

Here too the contribution of Penrose and Hameroff should be recognised as pioneering in what is now fast becoming an important field – quantum biology – though one needs to be cautious to avoid new-age pitfalls.

In the Penrose-Hameroff hypothesis, consciousness is produced because of 'objective reduction'. This happens at the spatial dimension of 10^-33 cm and at a time scale of 10^-43 seconds. With an increased number of participants, these reductions evolve and ultimately create the subjective experience. Penrose ingeniously connects this reduction with the Platonic realm because, according to him, objective reduction happens with constraints of 'Platonic values', which are inherent in the Planck-scale space-time geometry.

An important underlying quality of Penrose that runs through all his works is his approach to the beauty of mathematics coupled with his uncompromising scientific rigour. In his recent book Fashion, Faith, and Fantasy in the New Physics of the Universe, he explores the question of the choice between simplicity, beauty, truth, and subjectivity:

It should be made clear that the question of aesthetic judgment in physics is more subtle than just what is often referred to as Occam’s razor – the removal of unnecessary complication. Indeed, a judgement as to which of two opposing theories is actually the “simpler”, and perhaps therefore more elegant, need by no means be a straightforward matter.

Penrose proceeds to explain this idea further, comparing the mathematical approaches to gravity by both Isaac Newton and Einstein:

The quoted passage is stopped there because of the length constraint. However, the entire passage, as it goes into the intricacies of simplicity, accuracy, and aesthetics, should be abridged and made a part of curricula for not only graduate science students but also for students at the high school and undergraduate levels.

It is important to see that for Penrose, mathematics is deeply intertwined with the Platonic philosophy of the Greeks. The way science and ancient philosophy have interacted in the West is a good example of what a good grounding in traditional philosophies can do for the exploration of science.

In India, a mind as great (though such comparisons are largely meaningless) as Penrose was that of George Sudarshan. He too looked into physics and at the mysteries of the universe with strong roots in ancient Hindu Darshanas. He showed what could be achieved with such anchoring.

Unfortunately, despite being nominated multiple times for the Nobel prize, he was not awarded it. But the greater tribute to his legacy would be to create a curriculum where – whether in the arts or science, humanities or literature – Indian Darshanas can inspire and motivate students to further human knowledge and enable humanity to prosper in peace.