Too Late In The Day? Dr MS Swaminathan Clarifies His Views On GMO 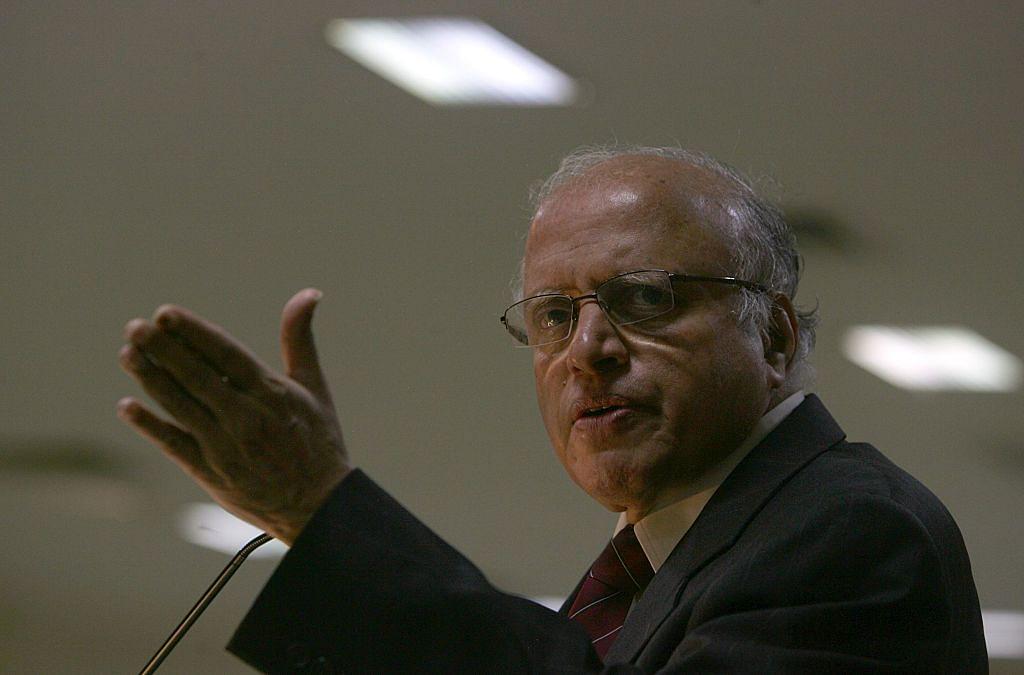 Recently, a review article published in the journal Current Science has been a topic of fierce debate, and even outrage, in the scientific community. This article was authored by Dr P C Kesavan, and Dr M S Swaminathan, the latter being regarded as the father of the Green Revolution in India.

The criticism against the piece is that it mocks and denigrates genetically modified organisms (GMO) using wrong and selective data. The fear is that anti-GMO activists would now use the article and Dr Swaminathan’s credibility to thwart research and progress on GMO.

In this context, the below exchange between Dr Vijay Raghavan, the present Principal Scientific Advisor to the Prime Minister, and Dr M S Swaminathan becomes important. In the exchange, Dr Swaminathan first clarifies his position on GMO. In the reply to it, Dr Raghavan then lists the problems with the former’s article in Current Science.

An article by Prof Kesavan and me in Current Science seems to have caused considerable concern and confusion. The last para of the article reads as follows:

Genetic engineering technology has opened up new avenues of molecular breeding. However, their potential undesirable impacts will have to be kept in view. What is important is not to condemn or praise any technology, but choose the one which can take us to the desired goal sustainably, safely and economically.

As far as I am concerned, the following has been my view throughout.

It is unfortunate if the article has created the impression that I am opposed to GM as a technology. Technology always creates divergent viewpoints. For example, the gene editing technology (CRISPR) is now undergoing divergent views. This is why it is important to have a transparent regulatory mechanism which is supported by professionals, government departments and the private sector. I shall be grateful for your views on how to clarify our views on biotechnology. After all we started genetic engineering research in 1990 for transferring genes from mangroves to rice for salt tolerance.

Genetic modification is the technology of choice for solving abiotic problems like drought flood, salinity etc. It may not be equally effective in the case of biotic stresses since new strains of pests and diseases arise all the time. This is why MSSRF choose mangrove for providing genes for tolerance to salinity.

I have always said that the green revolution should not become a greed revolution and therefore we should ensure that the long-term productivity of the soil and water also becomes a part of the technology. I also believe that GMO is the best pathway for breeding crop varieties with resistance to abiotic stress and will hence become more important in an era of climate change.

I thought I should let you know that there has been some misunderstanding about my views to ensure sustainable productivity by avoiding the spread of greed revolution resulting in the undermining of the long term production potential. In this context, Norman Borlaug and I shared the same concern for ensuring sustainable food and nutrition security.

I hope you are all well. I send you and your family my good wishes for your health and happiness during the Christmas and New Year,

Many thanks for your e-mail. I am very glad that you took the time to reach out and explain the recent Kesavan and Swaminathan ‘Review’ in Current Science. I am also pleased to hear your clarifications and views on new technologies in agriculture. As requested my you in your mail may I respectfully submit my very serious concerns about the Review?

In your e-mail, you highlight the last paragraph of the Review:

‘Genetic engineering technology has opened up new avenues of molecular breeding. However, their potential undesirable impacts will have to be kept in view. What is important is not to condemn or praise any technology, but choose the one which can take us to the desired goal sustainably, safely and economically.’

Yet, as scientists we must read and understand the article as a whole as not look at it selectively. We then distil its key messages. A review article in science usually analyses the literature, presenting multiple examples in an area. It then summarises the state of the field. Next it summarises the consensus in the field and then gives the view of the authors stating why they agree or disagree. The Kesavan and Swaminathan piece is more of an opinion piece than such a review. But that is a quibble.

Whatever the nature of the piece, there is a requirement that any article:

a. Not selectively omit inconvenient results.

b. Not selectively represent work that suits one’s hypothesis as valid without referring to the other work which discredits it and explaining the rationale for the choice made.

c. Not misrepresent referenced work. That is, if the work says one thing but the article (the review in this case) refers to its as saying the opposite or something very different.

The Kesavan and Swaminathan review starts by pointing out how fertilisers, pesticides, high-yielding varieties of crops etc. ushered major changes in agriculture but also raised major concerns for sustainability and ecology. One cannot but agree with such a generalisation (Similarly, it can be argued that extensive mining, the steam locomotive, the internal combustion engine, an addictive use of fossil fuels, greenhouse gas emissions, a huge livestock population, air-travel, shipping, the chain-saw, ocean trawlers etc. have contributed to pushing our planet to its edge. One cannot but agree with such generalisations too) . Thus, in this part of the article, while pointing out important concerns of intensive agriculture, the review neglects to put this in the context of broader issues of human intervention. In that, in this part, it can charitably be said to have merely missed an opportunity. But, the review uses the above to make a case for how the unintended consequences of technologies per se can have a negative impact. Here it omits to make the distinction between the technologies and the nature and extent of their use by human agencies. These consequences of technologies, are then used to segue into views on genetically modified (GM) crops, the main thrust of the review; arguing that one must be wary of technologies in general.

In this section on GM, sadly, the review is even more severely flawed. The specific instances where results are selectively omitted, selectively represented or mis-represented are rife. Each of these egregious, I am sure will be addressed in response to your review, by scientists soon. Indeed, the bulk of the scientific points made in this part of the review have been raised previously and have been scientifically discredited widely and one has to only study the literature to see this. The review puts in one bin the four components of efficacy, safety, commercial interests and regulation. And, above this, the review seamlessly flows from one type of genetic modification to another, clubbing them all together. This is not only flawed scientifically, it has the implication that those who defend the science or the regulatory system are defending specific commercial interests or loss of biodiversity.

Finally, the review makes extraordinary generalisations about the Indian regulatory system. It alleges both incompetence and collusion. These are very, very serious allegations against entire committees and the Government. (It is this same structure, incidentally, which has put in place and monitors the regulation of The GM research at the MSSRF, which your letter refers to. ) In a complex area that involves many fields, India’s regulatory system has steadily ratcheted its quality over the years. It acts in accordance with national law, international protocols and best-in-class procedures. Critical analysis and criticism is always welcome. But, gratuitous generalisations undermine years of work and, more importantly, cause deep and lasting damage to entire areas of research and consequently to our people at large.

The use of GM technology and its release in agriculture is and must be regulated and done well. Experts, as also the authors, know that there are many, many kinds of such GM technologies. Some involve loss-of-function, others, involve gain-of -function, yet others involve new function. There is research and development in the publicly funded sector and in the private sector, the world over. There are commercial interests and public interest, which many overlap in one case and not in another. There are vested interests in all parts of the spectrum and there also very genuine people across the spectrum. There are environmental and biodiversity issues which may be very critical in some cases and less so in another. There are new technologies, which may require new regulatory steps.

In these and in all matters, we as scientists, are obliged to take a careful and rational view. Evidence must always be critically examined and expressed with neither fear nor favour in our research work and in the opinions and advice we publicly, privately and officially give. We must have the courage to change our views when presented with new contrary evidence.

What needs to be done with the evidence, in terms of process, policy or action is another, equally complex area that involves interacting with society, and dealing with reality and perceptions, with real and imagined concerns, economics and so on. This is also a difficult task and scientists have a critical role here too,

Today’s world is at a tipping point. In the Anthropocene, humans are the stewards of the planet’s future. Difficult local and global decisions have to be taken by the peoples of the world. For this, the public must have access to the complexities of every debate, conveyed by scientists in their writings and talks. Neither the hubris of technologies nor the blanket denial of their roles makes sense.

Eminent scientists and global leaders such as you have participated and coordinated discussions on these issues. Their voice carries a special impact in society. Their missteps also have consequences that are immense, sometimes very damaging and lasting. In a large country like ours, the damage can be vast and deep.

I have been frank and critical because, quite simply, I would be negligent if I were otherwise. We stand by the entirety, not selective parts of our publications and are free to revise or views or not. Your mail points out some aspects that you particularly stress. I must presume that you nevertheless continue to stand by the entirety of the publication. In any event, with the Kesavan and Swaminathan opinions in public, I am sure that various protagonists will publicly respond and discuss, which is what should be done in science

I deeply admire and applaud your many contributions to science, your wisdom and your courage and your national and international contributions. We all look forward to your continued role in science and in policy.

Note: The content of Dr Swaminathan’s mail to Dr Raghavan is the same as that has been posted publicly elsewhere.