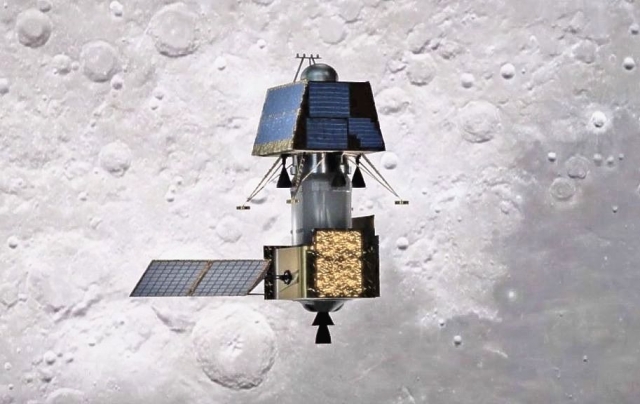 An artist’s impression of the Chandrayaan-2 Orbiter and Lander linked over the Moon.

It’s been ten days since Chandrayaan-2’s Vikram-Lander hard-landed on the lunar surface while attempting the closest-ever soft-landing near the Moon's south pole.

Questions still remain about what happened during the landing but we now know that the Lander hit the lunar surface nearly 500 meters away from the designated landing site, did so at a velocity much higher than it was supposed to, and it does not have the orientation it would have had had it soft-landed.

The Lander has been lying silent on the surface of the Moon since. While ISRO tries, aided by NASA’s network of ground-based antennae that make up the Deep Space Network, to talk with the Lander, the chances of establishing contact with it are shrinking with every passing day.

That’s not to say that there was much hope — the key parts of the Lander, including its antenna, may have suffered damage due to the hard-landing. And even if they survived the hard landing, miraculously, the antenna may not be oriented optimally. This is possible because the Lander, which carries the antenna, is itself ‘tilted’.

The odds are long. The Lander’s mission life of one lunar day, equivalent to 14 earth days, ends later this week. Once the sun sets at Vikram’s landing site (at the end of the lunar day) and the cold lunar night kicks in, the temperature may drop to around -180º Celsius.

The Lander is unlikely to survive in such conditions, and this would have been the case even if the Lander had managed to soft-land on the lunar surface.

When the 14-day window shuts, the only piece of Chandrayaan-2 that will remain operational is the Orbiter. It is currently orbiting the Moon, and was in an orbit of 96 km x 125 km when ISRO last reported.

All we know about the Vikram’s fate after it hit the Moon’s surface has come from the Orbiter, which has managed to locate the roughly eight-feet-wide Lander.

Of the 14 payloads that the Chandrayaan-2 mission carried to the Moon, eight are on board the Orbiter. The remaining six, including NASA’s Laser Retroreflector Array (an instrument that helps make precise measurements of the distance to the Moon), were on the Lander with the rover in its belly.

With the Lander going incommunicado, these eight payloads are all that’s left of Chandrayaan-2 as far as science is concerned.

A miniature version of the Terrain Mapping Camera that was onboard Chandrayaan-1, this instrument will be used to create a high-resolution 3-dimensional topographical map of the lunar surface, including the far side and the polar regions.

The TMC will map the Moon in the panchromatic spectral band with a resolution of 5 m and on 20 km swaths. In this band, data is available at a high spatial resolution.

The data collected by the TMC will give clues about the Moon's evolution. It can be used for morphological mapping, studying the lunar mineralogy and geology, and developing a better understanding of the surface processes on the Moon.

A continuation of the X-ray Spectrometer on Chandrayaan-1, the CLASS instrument on board the Chandrayaan-2 Orbiter will examine the presence of elements such as Magnesium, Aluminium, Silicon, Calcium, Titanium, Iron, and Sodium.

It will prepare a map of the diversity and distribution of elements at resolutions of a few tens of km. The instrument will also study lunar lithologies (types of rocks).

CLASS will perform these tasks by measuring the characteristic X-rays these materials emit when excited by the rays of the Sun, which will provide a natural source of X-rays. (Here’s how it works).

Along with the mineralogical data collected by the TMC, the CLASS findings will help scientists arrive at a comprehensive picture of lunar surface chemistry.

This payload will study the X-rays that the Sun and its corona emit and measure the intensity of solar radiation in these rays. In the process, it will compliment the lunar elemental abundance studies done by the CLASS instrument as it is essential to have simultaneous and accurate measurement of X-ray from both the Moon and the Sun.

Among the most critical functions of this payload was the one to capture high-resolution pictures of the designated landing site before the separation of the Vikram-Lander to search for potential hazards and ensure that it lands safely on a flat surface.

A Digital Elevation Map of the landing site was to be made using these images. These images were to be used for research after the Lander’s separation.

ISRO attempted a soft-landing close to the lunar south pole because it is here that water ice is believed to be most abundant. Due to the Moon’s geometry, sunlight strikes at low angles in the polar regions of the Moon, only skimming the rims of craters and leaving the deep interiors cold and in shadow.

A continuation of the CHACE payload on Chandrayaan-1's Moon Impact Probe, this instrument — a spectrometer — will be used for the in situ study of the composition and distribution of the tenuous lunar exosphere. The study will cover the polar regions of the Moon, including the permanently shadowed parts.

The DFRS experiment will study electron density (total electron content) in the Moon’s ionosphere, how it changes with altitude and its evolution.

The dual frequency (L- and S-band) SAR on board the Chandrayaan-2 Orbiter, an upgraded version of Chandrayaan-1's S-band miniSAR, will also contribute to the study of the permanently shadowed regions near the lunar poles.

It will help in the detection and mapping of water ice in the permanently shadowed crater. Among other things, it will also be used for mapping the thickness of the lunar regolith — unconsolidated material that blankets the Moon’s surface.

This is the first L-band radar mapper to orbit the Moon. Its addition has given the SAR greater depth of penetration — about 5 m, which is twice that of the S-band.

If all these eight payloads on board the Orbiter work as planned, ISRO will be able to comprehensively map the Moon and, in the process, find answers to the many geological curiosities that Chandrayaan-1 gave life to.

Given that ISRO has saved extra fuel on board the Orbiter (as, among other things, GSLV Mark-III’s cryogenic third stage had over-performed), it is likely to survive longer than its planned life of one year and will have ample time to perform these tasks.

ISRO has said that the Orbiter may keep going for around seven years, but nothing is certain — Chandrayaan-1 lost contact with ground stations just 10 months into what should have been a two-year-long rendezvous with the Moon.