Iranian Football -1, The World -0 : At The FIFA World Cup, A Story Of Indomitable Iranian Grit Unfolds Amidst Political Games 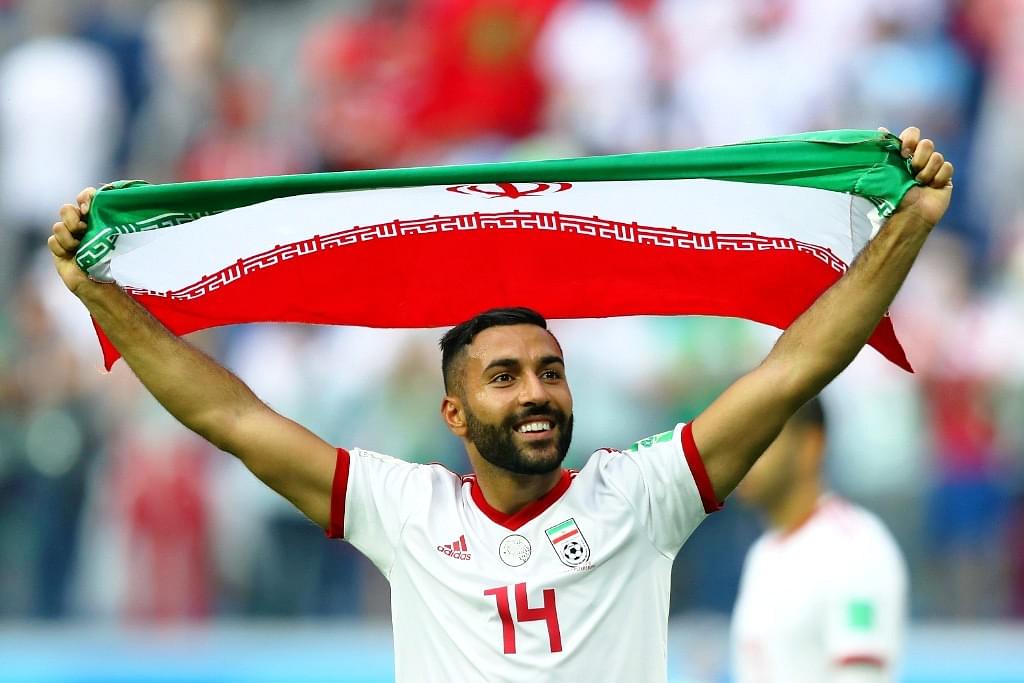 Amid loud cheers by Iranian fans, the Krestovsky Stadium in Saint Petersburg in Russia erupted in celebration as the final whistle was blown at the 96th minute in the third FIFA World Cup match between Iran and Morocco last week.

Iran had secured the first Asian victory at the World Cup, and its second win after 20 years, in the prestigious international tournament. But few outside Iran knew of the mammoth odds the Iranian football team – ‘Team Melli’ – had to overcome as the scoreline read Iran - 1, Morocco - 0.

To put it simply, the Iranian victory is a win for the sporting spirit – central to the tournament and to the sport at large. From being dumped outright by sponsors, to mixing politics with sport, the Melli story is one of the unstoppable human grit.

In a shocking turn of events, the team’s official football boots sponsor, Nike, withdrew its supply of football boots to the team on 13 June, just two days ahead of their first match at the World Cup in Russia. Being an American company, while Nike cited renewed US sanctions on Iran as the reason for its inability to supply boots to the Iranian team, it left the players in a bind, so close to the tournament. Nike faced international backlash for the move, along with widespread condemnation within Iran itself, but that’s a different story.

Unfortunately, this was not new for the team. While several jersey sponsors were scrambling to get contracts from all the other teams at the World Cup, the Iranian team struggled to find even one. The team finally signed a deal with Givovo, an Italian brand. The contract, however, had to be dropped following an outcry from athletes and the media due to the poor quality of the jerseys. Team Melli hence, was again without a sponsor. In the end, the team decided to use Adidas jerseys for the tournament. But while other teams made millions of dollars through the jersey sponsorships, the Iranian team had to pay for their own jerseys. Although Adidas offered a 70 per cent discount on the jerseys, the entire episode highlights how global politics proved to be hindrance for the team’s preparations.

While players from other teams receive personally customised kits, the Iranians had to reportedly customise the jerseys themselves.

The team also lost out on the royalties other teams make through jersey sales. Till date, the only jersey not released for retail sale is the Iranian one. Jersey sales make a significant chunk of the revenue made by teams which is ultimately utilised for the development of the sport at the team’s home. All this, despite Iran being a football crazy nation, with its team being arguably the best in Asia.

The team faced all these pressures even as it famously was the third team to qualify for the World Cup behind hosts Russia, and title contenders Brazil. The team enjoyed an unbeaten streak through the qualifiers. However, global politics took another toll on the team as they failed to play friendlies against other international teams in the buildup to the contest.

Iran was supposed to play Greece in the friendly on 2 June, with the match to be organised in Istanbul in Turkey. However, it was cancelled amid worsening ties between Greece and Turkey. The Iranian football federation suspended footballing ties with Greece after the Greek federation called off the match. The Iranians, however, tried to organise another friendly with Kosovo, but negotiations between the two nations’ federations again broke down. Politics, again, took its toll on the team.

Not just global, the football team faces huge pressure from internal politics as well. Iran lies in a quagmire, a country with a largely modernised society ruled by a repressive Islamic theocracy. Women of the football crazy nation have been banned from stadiums since 1980, one year after the Islamic Revolution. And during every major football event the issue comes to fore.

Several Iranian footballing greats have called on the government to lift the ban, famously Ali Karimi, widely regarded as the best Iranian player of all time, and also the current captain Masoud Shojaei. However, their statements have invoked strong reactions from Islamic clerics, who enjoy almost total control over day-to-day life in Iran. Scenes of female fans rejoicing at the World Cup match in Russia have hence evoked strong passions in the West, where even the thought of such a ban is unimaginable.

However, politics and sport mixes further in Iran. During the final 2010 World Cup qualifier against South Korea, seven of the Iranian team’s players played with green bands to signify their support to the ‘Green Movement’ going on in the country at that time. The movement was largely against alleged election fraud by the then Iranian president Mahmoud Ahmedinejad. However, the movement was crushed and the seven players were reportedly banned for life from playing for the national team. Iranian media reported that the players had ‘retired’. Shojaei was one of the seven.

Shojaei was again in the line of fire in 2017 for having played against Israeli club Maccabi Tel Aviv as part of his club career. Radical elements in the administration, and also several newspapers demanded that Shojaei, along with another Iranian player who played the match, be banned from the national team. Notwithstanding, Shojaei continues to lead his team at the World Cup.

Despite the challenges, both abroad and at home, the Iranian team goes on. And probably no-one appreciates the struggle more than the Portuguese team’s manager Carlos Queiroz – a veteran with over 25 years of coaching experience including sides like Real Madrid, Manchester United (assistant to Sir Alex Ferguson) and Portugal.

“I’ve never, in all my career, seen players deliver so much after receiving so little as I have with these Iran boys,” Quieroz was quoted as saying by The Washington Post.

He continues, “we struggle to travel, to have training camps, to bring opponents, to buy equipment. Even buying shirts is a challenge. But these challenges helped me fall in love with Iran. These difficulties become a source of inspiration to the people, it makes them more united, to fight for their country. These boys deserve a smile from the rest of the world.”

The team plays Spain tonight, and are the obvious underdogs in the contest. But then again, that hasn’t ever stopped the team from springing a surprise.