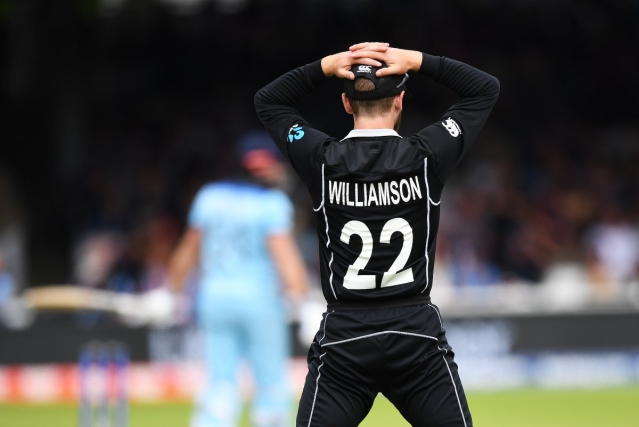 My good friend Dakshinamurthy Venkatesh Babu (‘Babu’ for short) is an avid fan of sports and films. That is an understatement because I cannot capture in words his intensity, energy and enthusiasm for both. So, I am not trying. He loves Roger Federer so much that neither Federer himself nor Federer’s wife would be able to match him. It takes longer for Babu to recover from the losses suffered by Federer on tennis courts than for Federer himself.

You can imagine what he must have been going through sitting in the upper half of the Edrich stand at Lord’s cricket ground on 14 July with the rest of us when his heart and mind were in the Centre Court at Wimbledon. This is where technology failed Babu and the sport-loving humanity. It has not progressed to a point where they could be at two different places at the same time. Many cricket-tennis enthusiasts would have loved to be at Lord’s and at the Wimbledon Centre Court on the afternoon of 14 July. They could not. So, they watched history being made in one place while they heard of history being made in another.

Roger Federer lost a match that he, for all practical purposes, had won. He was serving for his ninth Wimbledon title and could not hold serve. Federer had won more games in the match and hence scored more points than Novak Djokovic in that match but, in the end, it was Djokovic who was crowned the Wimbledon champion for the fifth time. Federer’s reactions were as impressive and inspiring as the man and his craft are.

May be, some spiritual practitioners who know how to do these things and even teach a select few might become a little more sought-after for this specific purpose, after the events of Sunday, 14 July 2019.

On my part, I was happy to be at the Upper Edrich Stand at Lord’s in Row J in seat number 67 to witness the bizarre ways in which life unfolded on 14 July for cricket players of England and New Zealand. Again, it was due to Babu who had taken the initiative to organise this visit for the rest of the nine of us. Left to myself, I would have watched it in the sweltering sauna-like living room of my apartment in Sri City (IFMR Business School campus) in Andhra Pradesh or, with some luck and planning, in the more comfortable environs of my apartment in Singapore, with my wife and son.

My bragging rights to future generations that I was present at the ‘one and only cricket match that could ever end like this’ is dedicated to Babu!

We watched a cricket match at Lord’s on Sunday that may never again be repeated. Perhaps, the way it was concluded should not be repeated at all. That would be better for the game.

Osman Samiuddin writes in Cricinfo that if ever a proof was needed that life was random, the cricket World Cup final match of 2019 served it up. One should not be surprised that an outcome like this forces humans to dig deeper and wider into philosophical realms to make sense of it all.

For the record, I had come to a different conclusion. Both Kane Williamson and Roger Federer were born on 8 August, nine years apart, and they both had a heart-breaking day. It is equally true that both of them are the finest blokes you could find, not just in their respective sporting arenas, but outside of them too.

Many things that happened on 14 July at Lord’s were not random. No, I am not saying that there was a conspiracy to make England win. Far from it.

Martin Guptill reviewed the ‘LBW’ decision against him. The review went against him, denying Ross Taylor a review when the umpire was clearly in the wrong. Some of us who had a direct view – as I had – felt that the ball had hit him high up, on the thigh.

Guptill ran out M S Dhoni with a brilliant throw in a crunch situation in the semi-final but he, inadvertently, ended up conceding four overthrows, in a most bizarre and cruel twist to the game when New Zealand had almost put the match out of England’s reach.

Then, Guptill was run out himself, inches from the crease, sprawling, almost like Dhoni was, in the semi-final.

There were other minor-major errors. Quite what Mitchell Santner was thinking on the last ball of the innings he faced is unclear to us. He not only failed to make any attempt to make meaningful contact with the ball but also failed to take a run. It mattered in the end. In a big way.

The big difference, for the worse, on the day, was Trent Boult himself. He was at his best against India. He was well below par on this day, conceding at least one boundary per over.

As for England, did they deserve to win the tournament? I wish I had no doubt in my mind that they deserved. They found a very purposeful and effective bowler in Chris Woakes and Ben Stokes, born in New Zealand, had carried their hopes alive in many matches. He is world class. Jofra Archer, a Barbadian import, is a bowler to watch. But, the more impressive teams in the league phase were India and Australia. England, except on placid tracks, came up short.

Finally, about the rule book. Simon Taufel, a former respected umpire, notes that England should have gotten only five runs off the overthrow rather than six. The specific rule is written clumsily but its intent seems clear as its application. The two umpires on the ground – Marais Erasmus and Kumar Dharmasena – missed it. But, that was not the only thing they missed on that day. Playing teams, despite the help or hindrance of technology, must include umpires as part of their team or as part of their opposing team, depending on the day.

Thank goodness for them that the team that faced most of their errors on 14 July at Lord’s was New Zealand and not India at Eden Gardens, Kolkata.

The most important rule of the day was something that no one had paid attention to, probably, including the players and the managements of the teams: if the match was tied, there would be a super over and if the super over was tied as well, the team that scored the most boundaries in the match would be declared victors. It is as daft as it could get.

It is not that we are criticising it now, after remaining silent when it was being drafted. The rule was not crowd-sourced and ICC did not invite suggestions from cricket fans, administrators, et al, to come up with a better rule.

Cricket is about runs and wickets. How you score them is less important. In theory, a team can take singles and twos and score 300 runs in a 50-over match. Possible. Another team can do it differently. Merely because another team scores the same number of runs with 30 boundaries and five sixes plus singles and twos, does not make it a superior team. Arguably, it is a riskier, less athletic and less efficient approach.

Since cricket is about runs and wickets, if the runs are tied, the next important thing is wickets. Since New Zealand scored the runs for the loss of eight wickets and England were all out, New Zealand should have been the winner.

If that too was inconclusive, then one can look at either of the two:

The only rationale for determining the outcome on the basis of the number of boundaries is that the team that provided the most entertainment to the crowd in terms of boundaries wins! Well, even that may not be correct for it takes no account of how the boundaries were scored.

It privileges batsmen over bowlers. It is flawed.

Why not the team with the most economical bowler wins?

The point here is not to come up with another unilateral (and unfair and unreasonable) rule but to indicate things that administrators needed to think through the signal that they are sending to cricket players.

The ICC has to be indifferent or neutral between batsmen and bowlers. Administrators in combination with television channels or because of revenues from television rights have put a premium on big-hitting batsmen.

The message of the (second) tie-breaker rule is that technique be damned, bowling be damned and fielding be damned.