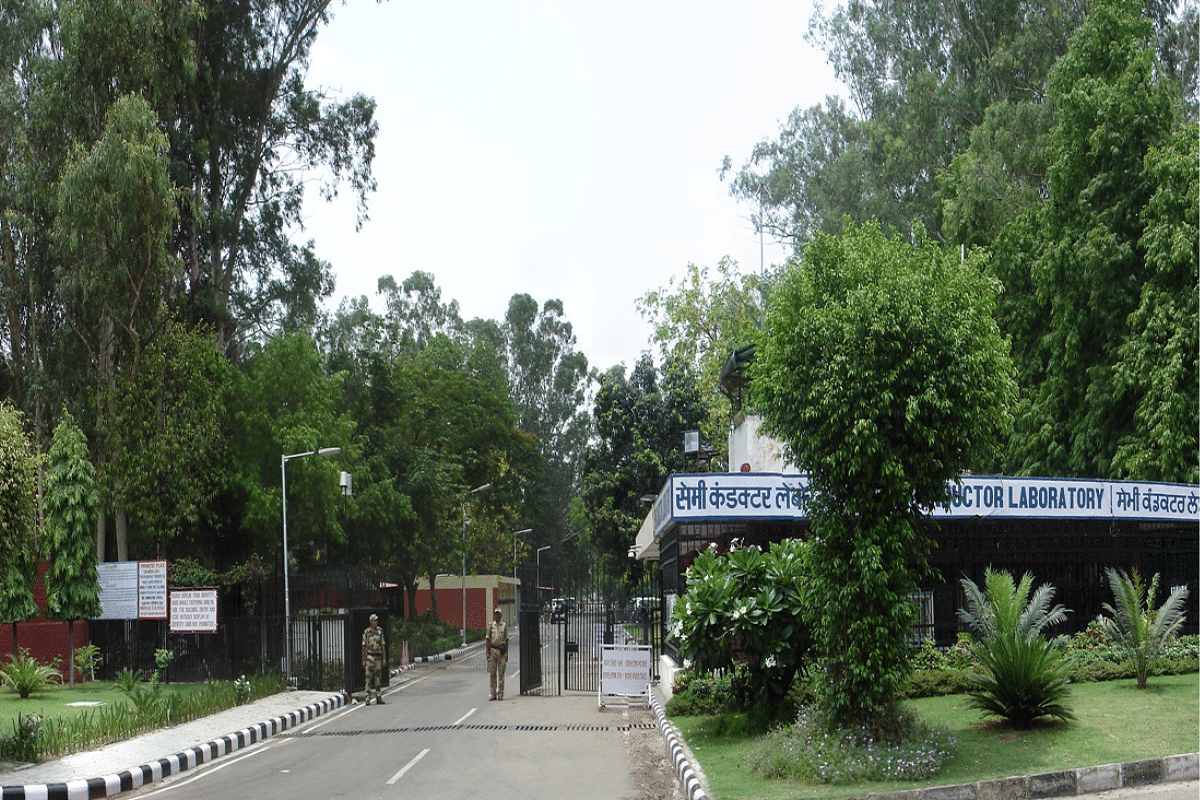 The main gate of the Semi-Conductor Laboratory (SCL)

The union cabinet approval in December 2021 of schemes to promote semiconductor and display manufacturing, with an initial overlay of Rs 76,000 crore, also had a mention of plans to modernise and commercialise the Semi-Conductor Laboratory (SCL) near Mohali, Punjab.

SCL is India's only semiconductor chip manufacturing facility with industry-grade equipment and production line and the capability to fabricate processed 200 millimetre (mm) silicon wafers using 180 nanometre (nm) process node at a rate of a few thousands per month.

Swarajya contributor Arun Mampazhy has argued earlier that, in theory, SCL may be able to process close to 4,000 wafers per month with tweaks to the existing production line. (The various commercial chips that could be fabricated at SCL, along with an estimate of the possible revenue it can bring in at "full capacity," was presented in another article.)

Even though the new commercial greenfield semiconductor fabs that India hopes to incentivise are of the latest wafer size (300 mm), more recent technology nodes (65 nm or smaller), and a higher capacity (minimum 40,000 wafers per month), the revival and commercialisation of SCL to its full potential is important, as explained here.

In January this year, the Ministry of Electronics and Information Technology (MeitY) had invited proposals for asset valuation of SCL, though the facility was believed to have been still owned by the Indian Space Research Organisation (ISRO) at that point.

In February, it was announced that SCL was handed over from ISRO to MeitY.

In June, MeitY invited applications for a new director (who is also the chief executive officer, or CEO) at SCL. The initial deadline to file an application was 9 August. However, it was later extended to 8 September.

It is not immediately known if the new director has been selected or if the process is still underway.

However, this RFP was cancelled on 11 August.

MeitY has now re-issued the RFP. As per the new notification, the proposal request is for the "selection of Agency to act as Adviser for Modernization/Commercialization of Semi-Conductor Laboratory, Mohali."

Though the notification talks about "exploration of the possibility" for an SCL joint venture with "a commercial fab partner(s) to modernize the brownfield fab facility," sources in the know say that MeitY may also consider reputed Indian business houses as a partner for commercialisation.

Comparing the June notification with the September one, many more details, and possibly better clarity, is available in some areas.

For example, Section 9.2, titled 'Technical Evaluation marks scheme', previously had four parameters. Now, it has seven and a detailed split of how marks will be awarded.

The new parameters include experience of the team deployed and the criteria for project director, project manager, as well as the two subject matter experts (SMEs), which is good; however, whether requirements like "global experience" will be easily met will have to be seen.

MEITY has not been able to identify and finalise globally experienced candidates for top roles, like the CEO, of India Semiconductor Mission (ISM) even after about eight months since an opening was announced in these positions.

However, in the case of this recent RFP, it is the responsibility of the applicant agency to hire such candidates.

It also appears that MeitY may not wait until the appointment of a globally experienced CEO of ISM in making yes-or-no decisions on the first-round proposals received for silicon fabs.

Rajeev Chandrasekhar, the Minister of State for Electronics and Information Technology, recently hinted that the proposals are under evaluation by the advisory committee to ISM.

Going by statements made in August by Minister Ashwini Vaishnaw, "we should be having the first groundbreaking ceremony for Indian semiconductor manufacturing units" before November-December this year. This is a clue that at least one of the current proposals may be approved by September or October.

Though Vaishnaw did not say whether he meant a chip packaging unit or a compound semiconductor fab, or indeed a silicon fab, the expectation and assumption will be that he was talking about approving one or more of the three proposals received in the first round for silicon fabs.

Also Read: SCL Fab In Mohali Is Too Important A Project To Be Headed By A 'Director On Deputation'