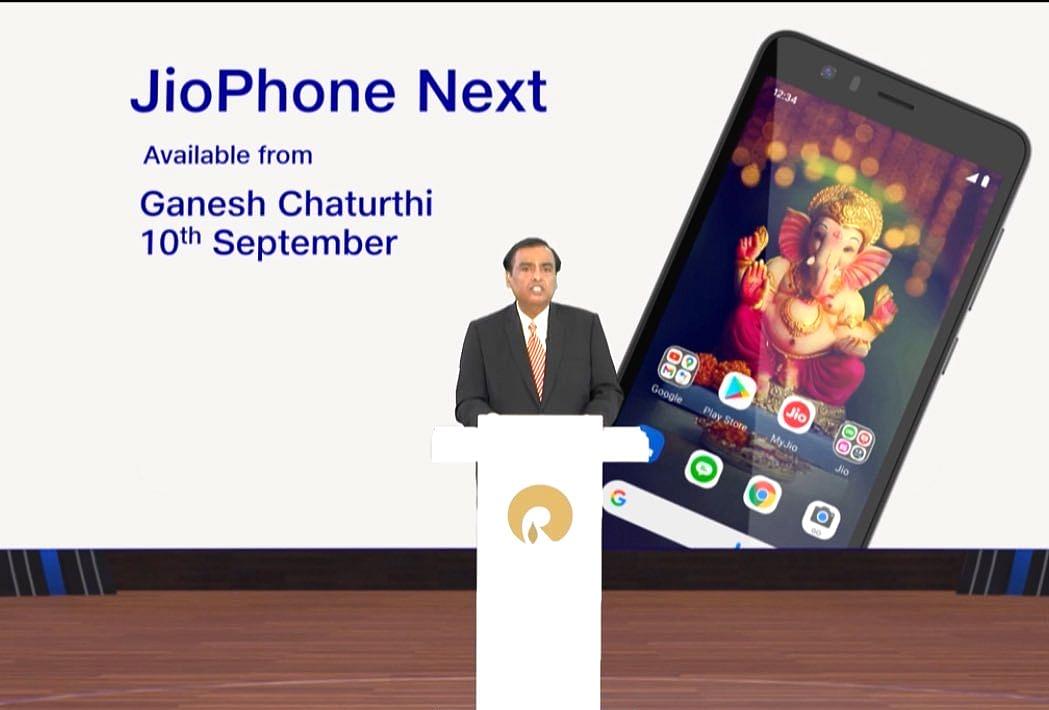 No, it was not a 5G handset as widely speculated. The media got that one wrong. Reliance stuck true to its tradition of unveiling a significant piece of gee-whiz Jio hardware at its annual general meeting (AGM) yesterday (24 June). But it resisted the temptation of jumping on the global 5G handset bandwagon.

With 5G connectivity in India at least 18 months away, it wisely reserved that piece of thunder for 2022 and instead addressed a more pressing need: a good 4G smartphone marrying premium features with a comforting desi 'feel' that the overwhelming majority of non-English-knowing Indian buyers are looking for. And at a price point, that canny buyers would rate as paisa vasool (value for money).

The 'JioPhone Next' that Mukesh Ambani announced is designed to deliver on all these fronts: Jio's canny tie-up with Google announced last year – will likely pay off. The two companies have collaborated in creating what they call an "extremely optimized version" of Google's Android Operating System, especially for JioPhone Next.

In his remarks, said Google CEO Sundar Pichai beamed into the AGM: "It is built for India and it will open up new possibilities for millions of new users who will experience the internet for the very first time".

Such users, especially those who make their home in Bharat rather than urban India, are handicapped by a lack of English knowledge. For them, the upcoming India-special avatar of Android will ease access to content in Indian languages with two new features built into the OS: Read Aloud and Translate Now. With a tap of a button, users can translate what's on their screen and—if they so choose—have it read back to them in their own language. These two features will work with any text on the screen like the web pages, apps, messages and even photos. And since the Jio "Next" phone comes with the smart Google Assistant, users challenged by not being able to write, can speak their commands and searches.

This is not the first time that Google has worked on a less power-hungry Android. It has already launched the Android (Go edition) OS, built for smartphones with less than 2 GB of RAM, running lighter and saving data. And it encouraged handset makers—mostly in India—to create Android One devices featuring a stock Android with no third-party embellishments.

Neither of these two initiatives has met with spectacular success because buyers have shown they don't like a stripped-down 'skinny' OS that limits functionality. We don't know the final contours of the Google-Jio co-developed Android, but hopefully, it will learn from the past and, in adding the promised India-specific features, will not subtract any of the standard Android functionality.

Also promised is an improved camera experience. "Google and Jio's teams have partnered closely to build an optimized experience within the phone's camera module resulting in great photos and videos: from clearer photos at night and in low-light situations to High Dynamic Range (HDR) mode that brings out wider colour and dynamic range in photos." All this, is fairly common jargon for camera phones and while none of these features is new to handsets, the makers are probably banking on the fact that "these are firsts for affordable phones in India".

Again, Google is a good bet as a partner for Jio to deliver on compelling camera-phone hardware. While many premium handset makers have partnered with lens leaders like Carl Zeiss to deliver a great clicker, Google's own Pixel range of smartphones are still widely rated to offer the best cameras in the business – and that too without succumbing to the trend of multiple lens sets in a camera. For its Jio foray, Google has also partnered with the messaging app, Snap and will integrate Indian-specific Snapchat lenses directly into the phone's camera so that the custom Snap effects can be integrated into, say, a selfie shot.

JioPhone Next is slated for availability from Ganesh Chaturthi day, 10 September. While a price has not been announced, Mukesh Ambani said: "It will be the most affordable smartphone not just in India, but globally". Consider as a reference: Jio's Lyf brand of smartphones, launched in 2016, currently covers a price gamut from Rs 3,000 to Rs 19,000. Somewhere midway in this band seems a sensible asking price for Jio's 'Next' step.

In not doing the expected and announcing a '5G' ready phone, Jio's game plan is discernible – and it is a pragmatic one. The logic seems to be: first use 5G internally; then roll out 5G -based services for select arenas; build in the experience, and then and only then, hit the consumer market with a simultaneous 5G service and a 5G handset.

There were pointers at the Reliance AGM that early acts in this scenario have already played out:

Reliance announced it is moving its core operations—Reliance Retail, JioMart, JioSaavn and JioHealth—to the Google Cloud. It will then use Google Cloud to power the fully automated lifecycle management of Jio's 5G network and services. Next, it will use these Jio 5G solutions to fuel the internal needs of key Reliance operations. Jio claimed that it has already tested its 5G networks at speeds up to 1 gigabit per second (GBPS) at its various data centres and the main research and development centre in Navi Mumbai. Reliance also announced having received regulatory approvals—and the required trial spectrum—to conduct field trials for a national 5G network.

To prove their 5G networks, Jio has launched a few test cases – like the experiment at the Sir H. N. Reliance Foundation Hospital, Mumbai, where they have developed a 5G-connected ambulance, with real-time telemedicine facilities and remote doctor access, making it a virtual extension of a hospital emergency room. Building on such experience, Mukesh Ambani says, "We are confident of being the first to launch full-fledged 5G services".

When will that be? The annual "Global Mobility Report" 2021 by Ericsson suggests that "5G will represent 330 million or around 26 percent of mobile subscriptions in India at the end of 2026".However, 5G services will likely debut in India earlier – around 2023 – starting with enterprises rather than lay consumers. This is, provided the leading telecom players obtain the necessary spectrum and see the commercial sense in making the costly switch.

Only Reliance knows Jio's timetable to roll out 5G in India for all. But business logic—and the launch of a new 4G phone this year—suggests that it will not be for 18 months at the least.