A Blueprint For E-Governance: This Karnataka IAS Officer’s Work Can Be A Model For States 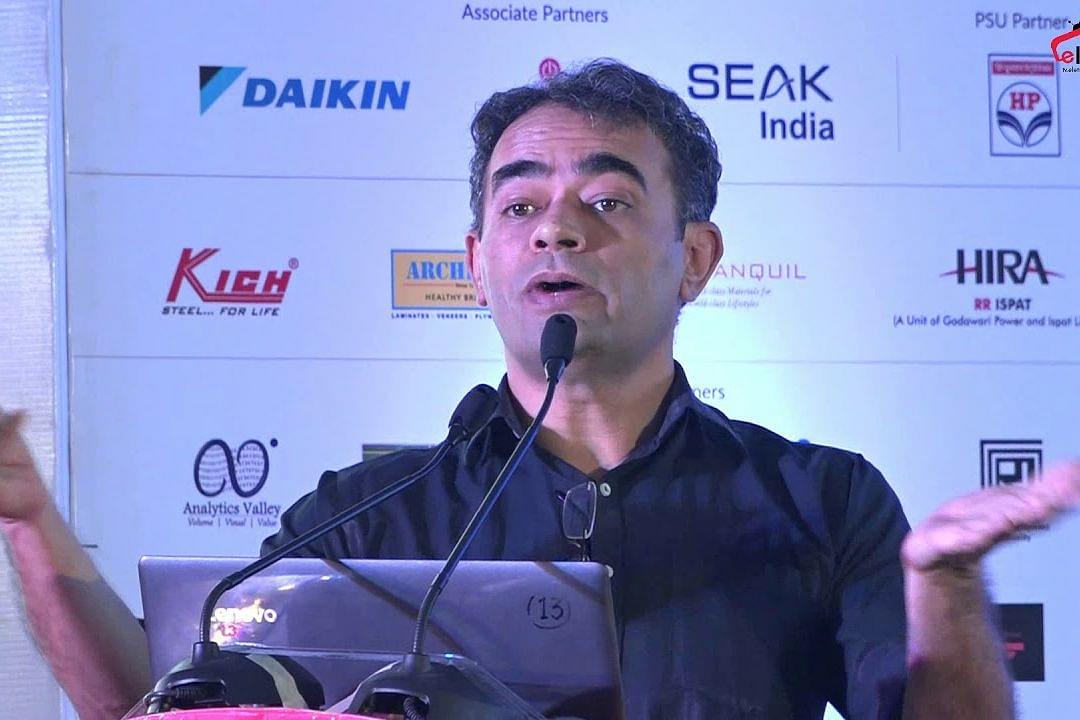 Moudgil is on a quest to empower citizens through technology.

Government’s work is God’s work — so goes a famous Indian administrative saying. But when was the last time you entered a government office and walked out with a sense of fulfillment? Few in a developing country will testify to experiencing such ‘Godliness’.

In the years after the country’s independence, it was not uncommon for the establishment to make the lives of the average person and the industrialist extremely difficult. The word “license Raj” — everyone has heard of it — was a profanity we would rather not remember.

But things changed after the paths of technology and governance crossed in the 1980s, at least in India. The latter half of the decade saw a significant rise in the number of government officials using computers, although pen- and file-pushing still remained the fulcrum of Indian administrative processes.

Thankfully, over three decades, we have seen greater infusion of technology in administration, making lives easier for citizens while making government work efficient, even if not Godly. It is in this backdrop that Karnataka, a pioneer in information technology and services, has made substantive strides in e-governance.

Under the innovative stewardship of Munish Moudgil, Commissioner, Survey, Settlement and Land Records, the state has taken several steps to make the delivery of citizen services hassle-free and seamless.

We had the chance to interview Mr Moudgil too; we touched upon a number of his achievements in the video (watch here). But here, we go into greater detail on a few notable reforms he has undertaken in government service.

A promise was made by the Karnataka government in 2018 to waive the loans of farmers, as farm distress was a major cause of concern.

While it was noticed that earlier, banks submitted loans to the government which were ineligible for such waivers, Team Moudgil proceeded to develop a comprehensive in-house software to weed out fake beneficiaries in a record time of two-and-a-half months.

Comprehensive data on crop loans was electronically obtained from CBS (Core Banking System) of 36 commercial banks (as many as 16.3 lakh loans were reportedly taken) as well as the cooperative sector (which lent 17.4 lakh loans).

Using this in-house software, every loan and farmer information was electronically authenticated using a combination of Aadhaar card, ration card, and land records.

As a result of such integrated authentication, only those loans that were validated in the software by about 13,000 branch managers/cooperative society secretaries and in the back-end by government auditors were waived and the proceeds directly credited to the accounts of eligible farmers through the National Payments Corporation of India (NPCI), virtually eliminating the middleman menace.

Initially, commercial banks, according to data available with Swarajya, had submitted a list of about 22 lakh loanees, with a total outstanding of about Rs 36,000 crore.

But upon application of rigorous authentication processes, it was found that only 16.3 lakh loans were genuine. Hence, the total outstanding loan amount had come down from Rs 36,000 crore to Rs 27,000 crore, a drop of Rs 9,000 crore.

On further inspection by the authorities, it was found that several farmers were claiming waiver benefit on both commercial bank and cooperative bank loans (which was disallowed), which, after further sanitisation, reduced the raw bill of the government to about Rs 13,500 crore.

In an additional measure, all crop loan waiver certificates were issued online through digital signature. This, reportedly, helped prevent wastage of agricultural man-hours by way of unnecessary farmer visits to government and bank offices.

Through this digitisation process, the Karnataka government, according to Moudgil, has saved thousands of crores of rupees — just by integrating Aadhaar and ration cards, and land record details.

Incidentally, all reports and information on the scheme and its processes can be accessed here.

This reform was instituted to help the average person procure instantaneous over-the-counter online certifications relating to caste, income, and residence.

As part of the scheme, the digitised caste, income, and residence details of around 6.1 crore people who reside in Karnataka have been pre-created using house-to-house enquiry by village accountants of the Revenue Department and kept ready in the database for immediate issuance upon application.

This step is said to have virtually eliminated the need to run after difficult government officials for something that is essentially one’s fundamental right.

Another notable feature of this measure is that one can print such certificates (which are digitally signed) from the comfort of one’s home or a cyber café, without having to experience the displeasure of waiting in long queues in state offices.

However, for those who think they can fake such certificates, here’s a bit of news: the government has an inbuilt code or algorithm for detection of fakes. By simply running their eyes through a certificate, the revenue official, says Moudgil, will know whether it is printed using legitimate or fake means.

The project is alive and kicking in rural Karnataka, while one crore people remain to be covered in urban areas.

These services can be accessed here.

Dishaank – Whose Property Is This Anyway?

One phrase that is repeated often when buying property is “caveat emptor”. The phrase, translated as ‘buyer beware’, is wisdom distilled from scores of property buyers, many of whom have burnt their fingers in the process.

This mobile app (available on Google Play) was created by digitising and geo-referencing all revenue survey maps. The app boasts of over five lakh downloads and can help a property buyer ascertain land location, boundary, and ownership through real-time global positioning system (GPS) in his or her mobile — just like Google Maps. All one needs to do is to stand on a particular land parcel and open the app.

The coordinates of the land on which you stand is automatically detected and ownership is displayed on screen. Not just that, you can ascertain the survey number of the land, village, hobli, taluk, and district names, apart from ownership details, nature of land, court stay orders, and restrictions, if any imposed by the government, among other details.

This facility, operated by the Karnataka State Remote Sensing Application Centre, is touted to be the first-of-its-kind in the country. The 1965 map of the state has been taken as the pivotal point of reference, while updates are an ongoing process.

Moudgil has created a dashboard wherein the team can monitor how promptly the citizen services are getting delivered and monitor delays and the output of staff.

The dashboard monitors the efficiency of the Citizens Services Delivery System in real time, and the performance of every office and officer is scored. The information is online and in the public domain. A glimpse of the dashboard is as under and website link is here:

UPOR Project – Where Government Is Guarantor

Ever walked out of a sub-registrar’s office after purchasing or registering property and felt a sense of achievement, ownership, or security?

Fact is, just because you’ve registered your property with the government does not apparently guarantee ownership.

The aim of registration is merely to create and keep an official record of the particular document which was signed by the parties involved and does not vouch for the authenticity of the contents of the document.

A famous example quoted is that two people can enter into a transaction to sell the Vidhana Soudha to one another, and nothing bars the registrar from recording that transaction. But whether it is legitimate is anybody’s guess.

It is in this context that the UPOR (Urban Property Ownership Record) card, which has the sanction of law under the Land Revenue Act, is of relevance. The card is envisaged as a statutory guarantee of the legitimacy of your property and the legitimacy of your ownership of the property, unlike the sale deed, which is but a public record of property transacted, and the municipal khata (patta in some states), which is merely an acknowledgment of municipal taxes paid on that particular property.

The UPOR project, which uses to-the-scale geo-referencing to map immovable properties, and will document comprehensive details such as mortgages, liens, and other encumbrances is active in Shivamogga and Mangaluru.

The project will also importantly map lands that belong to private parties as well as those that belong to the government, such as forest lands, rajakaluves and so on. Once the UPOR card comes into effect, there will be no scope for fraudulent sale or development of layouts.

Incidentally, survey work for one lakh properties has been completed in Shivamogga town and about 1.5 lakh in Mangaluru city, and over 10,000 registrations using the UPOR card have been carried out thus far.

The project is, thus, successfully going on in Shivamogga and Mangaluru cities.

The next roll-out is scheduled for Mysuru in October 2019. In Bengaluru, the drone-based survey work is going on and will be completed in a year’s time and the project will be rolled out thereupon.

Under this initiative, RTCs (land records) without the name of the owner are computerised and maintained in the registers. This is to prevent creation of fake RTCs and allotment of fraud survey numbers out of thin air.

Here, maps and sketches are also digitised to weed out fake properties. There are as many as 35 lakh fake or irregular RTCs that have been created over time. These do not have corresponding maps or sketches, and have been created by corrupt revenue officials along with unscrupulous agents and even innocent citizens. Also called Pyki RTCs, these lands cannot be sold, mortgaged with a bank, or even converted for other uses.

A pilot project has been launched by the Karnataka government to map and re-survey lands using drones, as human intervention is largely prone to error. The project is under way in Tumakuru, Hassan, Ramanagara, Uttara Kannada, and Belagavi. Surveying work for both residential and agricultural properties is being done in partnership with the Survey of India.

As part of this project, all aspects of land such as divisions, nature of land, dimensions and so on will be recorded and digitised. This will not only help in better land management but also help reduce disputes.

The drone project, which has state cabinet approval, has been given an outlay of Rs 125 crore.

With Prime Minister Narendra Modi calling for a digital revolution employing maxims such as ‘Minimum Government, Maximum Governance’, and reformist missions such as Digital India, UIDAI, BHIM for digital banking, Cyber Swachhta Kendra, eNAM, and Direct Benefit Transfer (DBT), the state of Karnataka – especially the office of revenue situated at the edge of Cubbon Park – appears suitably poised to serve as a role model for other states in their efforts to embrace e-governance.