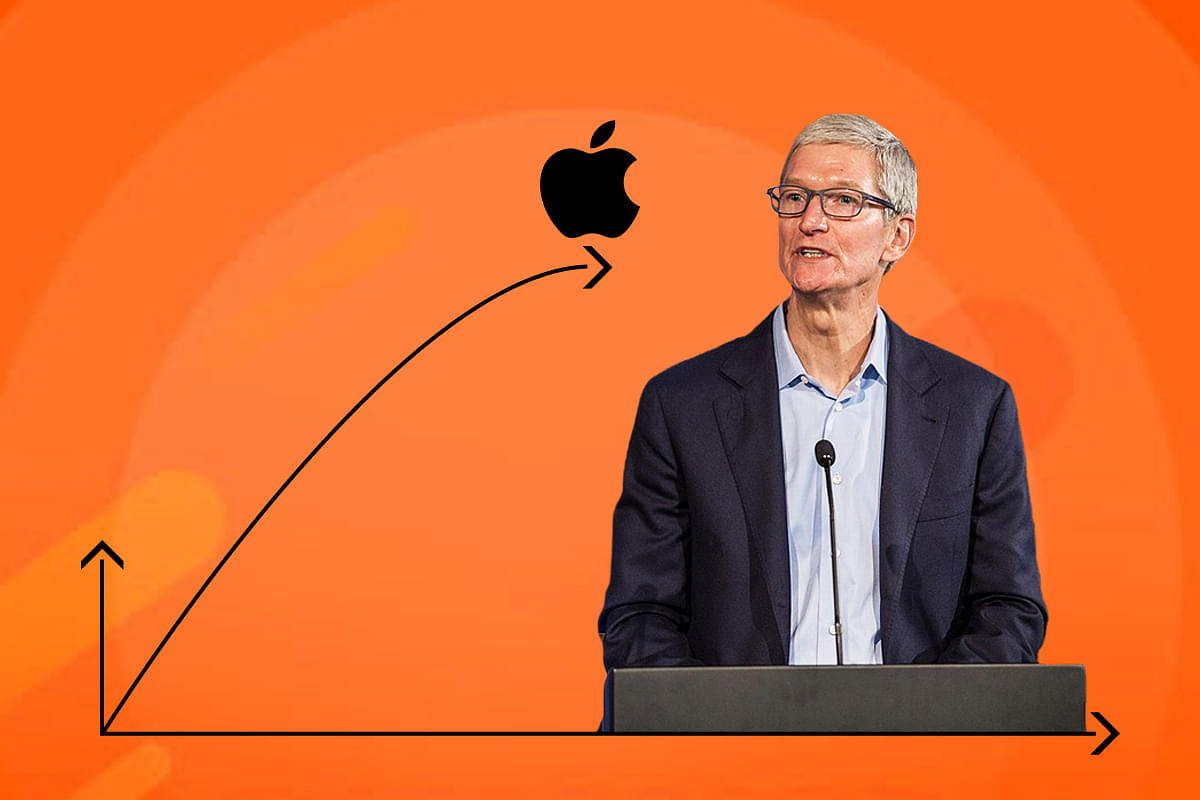 Apple CEO Tim Cook recently celebrated 10 years at its helm. It is the most valuable company in history, at about $2.5 trillion — an unimaginably stratospheric number — and Cook has steered it to its massive valuation. That is a surprise to many who thought Cook, basically an operations man, would never be able to fill the shoes of the flamboyant and dashing Steve Jobs.

Cook has indeed done a remarkable job of steering Apple. But what next? The last real innovation Apple produced is the iPhone, and that was a while ago: 2007, to be precise. It is still a huge money-spinner, but where exactly has Apple innovated since then, except in minor, supporting products like the Apple Watch and the Apple Airpods?

There is an interesting claim by management theorist Simon Sinek that what distinguishes Apple is the ‘why?’ question. Why does Apple exist? Well, in Steve Jobs’ terminology, it was to make “insanely great products”. As Sinek would say, “Want to buy one?”

Jobs saw a lot of wonderful new technologies at Xerox PARC and intuitively understood how these were transformative, and so he adapted them. In stark contrast, other technology companies have mundane goals: profit margins, market penetration, etc.

But that differentiation — design excellence — may well have walked out the door with the exits of Steve Jobs and Jonathan Ive, the chief designer. And brilliant design doesn’t always succeed, unless you are able to respond to the unarticulated needs of the people who will buy the products (which is the gospel of the discipline of ‘design thinking’, which, confusingly, is not about design per se but about solving problems the way a designer would).

Apple did have its share of fiascos: for instance the hand-held computer (personal digital assistant) named the Newton. Its demise almost brought the company down, and led to the exit of Jobs.

On the other hand, the original Macintosh was a thing of beauty, and it was vastly superior to the competition. But my question remains, where is the innovation today? I hear there’s an Apple Car coming, or Apple Glasses, but they are not really “wow!”. Apple always shows up at the top of the list of innovative companies, but that is mostly resting on its laurels.

I must make a disclaimer: I have a love-hate relationship with Apple. The very first computer that I personally owned was a Macintosh Plus that I bought for a princely sum even though I got a university student discount. It was the obvious choice at the time: along with a dot-matrix printer it enabled me to produce presentable reports, graphs and term papers. The alternative on offer was DOS-based PCs, which, although they had Lotus 1-2-3, were distinctly user-unfriendly and far less appealing.

That Mac lasted me a long time: robust, rugged and reliable, in an all-in-one, portable chassis. Later, while working in Silicon Valley, I bought my second Mac, a Macintosh 2. This was a more conventional device with a separate monitor and CPU box. I bought it at a sale when the company Go went under: it was developing an OS for handheld devices, but it ran out of runway. To be honest, I didn’t like that Mac as much as the earlier one.

But the real surprise came when I decided I needed a laptop a few years later. I found out that Windows-based laptops had come a long way, and I could buy one for roughly $1,000, which was significantly less than Apple’s laptops were going for. So I bought a Toshiba; I have never bought an Apple laptop, although I had one from work a few years ago.

It was nice, but for an office worker, and not a media creator, it was not more appealing than a Windows laptop. These days, I am happy with my Chromebook, using a Windows machine only to run specialised applications, or some like Audacity that don’t run on the Chromebook.

That sticker shock was the turning point for me. Maybe I was wrong in turning down a better put-together product than the average Windows laptop, but I was not willing to pay a premium for a consumer item.

I may have been wrong, because my average Windows laptop has had a lifetime of only three-four years while the Macs, I hear, do not get obsolescent so quickly. I hear this about iPhones versus Android phones too.

I didn’t realise it then, but the issue I was up against was Apple’s business model of detailed control over everything. That makes the Apple ecosystem both attractive and forbidding. On the one hand, if you are willing to cede control to Apple, then you have a smooth and pleasant experience.

This is what has created legions of Apple ‘fanboyz’, who are totally happy with the walled garden, and have no wish to exit. Oddly enough, Apple has become the Big Brother (albeit more benign) that it lampooned in the famous 1984 ad.

There is a nice contrast between Apple’s highly integrated model (which incidentally ensures fat margins) and the Wintel model. I would certainly not call Wintel an ‘open’ system, because it was zealously controlled by Microsoft and Intel, but it was (is?) a disintegrated model, because although the principals held the IP tightly and extracted monopoly rents, there were opportunities for third parties to exist, and even thrive, where the two were not present. And they were not ubiquitous, unlike Apple in its own stack.

Which is a better model? There is no straight answer. Today Apple’s model is incredibly successful.

Earlier, the Wintel model was incredibly successful too. One of the concerns about Apple going forward is that it may have reached the end of this business model. They are trying to reinvent themselves as a services plus product firm, but we will have to wait and see.

There are several other issues. The first is, simply, size. It’s hard to sell more iPhones than there are people in a country, I suppose, even if they can afford them and want them. So Apple as a matter of basic economics will slow down, and its juicy profit margins will erode. In fact, I am rather amazed that there aren’t passable Chinese clones of Apple products. Maybe it’s the deterrent effect of Apple’s fearsome lawyers.

Or maybe it is the symbiotic relationship between Apple and China. There is the famous story (it may be apocryphal) that the iPhone originally had a plastic screen, but Jobs found it scratched up easily, so at a late stage he insisted on a glass screen. The story goes that the only place where they could quickly ramp up and find enough people to cut and process the glass was in the factories of Apple’s Chinese partners.

So the supply chain relationship between Apple and Chinese OEM’s has been good for both.

I’m not sure if this will be feasible going forward, as there is a general intent on the part of the US to decouple from China (although this is opposed by both Big Tech and Wall Street). So this happy state of affairs in supply chain management is under threat, which may either increase Apple’s costs, or end up in Chinese erecting barriers to market access, or both.

There are some clues in China’s recent clampdown on its own ‘high-tech’ companies like Alibaba, Didi Chuxing, etc, that China views these mostly e-commerce entities with disdain, preferring to direct investment towards the harder technologies such as, perhaps, quantum computing, biotechnology, energy, etc. They may well be right. Apple has more tangible products than Microsoft, Alphabet, Facebook, et al; still, when they all announced record earnings in July, investors were a little sceptical about future prospects.

My feeling is that these Big Tech firms are sort of moving the deck chairs around on the Titanic. Their core businesses are plateauing, and they will have to enter into each others’ areas to sustain their growth; thus Apple is rumoured to be building its own search engine (though it gets some $10 billion from Google to be the search engine of choice on iPhones) and even an advertising platform.

But the problem is that they are all following a model of advertising-led revenue (although Apple protests that they do not sell, or have to sell, their users’ data, I suspect they will not let go of user data that easily) or what is known as ‘surveillance capitalism’. This is already raising hackles among consumers as well as regulators concerned about monopolies, which these Big Tech firms do have in their niches.

There is an increasing trend towards anonymity or even pseudonymity, and I suspect a business model will emerge where users keep their data to themselves, or demand payment for it. That may put a major crimp in their businesses, that is, if the regulators don’t get to them first. There have been record fines imposed by the European Union, Russia, etc on these Big Tech companies, and the US competition authorities may weigh in as well.

Whatever goes up will come down. We just don’t know when that will happen. It is certain that Apple will fade, as other champions have, for instance IBM or Toshiba. The question is when.

My belief is that the best days are behind Apple, but I have been wrong before, so don’t count them out. The structural and environmental changes we see now argue that Apple is past its best days.