After Staving Off Threats To His Posts, Nepal PM Oli Jettisons Jingoism To Mend Fences With India 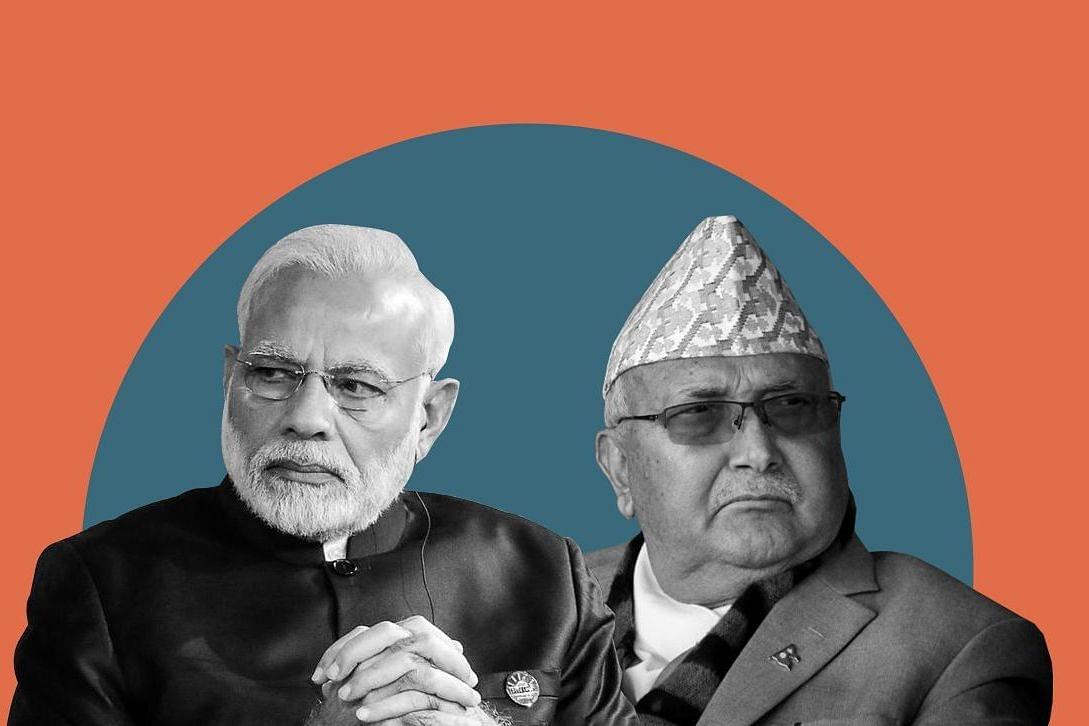 The grave crisis in Nepal’s ruling Nepal Communist Party (NCP) which appeared to be headed for a split even until last weekend seems to be blowing over, at least for now.

With Prime Minister Khadga Prasad Sharma Oli staving off threats to his twin posts — the premiership of the country and co-chair of his party — he now finds it convenient to forsake his jingoism and repair the ties with India that he damaged.

Oli called up Prime Minister Narendra Modi on 15 August to convey his wishes on India's Independence Day. That the call was a last-minute decision was evident from the fact that the Nepal PM’s office conveyed to India’s Ministry of External Affairs only on Friday afternoon that Oli would like to speak to Modi the next day.

Senior leaders of the NCP told Swarajya from Kathmandu that Oli had been counselled by many to break the ice with Modi.

“The PM (Oli) was told that Nepal will be the loser if ties with India deteriorate and it will be in Nepal’s interests to repair the ties now,” said a senior NCP leader, who had served as the country’s foreign minister.

Deep Upadhyay, Nepal’s former ambassador to India, said that Oli’s call to Modi was a “good gesture, albeit one that should have happened long ago”.

He also said it was noteworthy that Modi, during the 15-minute call, underlined the deep cultural and civilisational ties between the two countries.

A member of the NCP’s foreign affairs department, Milan Tuladhar, said Oli’s initiative to break the ice was long overdue. Tuladhar, who served as foreign policy adviser to Jhala Nath Khanal during the latter’s tenure as PM, said that Nepal cannot afford a protracted standoff with India and Oli was well-advised to end the stalemate.

But political analysts say Oli has heeded the counsel of his foreign policy advisers only because it suits him now.

“He (Oli) played the nationalist card to thwart the serious challenge to his posts and defeat his challengers within the party,” said a member of the NCP’s secretariat.

Oli, admit even his detractors within the party, played his political cards well. Even though a majority of the members of the party’s secretariat as well as the standing committee were ranged against him and wanted him to give up at least one of the two posts he holds, he ultimately out-manoeuvred them with his jingoism.

“Oli played the jingoistic card very well and even his staunchest critics in the NCP were hesitant to call his dare out of fear of being labelled as anti-nationalist. Oli, in public perception, had come to personify nationalism and anyone opposing him risked being termed anti-national,” said the secretariat member.

Faced with demands for stepping down, Oli dug in his heels and suggested that all those demanding his removal were dancing to India’s tune since he had taken on India. He publicly accused India of hatching plots to oust him.

Oli also held out the threat of splitting the party if pushed to the wall. That also dampened his opponents’ zeal since no leader wanted to be held responsible or be perceived as responsible for splitting the NCP.

China’s role in supporting Oli through the crisis was also a major factor. And it was reportedly at Beijing’s bidding that Oli targeted India.

Oli’s objective in playing the anti-India card was three-fold: to divert public attention from his many failings and misgovernance, to gain political advantage over his detractors and to please his benefactors in Beijing.

Now that those objectives have been served, Oli has found it convenient to listen to sane counsel and attempt to reset ties with India. It is learnt that Oli has endorsed his Foreign Minister Pradeep Kumar Gyawali’s initiatives to normalise relations with New Delhi.

Gyawali has, all along, been advising restraint and had even obliquely criticised Oli for his overly aggressive stance against India. Gyawali had opposed Oli’s cultural jingoism in claiming that Bhagwan Ram was born in Nepal.

Oli even ordered the renaming of Madi in the Terai region of Nepal to ‘Ayodhyapuri’ in a bid to establish that the “real Ayodhya lies in Nepal”.

However, a subtle climbdown from that position was witnessed at a high-level bilateral meeting between the two countries on Monday (17 August). The meeting, co-chaired by India’s ambassador to Nepal Vinay Mohan Kwatra and Nepal’s foreign secretary Shanker Das Bairagi, was held to review the progress of India-funded projects in Nepal.

Monday’s meeting was the first official-level interaction between the two countries in over five months. At the meeting, both sides decided to expedite work on developing the ‘Ramayana circuit’ that includes Nepal’s Janakpur (Devi Sita’s birthplace) and many places in India associated with Bhagwan Ram, including Ayodhya.

“Agreeing to resume work on the ‘Ramayana circuit’ is in itself an acknowledgement by Nepal that Bhagwan Ram was born in Ayodhya that is in India, and many other places associated with Shree Ram are in India,” said a former Indian ambassador to Nepal.

Just before Monday’s bilateral meeting in Kathmandu, Nepal’s ambassador to India, Nilamber Acharya, said that Ram and Buddha unite us. That was also a very significant statement coming from Nepal’s envoy soon after his Prime Minister made those fantastical claims about Ayodhya.

Oli has, over the past few days, met a number of foreign policy experts, including Nepal’s former envoys to India and that country’s ex-foreign ministers to chalk out a strategy to mollify India.

“Oli wanted (Nepal’s) diplomats and others to take the responsibility of mending ties with India. But most of us told him that he would have to take the first step even if it was a symbolic one. Thankfully, India’s Independence Day came as a good opportunity for Oli,” said a former foreign secretary of Nepal who did not want to be named.

Oli has also been told that the process of getting ties back to normal would be a long and laborious one and that he should allow his officials to engage in the process unencumbered. Oli has also been advised by all those he met over the past few days to desist from making any provocative statements that could further rile New Delhi.

Oli has been facing a lot of pressure to normalise ties with India from Nepal’s foreign policy and political establishments, civil society and even from within his party.

Oli had calculated that he would be able to provoke New Delhi through his offensive acts into taking some retaliatory measures against Nepal. That would have allowed him to justify his anti-India steps and statements and steer Nepal further into China’s embrace.

But New Delhi wisely avoided that trap. As a result, domestic pressure mounted on Oli to abandon his anti-India course and repair the rupture in ties that he caused.

It is learnt that Oli wants India to agree to foreign secretary level talks to resolve the boundary dispute between the two countries. Nepal has requested for these talks a few times, but New Delhi has asked Kathmandu to wait till the pandemic is over.

Nepal does not want to wait, and Oli has reportedly said that only when New Delhi agrees to hold talks over the boundary dispute can Indo-Nepalese relations get back to normal.

Highly-placed sources in India’s Ministry of External Affairs (MEA) said there is not much possibility of these (boundary) talks being held now. The game plan is to make Oli wait and sweat it out, while simultaneously making progress on other fronts.

“The issue of border talks has been delinked from other areas of cooperation. Nepal’s people and politicians are seeing how India is cooperating with Nepal in areas of trade, development and other fields and has not allowed the bilateral ties to be held hostage by the border dispute. That has put Oli under a lot of pressure to abandon his India-baiting,” said a senior MEA official, who had served in the Indian mission in Kathmandu.

But there is no saying when Oli will get back to baiting India. Given the fact that the crisis within the NCP has not been fully resolved and can erupt once again, it may be only a matter of time before Oli reloads his jingoistic gun.

New Delhi is fully aware of that possibility and, hence, has adopted a ‘wait and watch’ stance towards Nepal.