Anodyne For Troubled Conscience: Reflections On The Anniversary Of Nagasaki Bombing 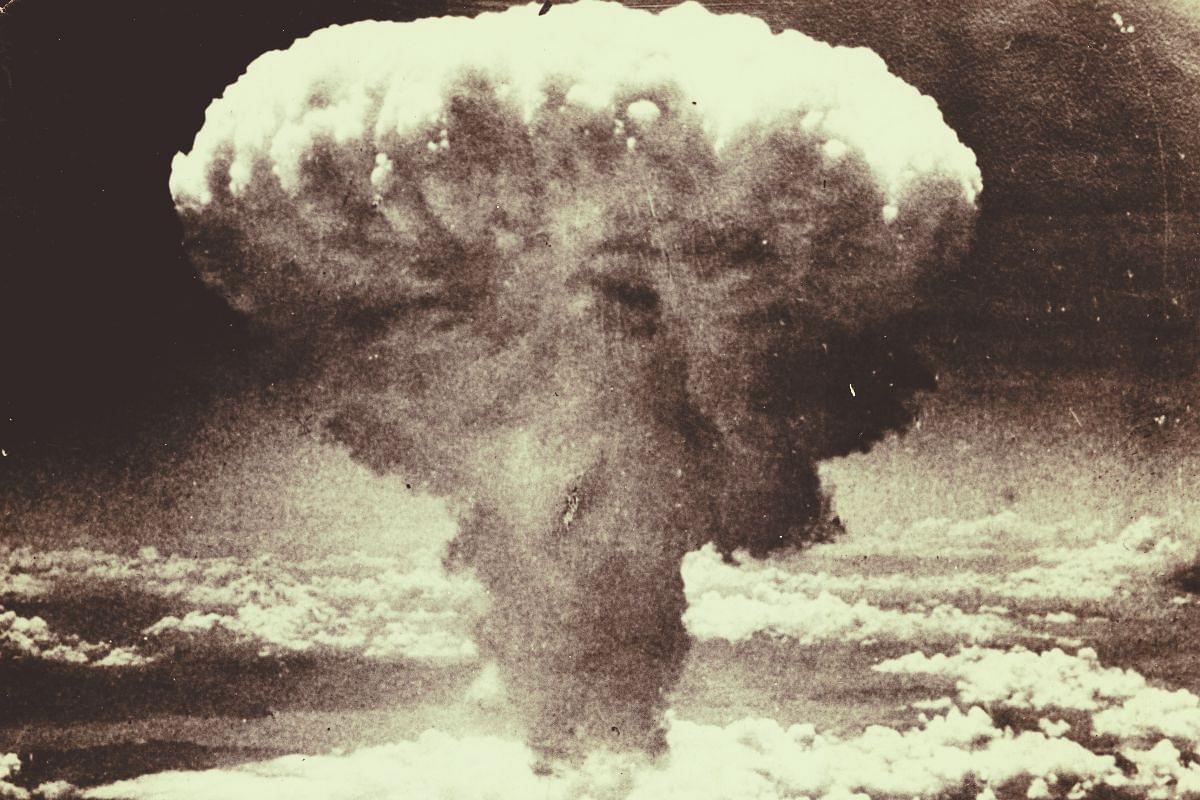 Reflections on the Nagasaki Bombing. (Wikipedia)

Today is the day to remembering the innocent victims of atom bomb and the moral dilemma of its creators; some of whom used philosophy of Bhagwat Gita as an anodyne for the pangs of troubled conscience.

As we mourn the loss of innocent lives, victims of leadership lapses, we also remember the dilemma of all those who have an unpleasant duty to perform.

US airmen dropped the nuclear bombs ‘Little Boy’ and ‘Fat Man’ on Hiroshima and Nagasaki, bringing the Japan on its knees and gory end to World War II. Mushroom clouds rose over the cities of Hiroshima (6 August 1945) and Nagasaki (9 August 1945) from the atomic explosions.

The soldiers probably did not know what destruction they were about to unleash or were convinced that they were merely doing their ‘duty’ and that it was their duty as soldier on the right side in a just war. Few dispute that Germany, Italy and Japanese governments had massive popular support at home and their soldiers also fought the war as their considered ‘duty’.

It is any Commander’s nightmare if his subordinate forces start having pangs of conscience whether what they were doing was right. Same applies to all those who work to create and maintain the War Machinery and develop newer weapons, including weapons of mass destruction, indiscriminately killing enemy soldiers and ‘innocent’ civilians alike.

Armies and those who equip them have an unpleasant duty to perform.

Physicist J Robert Oppenheimer was one of the key scientists involved in the ‘Manhattan Project’ to develop ‘atom bomb’ started by the US Army in June 1942.

He was convinced of being on the right side in the war and yielded to those he recognised as his political and military superiors. In fact, he took solace from the philosophy of Gita, yes 'Shrimad Bhagwat Gita’ as an anodyne for the pangs of conscience.

He was a scientist, so it was his duty to make judgments on scientiﬁc matters, like how to build the bomb. But when it came to politics and war, he refused to oppose decisions made by people seemingly more qualiﬁed than himself. He would not venture outside his dharma.

As a young professor of Physics his interests ranged far beyond his academic specialty. He studied Sanskrit with Professor Arthur W. Ryder at Berkeley. He proclaimed Gita the “the most beautiful philosophical song existing in any known tongue.”

He would often give translated copies of Gita as gifts to friends. He listed the book among top ten books that “did most to shape his vocational attitude and philosophy of life along with Shakespeare’s Hamlet and Eliot’s Waste Land etc.

Oppenheimer knew that the Manhattan Project would release the dangerous genie of nuclear weaponry, yet he believed that scientists had an obligation to serve on the project.

Scientists should shun the ivory tower and act selﬂessly but effectively in the world. He could not throw away all his talent and training. His duty was deﬁned by his place in society and the profession of his choice. He was not a statesman or a soldier but a scientist.

Over the course of eighteen chapters of Gita, Krishna instructs Arjuna on why he should take part in the war. Krishna’s arguments include three basic ones that Oppenheimer would take to heart:

(2) Krishna, not Arjuna, will determine who lives and who dies, and Arjuna should neither mourn nor rejoice over what fate has in store but should be sublimely unattached to such results;

(3) Ultimately, the most important thing is devotion to Krishna—faith will save Arjuna’s soul. As Arjuna begins to see the light, he asks to view Krishna in his godlike form. Krishna obliges by granting him “celestial sight”.

Krishna tells Arjuna why he is there: “I am Death (KAAL), and my present task is Destruction."

Arjuna realises his error, ends his hesitation, and begins his battle.

During the testing of the first atom bomb at Alamogordo, New Mexico, Oppenheimer was the only one who kept his eyes open and was blinded for a day. He was familiar with Sanskrit which he had learnt during his University days.

When the mushroom cloud from the underground test rose up, he was heard reciting from the Gita: "If the radiance of a thousand suns, were to burst into the sky, that would be like the splendor of the Mighty One”

Oppenheimer’s belief that scientists should shun the ivory tower and act selﬂessly but effectively in the world stems from this philosophy involving duty, fate, and faith.

He believed that he had a job to do; that he should do it only because it was his job and not because he was intent on obtaining any particular result; and that following these principles would bring a saving measure of serenity into his profoundly discontented existence.

Oppenheimer believed that his duty was deﬁned by his place in society, his profession, training, and expertise. He was not a statesman or a soldier but a scientist, a Nuclear Physicist. This would determine what he must do and what he must not.

One of his students had misgivings about creating a terrible weapon like the atomic bomb and preferred joining the army as a common soldier instead of serving on the Manhattan Project, Oppenheimer gave him “a good talking to” for “throwing right away” all his talent and training. If he could make up his mind “to use himself as a scientist and nothing else, he should do so".

There is also a fourth basic argument in the Gita: death is an illusion because even though the body perishes, the soul is eternal.

Oppenheimer did not seem to believe this. He never maintained that the death of people in Hiroshima and Nagasaki was unreal. His apparent disbelief in a soul whose immortality made the death of the body seem unimportant, however, made his version of Hinduism a little less psychologically tenable, less practicable, than that of the Gita.

It was comparatively easy for Arjuna to be indifferent to the consequences of his bow and arrows, because he believed that the souls of his opponents lived on, no matter what happened to their bodies. It was harder for Oppenheimer to shrug off the consequences of his atomic bomb, however, because he had no such conﬁdence that the destruction of Japan was an illusion.

He would handle this problem by concentrating his attention on his duty to act and, insofar as possible, not on the results of his action.

Likewise, a deep sense of duty to the nation must have resolved all the dilemmas of our beloved former President Dr A P J Abdul Kalam aka ‘Missile Man’ to conclude that he was on the right course to develop latest missile technology.

Since World War II, USA and Japan have put their troubled past aside. New political alignments now prevail in international relations.

Japan is an amazing country, progressing to commanding heights of technological progress through sheer hard work, setting aside its troubled past. Its transition to an advanced industrial economy known for quality and perfection feeds so many case studies in business schools.

During my work in the Finance Ministry, I had to deal with the turbulence caused by nuclear sanctions imposed on us after 1998, including from Japan, affecting key national projects. Since then, we have steadily come out of isolation.

Newer threats to international peace and security are emerging as traditional warfare gives way to asymmetric warfare, overt war to covert war. Nation States are faced with the dilemma of respecting basic human rights in such wars with such enemies.

How do you apply rules of war against non-state actors who obey no rules? How do you deal with people who would like to impose their beliefs on others because they believe they alone are right to the exclusion of others? How far can we stick to our ‘dharma’ at the cost of being defeated?

Is ‘dharma’ absolute at all places, at all times for all people? The state would like to avoid violent crackdown and collateral damage, extreme retributive justice and to keep juveniles away from normal courts. If the enemy sends children below 18 to infiltrate our territory and spread terror, do they deserve the protection of law or treated as enemy combatants?

Mankind has unsuccessfully tried to evolve a universal moral compass about conflict management and rules of war.

Ultimately, it is the judgment call based on prevailing realities. Even Lord Krishna did not ask for total obedience to whatever he said but finally asked Arjuna to decide for himself. We believe we have the FREE WILL to decide and act and face the consequences.

This is particularly so when eternal seekers of truth - the unknown and unknowable - have to contend with those convinced of having already discovered the truth.

Quite often, we get drawn into wars and conflicts of various hues that are not of our choosing, that are imposed on us. We pray and work for peace but do our duty as soldiers if need be. That is the enduring lesson for us.