Awesome Without Allah: Why These Muslims Are Leaving Islam And Are Proud Of It 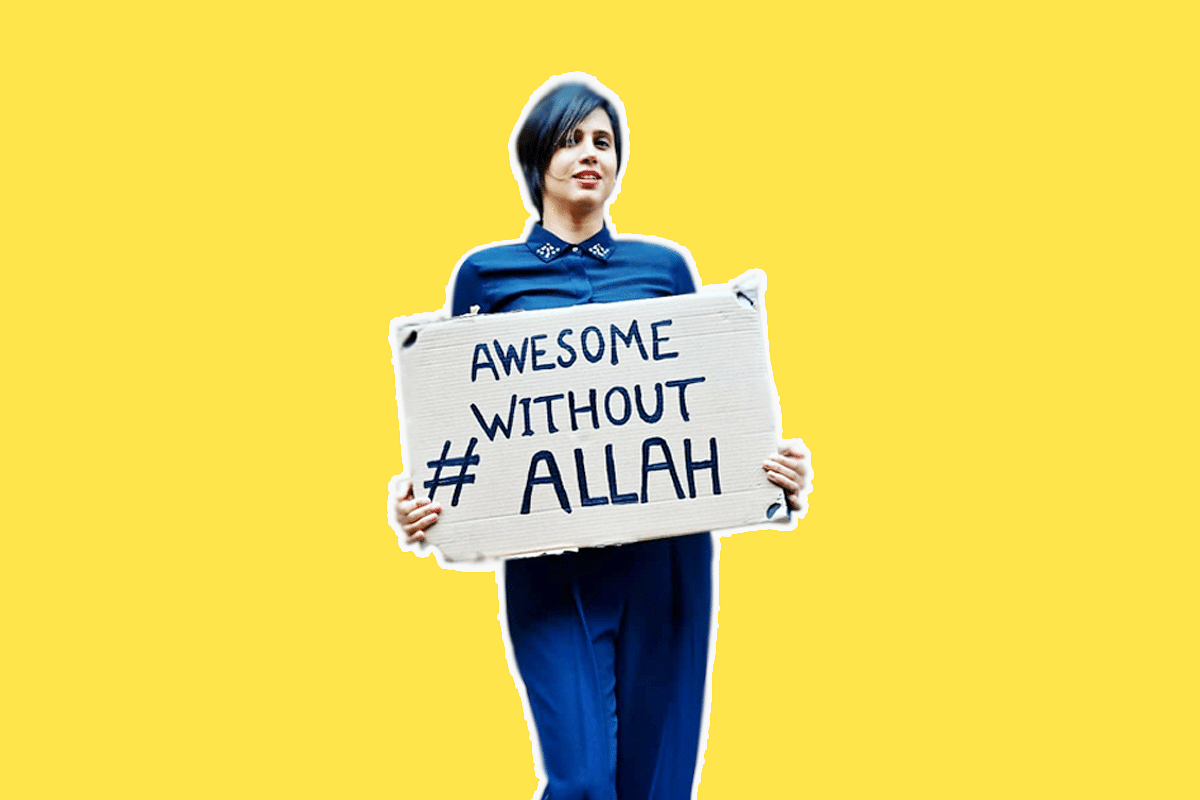 A banner of the campaign

For the past few days, the hashtag #AwesomeWithoutAllah is trending on Twitter. Ex-Muslims across the world are celebrating leaving Islam and sharing with ‘twitterati’ their happiness on being free from the shackles of Sharia and acquiring newfound freedoms which they could only imagine before.

Ex-Muslims of North America (EXMNA), a non-profit organisation, is spearheading this campaign online as well as offline. It has put up billboards at various public places. “Nearly one in four Muslims raised in the United States have left Islam,” reads one. “Godless. Fearless. Ex-Muslim,” it adds.

One of the goals of EXMNA is to reduce discrimination faced by those who leave Islam. It promotes secular values and is working towards making religious dissent acceptable. The initiative was founded in 2012 by Muhammad Syed, a human rights activist.

Islam is a one-way street as far as its affiliation is concerned. It allows, no, insists, on converting people of other faiths. But no one can leave it for the punishment decreed by Sharia (Islamic law), for apostasy is death.

And killing someone for leaving Islam is not a mere disturbing theory. It is regularly enforced across the Muslim world and that includes even the Western nations where Sharia is not the law. Where the state is not Islamic, zealous Muslims take it upon themselves to punish those who ‘stray’ from the path of Allah. Last week, two Muslim men were arrested by the authorities in the UK for plotting to kill a female relative who had renounced Islam.

"This is why @ExmuslimsOrg works to normalize dissent in Muslim communities. This is why we run campaigns like #AwesomeWithoutAllah," tweeted Sarah Haider, executive director at EXMNA.

In such a scary environment where apostates have to live in constant fear of getting killed, what the organisation is doing is quite courageous.On its call to trend #AwesomeWithoutAllah on Twitter, many ex-Muslims have shared their stories on why they are happy to leave Islam. And it should come as no surprise that most of them are women, given their secondary status in the religion.

Nik, a co-founder of Ex-Muslim Support Network of Australia and who goes by the Twitter handle @HereticalGray, explains why she is awesome without Allah. “Because no child should be forced into a hijab/niqab. Because my worth is not determined by a cloth. Because by removing my hijab, it does not mean I am an immoral person that deserves to be raped. Because I believe everyone has a choice,” she tweeted.

“Now we are free to enjoy life as we want. Our minds are free to think what we want. Our hearts are free to love who we want. We are no longer under the commands of some narcissistic demanding being,” tweeted Yasmine Mohammed. Her profile reads: think outside the kaaba (which is depicted in form of an emoji).

‘Unapologetic Madow Lover’ (@gabariskufilan), an honour killing survivor, says she left Islam for feminism. “Because as a radical Black feminist, I can NOT be simultaneously Muslim and feminist. I choose women’s liberation. I love to travel solo, wear whatever I want without victim blaming and support LGBTQIA rights," she tweeted.

"My mother wanted me dead for removing hijab & leaving her house. She endlessly prayed for God to kill me from the moment I left & honestly believes I'm going to die soon bc "allah listens to her prayers"," tweeted Jinan Murtad, a Muslim-turned atheist, sharing her deeply personal story. “Its been 2 yrs now, I'm still alive & well but mostly #AwesomeWithoutAllah," she added.

The best part about leaving Islam, according to Meriem who recorded a video for the EXMNA campaign, is that she doesn't simply pray or fast anymore. “I am breaking free from a toxic, abusive and patriarchal environment,” she said, adding that, “No one can force me to wear something, or do something, or feel something, or be something that I'm not.”

Zara Kay, a Tanzania-Australian, tweeted a picture with her dog. “I am #AwesomeWithoutAllah Because puppies! No more feeling like I shouldn't touch dogs because they're najis," she gave her reason. She is getting a lot of abuse and threats on Twitter for coming out as an Ex-Muslim. But she is not deterred.

“I woke up to 30 messages in my inbox, people wishing death to me, calling me a bitch, talking about hellfire, or wanting to kill me. This is exactly why we need to keep fighting,” she tweeted. She also posted screenshots of some of the abuses coming her way.

The #AwesomeWithoutAllah stirred up the pot. #Muslim Twitter has been awful to #ExMuslims, it's not the harassment that bothers me, it's that people genuinely believe apostates should be killed.
If you're not stand up for us & with us, you're on the wrong side of history. pic.twitter.com/8WOVi9fVOD

On all the backlash that the 'Awesome without Allah' campaign is getting, EXMNA executive director Sarah Haider said she was 'amused by the many "omg it's the end of timess!!!" comments by believers in response to our billboards and the trending of #AwesomeWithoutAllah. I have good news! It's not THE end of times! It's the end of A time — the end of a time of religious privilege, abuse, persecution."

"If #exMuslims speaking up about their persecution, legalized murder in 12+ countries, their jailing & torture, myriad other horrors they face due to Islam makes YOU uncomfortable, it's because you can't bear to look at yourself in the mirror, have some shame!," EXMNA founder and president Muhammad Syed tweeted.

It's not just women who are speaking out and coming out of the closet. Muslim men are also doing so in droves.

Sohail Ahmed, an Ahmadi Muslim by birth, says that 'the best part of leaving Islam was in no longer having to defend verses of the Quran where the inequality of men & women is baked in.

Ali Malik, who is an atheist now, tweeted that is awesome without Allah 'because how independent, human, humble and compassionate it made me.'

"The best part of leaving Islam is to be free from mental shackles." said Abdullah Sameer in a video he shot for the EXMNA initiative.

Alireza Azami posted a photo with the hashtag showing his middle finger.

Supporting these voices of dissent, Ali A. Rizvi, a Pakistani-Canadian and author of The Atheist Muslim, said that Muslims are not immune to reason, secularism, and enlightenment. “We normalised lapsed Catholics, secular Jews, and ex-Mormons. Now it’s time to normalize ex-Muslims,” he tweeted.

Islamic theology has no love lost for the non-believers. It decrees unrelenting hostility towards kafirs. The believers must shun all kinds of relationships with them and if they are to be engaged then that should be done strictly out of necessity. They cannot be accorded any position of respect.

Even saying words of respect to them is not allowed. Not even in their death. To ask dua for them is haram. Their places of worship are places of the devil. Their festivals are haram. They are physically detestable and untrustworthy.

It is no wonder then that when a believer leaves Islam and becomes a non-believer, it is considered a great affront to the religion. That's why the punishment for apostasy is nothing short of death.

If some ex-Muslims are daring to come out in the open and speak against the problematic aspects of their former religion, their dissent not only must be fiercely protected but also promoted.

They are doing a great service to humanity and even Islam itself. Criticism and dissent is the first step toward reform. And Islam needed reformation yesterday.