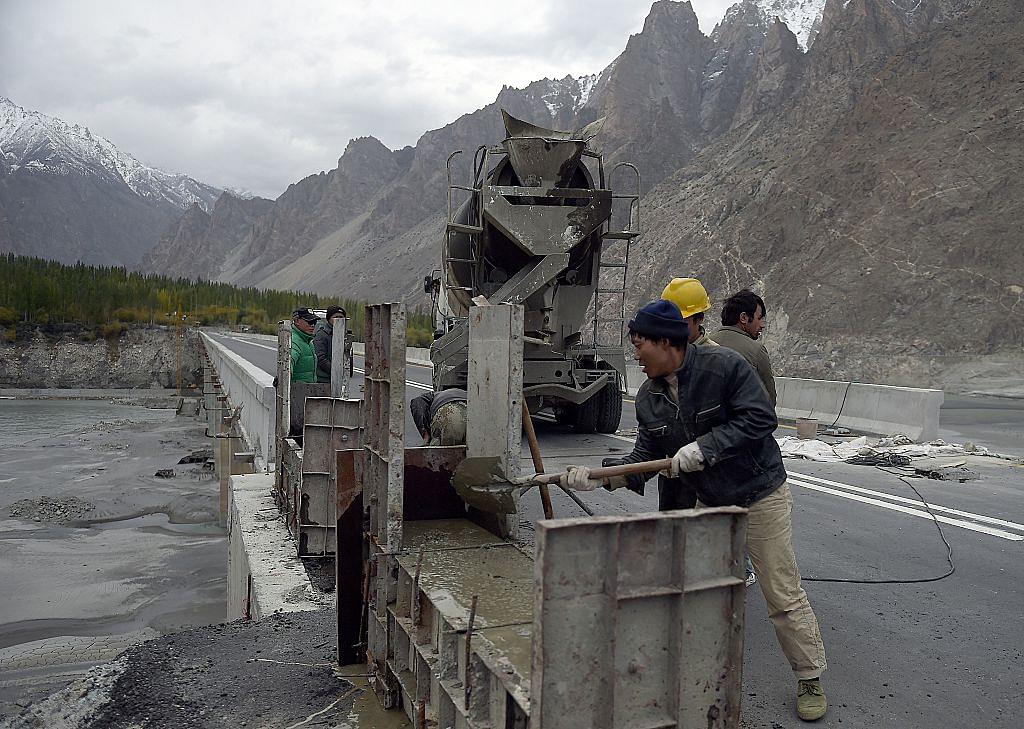 In a major boost to China’s overambitious One Belt One Road Initiative, a train from the traditional hub of Yiwu was fagged off to Tehran earlier this year. This container train covered a distance of more than 10,000 km in fourteen days across the New Silk Road Economic Belt forming a part of the multi billion dollar One Belt One Road initiative.

As envisaged now, the new silk road connectivity to West Asia would help China take forward its economic and commercial interests while helping strengthen its geopolitical influence in this oil rich part of the world. As it is, China has already inked a strategic partnership pact with the sanction free Iran to take care of military and security cooperation as well as intelligence sharing.

According to Chinese media reports, more than 4,000 businessmen and entrepreneurs of West Asian origin are now located in the city of Yiwu, which, last year, set a record of exporting goods and commodities worth more than $8-billion to West Asia.

By all means, the striking advantage for China is that it has deep insight into the dynamics of Iranian market as a consequence of its association with many of the Iranian development and infrastructure projects during the days Iran was under sanction.

As pointed out by Li Shaoxian, an expert on West Asian studies at Ningxia University, the reopening of the Iranian market would boost competition between China and West in a big way.

And according to An Huihou, China’s former ambassador to Egypt, Iran has a strong desire to participate in the Silk Road Initiative as part of the plan to revive its economy damaged by the sanctions.

On another front, with a view to strengthen its position in the Tibetan Autonomous Region(TAR), the pan Eurasian Belt and Road initiative will be reinforced with the construction of the Qinghai-Tibet rail line which would stretch close to the borders of Nepal and Bhutan.

The end goal of One Belt and One Road initiative is to efficiently link the commercially vibrant Eurasian and African markets that would, in turn, serve to reinforce Chinese quest to emerge as the manufacturing hub of the world. Further, it would serve to strengthen Chinese diplomatic clout and geopolitical influence in this part of the world in a big way.

The two components of One Belt One Road initiative are: New Silk Road Economic Belt linking China with Europe via central and western parts of Asia and the 21st Century Maritime Silk Road (MSR) project that would bring into its loop S.E.Asia, Africa and Europe. This implies that only South and North American continents will remain outside the scope of the Chinese One Belt One Road initiative.

Meanwhile, a write up featured in the Hongkong based, South China Morning Post, has warned Beijing against going ahead with the One Road One Belt project in the disputed regions. The article authored by Shi Yinhong, a Professor of International Relations and Strategic Studies at China’s Renmin University, has called for exercising prudence while going ahead with the project. The article said-

Prudence is required in dealing with the problems that may arise during the initiative as well as with regard to other strategic projects including the Bangladesh-China-India-Myanmar economic corridor and the China-Pakistan economic corridor..

Of course, China has much reason to worry about the safety of its multibillion dollar investment on China Pakistan Economic Corridor (CEPC) project that would be an important link in One Road One Belt initiative.

For the on-going insurgency in Balochistan province of Pakistan as well as the far from clear status of Gilgit-Baltistan region held illegally by Pakistan could prove a major impediments in the implementation of $46-billion CEPC that involves a network of roads, railway lines and pipelines from northwest China to Gwadar, the deep sea port overlooking Arabian sea in Balochistan.

Incidentally, Gwadar port is under Chinese administrative and management control. In order to protect the huge Chinese investment, the port city of Gwadar has been turned into a virtual fortress with a heavy troop reinforcement. Of course, Baloch separatist leaders and Baloch tribal elders have opposed CEPC, which they, would benefit only Punjabis.

Rightly and appropriately, India has raised serious objection to CEPC because a part of it runs through the disputed Gilgit-Baltistan area. India has also protested the move by Pakistan—under Chinese pressure– to give a legal status to Gilgit –Baltistan by declaring it as a constitutionally recognised part of Pakistan.

Till now, Pakistan as part of the its strategy of keeping the Kashmir dispute alive had not provided constitutional recognition to Gilgit-Baltistan where there is a growing opposition to Chinese sponsored projects.

Of course, China has expressed its willingness to accommodate its One Belt On road initiative with India’s Mausam and other connectivity projects to strengthen the link to South Asia region. As pointed out by Le Yucheng Chinese Ambassador to India -

The One Belt One Road initiative can also be linked up with India’s Spice Route and Mausam projects, thus forming a new starting point and new bright spot in China-India cooperation.

But then India has neither the resources nor the political commitment to undertake a connectivity project on par with One Road One Belt initiative. Of course, as part of its “Look East” policy aimed at boosting trade ties and strategic relations with the countries in S.E. Asia, India is now focusing on developing industrial estates, food and spice parks in border towns.

Similarly, there would be a focus on linking the mountainous north east by road to S.E. Asia through a tri lateral highway passing through Manipur and Myanmar and ending up at Mae Sot in Thailand.

A vision document, jointly prepared by a composite team from various Ministries of the Chinese Government reveals that this ambitious connectivity project while impacting more than 4-billion people would generate a trade of around US$2.5 trillion over the one decade.

In the ultimate analysis, the “Belt and Road” project, when fully implemented, is expected to shift the balance of trade and geo-economic power towards Eurasia. As envisaged now, the connectivity projects forming part of this grandiose Chinese initiative will, in the long run, help align and coordinate the development strategies, business models and manufacturing activities along the Silk Road stretch.

Further, it would go along way towards tapping the market potentials in the region, promote investment and consumption in addition to opening up new job opportunities even while enhancing people to people contact. China has committed to mop up its domestic resources to see this project through.

The push factor for China to ahead with its One Belt One Road strategy is the need to boost trade and manufacturing in the context of its rapidly ageing population placing a severe strain on its economy. Indeed, the vital sinew of the Chinese economy is based on the mantra of “export or perish.”

Against this backdrop, the US$40-billion Silk Road infrastructure fund that China has floated is being utilised to create linkages in the form of roads, highways, rail tracks and fibre optic highways to help boost business opportunities in the countries and regions along the Silk Road project.

The aim at the end of the day is to integrate the economies of Asia and Europe along the Eurasian corridor. On the other hand, the 21st Century Maritime Silk Road (MSR) project envisions the creation of ports, harbours and shipping facilities. These ports and harbours will be linked up with the hinterland by a string of land arteries.

And this infrastructure will eventually join with the Silk Road Economic belt at appropriate points. Chinese President, Xi Jinping, had already offered investors from Asia and Europe to become a part of the Silk Road fund for facilitate the development of specific projects.

As it is, China has diverted a part of its foreign exchange reserves into this fund. For China’s “One Road, One Belt” strategic vision seeks to establish new “engines of growth” along the Eurasian corridor to support Chinese plan to emerge as the manufacturing hub of the world.

Russia will be a core partner in China’s Silk Road strategy. Clearly and apparently, China-Russia partnership will have as its thrust the rapid development of Russia’s sparsely populated Far East bordering on China.

“The One Belt, One Road initiative is the product of inclusive cooperation and not a tool of geo-politics and must not be viewed with the outdated cold war mentality,” says Chinese Foreign Minister Wang Yi.

Successful revival of the ancient trade routes require not only physical connectivity and requisite infrastructure, but even more important, a climate of peace, stability, mutual trust, respect and support for mutual prosperity and free flow of commerce and ideas.

Economic imperatives in China as much as the keenness of the Chinese political leadership to strengthen its geopolitical influence across Asia and Europe seem to be the engine that drives the mammoth “One Belt One Road” Initiative.

This article was first published in the Indian Defence Review .