Smoke And Mirrors: How Global Indices On Democracy And Freedom Rate India 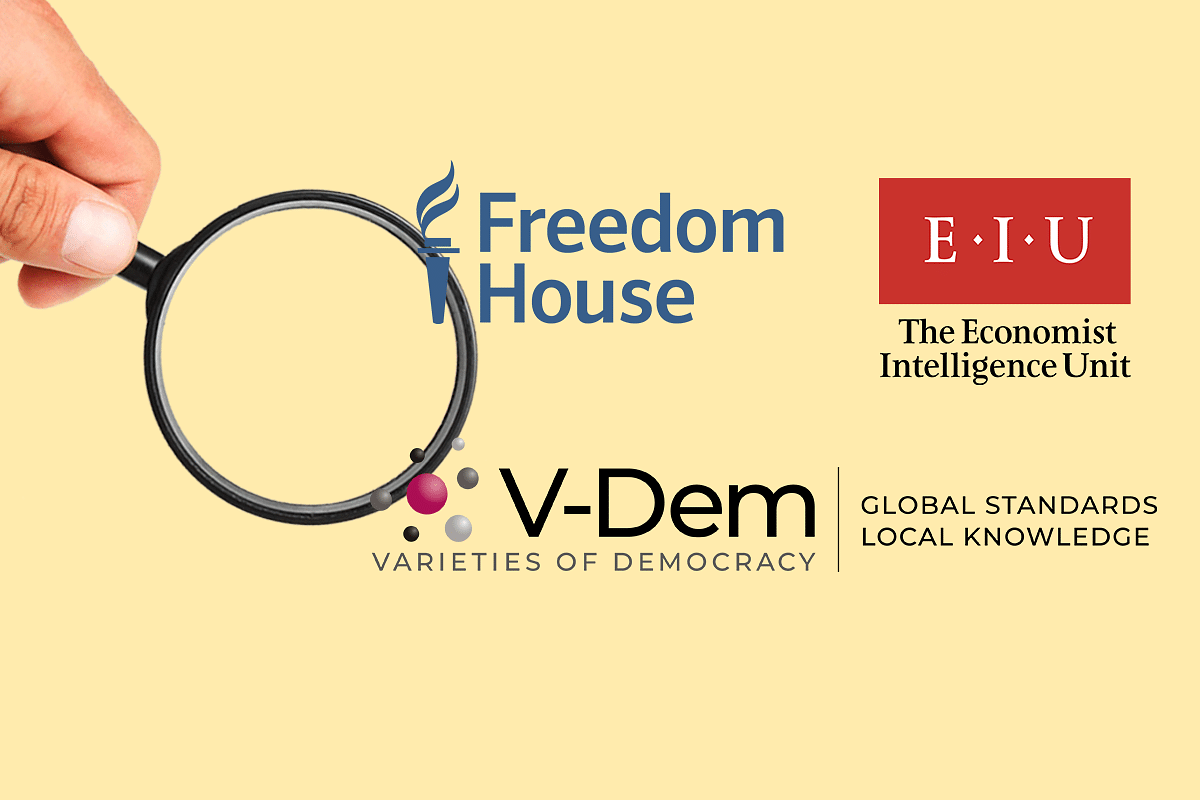 Taking note of India's 'poor performances' in recent global indices on democracy and freedom, Economic Advisory Council to the PM (EAC-PM) has released a report.

Authored by member of EAC-PM Sanjeev Sanyal and deputy director of EAC-PM Aakanksha Arora, the paper investigates three opinion-based indices. These indices are:

EAC-PM points towards four "serious problems" with these methodologies:

Here's dive into each index separately to decode them and understand the problem:

Freedom in the World Index

The overall scoring is based on a set of 25 questions (4 marks each) on seven topics which are answered by staff/analysts/consultants/experts. A country can get a maximum of 100 marks- 40 for political rights and 60 for civil liberties.

Notably, the previous two times when India was downgraded to ‘partially free’ status were during 1975-76 (Emergency period) and 1991-96 (years of economic liberalisation).

Moreover, countries like Northern Cyprus (a Turkish-occupied area known for ethnic cleansing of its indigenous Greek population), Timor Leste, Montenegro and Mangolia have higher scores than India and have been categorised as 'free'.

EAC-PM analysed that some media reports were used and some issues were cherry picked to make the judgements.

The index is based on responses to 60 questions spread across five categories: electoral process and pluralism, functioning of government, political participation, political culture and civil liberties.

The answers to these questions are taken from two sources: expert opinions (45 questions) and public opinion polls (15 questions) if available.

However, for India, the score is based only on expert opinions from 2012 till today due to the unavailability of survey reports. The report does not reveal the number, nationality, credentials or even field of expertise of the experts.

India has been kept in the category of ‘flawed democracy’ since 2006 and its rank deteriorated sharply from 27 in 2014 to 53 in 2020. In 2021, the rank improved slightly to 46 on account of repealing the farm laws, as the report mentions.

Cross country comparisons show that India’s rank is below various countries that are clearly less democratic like Malaysia or are recently formed states like Lesotho.

EAC-PM analysed that the questions asked are quite subjective, making objective scoring difficult. Hence, they do not lend themselves easily to cross-country analysis.

There are approximately 473 variables in the V-DEM dataset based on some facts and ratings provided by experts.

The scores on most of these V-DEM indices have been declining for India since 2014 and in fact India was downgraded to "electoral autocracy" in 2021.

Notably, the previous time period when there was a considerable decline in democracy indices was in the year 1975-76 which was a period of Emergency.

As per the latest report, India’s rank in V-DEM Liberal Democracy Index is 93, while the Kingdom of Lesotho has been ranked 60, Timor Leste 64, Kosovo 79, Nepal 71 and Bhutan 65.

EAC-PM found that India does well on objective parameters such as share of population with suffrage or share of direct popular vote but shows sharp decline in categories which are based primarily on "expert opinion".

Also, articles from media seem to have been cherry picked to make judgements and questions are subjective in nature making it very difficult for any expert to answer the questions objectively.

Why we can't ignore them

These perception-based indices cannot be ignored as mere opinions as they find their way into concrete things such as sovereign ratings via World Bank’s World Governance Indicators (WGI) which is based on a combination of lot of these indices.

These will become even more important in future as Environmental, Social and Governance (ESG) indices are introduced into global business/investment decisions.

Thus, EAC-PM suggests that the Indian government should request the World Bank to demand transparency and accountability from think-tanks that provide inputs for the WGI.

In the longer term, independent think-tanks in India should be encouraged to research in these areas and come up with their own indices so that comparative indices are available to break the monopoly of a handful of Western institutions.

Also read: An analysis of the V-Dem data on the decline of democracy in India reveals interesting insights—about V-Dem