Explained: The Planning Behind The World’s Largest High-Speed Rail System In China 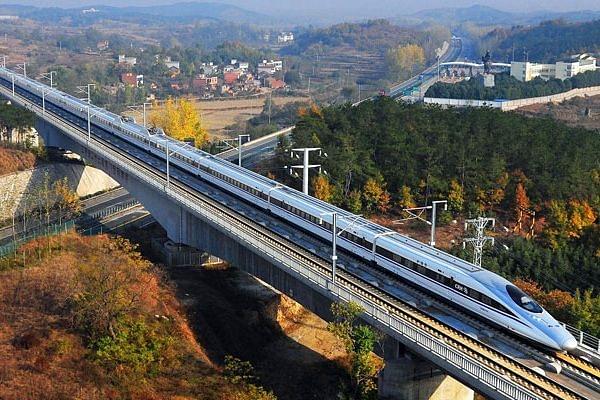 A high-speed train in China.

Between 1901 and 2000, the United States of America fought two world wars, countless other regional wars across the Middle East, Europe and Asia, and went from being an isolated nation in the West to the nucleus of the global economy. This transformation had one key component — concrete.

From bases across the globe for their armed forces, the expressways that today bind their country to the high-rises that are a hallmark of the American dream, concrete was used everywhere.

However, the quantity of concrete that was used by the United States in these hundred years was the equivalent of what China used between 2011 and 2013. To put things in perspective, at some point in these three years, the concrete used in the making of the entire Manhattan was used by China in less than a week.

A majority of the construction in China has been used to sponsor the infrastructure boom. Even though the slowing Chinese economy and ghost cities could expose the underlying bubble in this infrastructure spree, it is the high-speed rail system where China’s big gamble has paid off.

In the last 10 years, China has created more than 26,000 kilometres (km) of dedicated high-speed railway (HSR) lines. China’s HSR lines alone constitute 66 per cent of the HSR lines across the globe.

While agencies in India struggle to bag the necessary sanctions for construction, China is operating more than 50 times that length and has another 25 times the length in construction when compared to India.

Today, China operates over 2,600 pairs of China Rail High-speed (CRH) trains each day. This number has a lot to do with cheap labour, manufacturing ability, but most importantly, it is about geography, for not even India and the US or entire Europe would warrant such scale of HSR operations given the population and economy size.

In the last 50 years, while Japan’s version of HSR, the Shinkansen, has carried 11 billion passengers. China’s HSR network, in merely 10 years, has hosted 7 billion, showcasing how critical population is to China’s desire for an HSR network.

One of the reasons a project of this scale or even one-tenth of it cannot be implemented in India is the political resistance that follows, as already being witnessed in the case of the bullet train. China, however, opted for special-purpose asset construction and management companies.

The companies under this special-purpose vehicle were joint ventures between the central and provincial governments, thus securing the indispensable participation and cooperation of the local governments in the entire process including land acquisition, construction, finance and labour. Also, the cooperation between the companies behind the HSR infrastructure, train manufacturing, and other research and development entities further aided the scaling of HSR in China.

This had a direct impact on cost and innovation. China’s HSR has an average cost between $17 million and $21 million for every kilometre of HSR line, the lowest in the world. In comparison, California’s HSR, 836 km in length, will cost the government $77 billion, or $92 million for every kilometre, and will be operational by 2029. Thus, China is saving both money and time by exercising its political will.

This exercise has been complemented by a complete overhaul of the rail industry structure. Firstly, joint ventures have central and provincial governments as stakeholders. In many cases, some non-railway state-owned enterprises or private companies are the third partners in these joint ventures.

These joint ventures raise money for HSR projects via debt and equity. The stakeholders contribute the equity with provincial governments making their contribution in the form of land, and the other half of the financing is done via loans. As with everything else in China, most of these loans come from banks backed by the state.

Secondly, HSR planning has been done through the medium-and long-term railway plan (MLTRP). It was in 2004 that the first MLTRP for HSR was proposed. A key feature of the HSR MLTRPs has been that they cannot be easily modified, thus eliminating any possibility of delays in construction or operation.

Once the plan is released, the state, regional, and council departments must provide active support and improvise policies in a manner that suits the MLTRP for HSR network. Provinces also develop their own plans for the HSR network that are consistent with those prepared by the joint ventures, thus allowing for its development in an ordered manner.

The last big revision to the MLTRP came in 2016 when the network structure was revised from ‘four horizontal and four vertical’ corridors to ‘eight vertical and eight horizontal’ corridors. This revision estimated the total length of the railway network in China to more than 150,000 km with over 30,000 km of HSR lines.

Thus, the travelling time between large and medium cities has been reduced to 1-4 hours while that between regional centres it is between 30-120 minutes. The planning and implementation consistency between the central government and provincial administrations in the context of the HSR network has enabled the stupendous growth in the last 10 years. The same consistency would be difficult to replicate elsewhere, especially in democracies like India and the United States.

While the 2016 MLTRP provided for ‘eight vertical and eight horizontal’ corridors, connectivity has improved due to a number of connecting lines within the basic HSR network. This has aided in the growth of coverage and connectivity of regions, and has also improved the overall utility of these HSR lines.

Eventually, China aims at connecting all cities with a population of 500,000 or more with a megacity in less than four hours. For provincial centres, the target is two hours.

Even before they could put the muscle, mechanics, markets and economics into play, China ensured complete cooperation of all the stakeholders in the administrative process, resulting in easy land and labour acquisition, and also by making provincial governments accountable for the implementation process.

The economy may slow in China, the trains never shall.

The article is the second in a multi-part series on China’s infrastructure, trade war, and economic growth. Read the first part here.