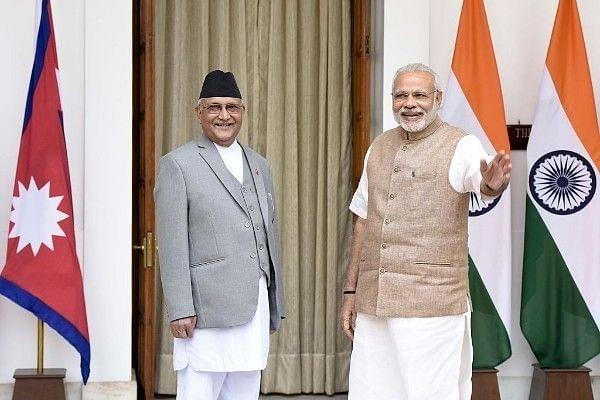 Oli had summoned a cabinet meeting at his official residence on Sunday morning and was widely expected to discuss the withdrawal of an ordinance amending an Act.

The promulgation of the ordinance has evoked a storm of protests and sharpened the rift within the ruling Nepal Communist Party (NCP).

However, as soon as the cabinet meeting started, Oli asked his ministers to approve his proposal to recommend dissolution of Parliament to President Bidya Devi Bhandari.

It is learnt that the ministers were shell-shocked to raise any objections and Oli took their silence as approval.

However, as soon as news of this spread, a storm of protests erupted. NCP leaders who are ranged against Oli — the party co-chair Pushpa Kamal Dahal and former Prime Ministers Madhav Kumar Nepal and Jhala Nath Khanal as well as many other top leaders of the ruling party — are meeting to chart out their next course of action.

Many anti-Oli NCP leaders and top-ranking leaders of the NC and JSP that Swarajya spoke to said that in case the President approves Oli's recommendation and dissolves Parliament, they will approach the Supreme Court.

All of them said there is no provision in Nepal's Constitution for a Prime Minister heading a majority government to recommend dissolution of Parliament.

Only if the ruling party loses the trust of the House or in case of a hung Parliament can a Prime Minister make such a recommendation.

The NCP enjoys a nearly two-thirds majority in the lower House and the term of the current Parliament expires only in end-2022.

Oli has also recommended to the President that general elections to the lower House be held on May 6 next year.

Political observers in Kathmandu say that the President, who was a prominent member of Oli’s Communist Party of Nepal (Unified Marxist-Leninist) before becoming the country’s head of state, is likely to accept Oli’s recommendation.

Oli's CPN(UML) and Dahal's Communist Party of Nepal (Maoist) had united in 2017 to form the Nepal Communist Party (NCP). It is widely believed that the unification was steered by China.

The President has, in the past as well, accepted many controversial recommendations made and ordinances issued by Oli.

Either way, say Nepal’s political observers, Oli will find himself embattled. And in order to win back the people’s support, he will do what he does best: fall back on nationalism and jingoism.

That will only mean raising the anti-India pitch once again. The recent thaw in ties between India and Nepal and efforts to get bilateral ties back on track will, thus, suffer a setback.

Oli had, in order to gain the upper hand in his turf war with NCP co-chair Dahal and some other leaders in his party who had turned against him, positioned himself as a nationalist and indulged in anti-Indian jingoism that caused serious damage to bilateral ties.

He had, earlier this year, successfully thwarted efforts of Dahal and other NCP leaders to cut him down to size by positioning himself as a staunch nationalist.

Oli’s detractors in the NCP had shied away from attacking him openly since they feared that doing so would leave them open to charges that they were acting at India’s behest at a time when Oli was defending Nepal against India.

Oli is likely to fall back on the same tactic now as he tries to win back public support.

A split in the NCP is imminent and Oli will try his best to whip up anti-Indian sentiments to muster support for his CPN(UML).