Human Rights Watch: Here’s How The US Fares On Racial Disparities And Hate Crimes 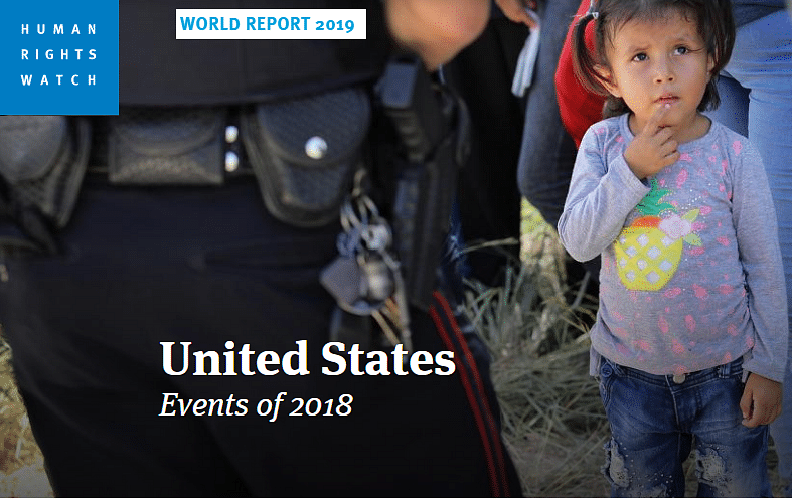 Turning the gaze on the US to see what the Human Rights Watch report has to say about events occurring in its own backyard.

The United States of America, which celebrated its Independence Day on 4 July, has always portrayed itself as some sort of a global policeman. Thus, its Department of State, which is like India’s Ministry of External Affairs, compiles reports on human rights, women development and religious freedom across the globe through its embassies.

This has left many wondering if everything is hunky dory in the US. Not many have tried to scrutinise the US record on these aspects. However, the Human Rights Watch report on events in the US during 2018 makes for interesting reading.

The World Report 2019 of the Human Rights Watch deals with various issues such as racial disparities, hate crimes, older people rights, girls and women rights and freedom of expression and assembly, among others. The report makes an uncharitable introduction of the situation in the US saying:

The United States continued to move backward on human rights at home and abroad in the second year of President Donald Trump’s administration.

It follows up by saying that with the Republican Party controlling the legislature in 2018, the Trump administration and Congress passed laws, implemented regulations and carried out policies that violated or undermined human rights.

According to Human Rights Watch, state and federal jails in the US held over two million people, while another 4.5 million were on probation or parole. Women were the fastest growing ‘correctional population’ in the US, with Oklahoma incarcerating more women per capita than any other US State. A sad state of affairs in Oklahoma is that many women could not avail bail there.

In particular, the report said that former US Attorney General Jeff Sessions rescinded policies that would have avoided filing cases in crimes that would result in longer minimum sentences and stopped racial disparities in the US federal system.

The Human Rights watchdog said that death penalty was being implemented in 30 states still. Quoting the Death Penalty Information Centre, it said 21 people had been executed in eight states by the end of November 2018 with 11 of the executions occurred in Texas. Barring one execution in the electric chair, the rest were administered lethal injections. The report has expressed concern over the Trump administration and its officials calling for death penalty to drug sellers.

In contrast, the death penalty database of Cornell Law School says that only three death sentences have been carried out in India in the last 12 years. The last time a death sentence was executed in India was the hanging of Yakub Memon, convicted for financing the 1993 Mumbai blasts.

The World Coalition Against Death Penalty, however, has reported that 162 people were sentenced to death in India in 2018 by various courts --- a new high in two decades. At least 426 people are on death row in India, as a result. The report also pointed out that the Supreme Court had commuted to life imprisonment 11 of the 12 death sentences against which appeals were filed before it.

Quoting the Washington Post, the report said 876 people were killed in the US during 2018 and of those killed whose race was known, 22 per cent were African-Americans. Among the unarmed people killed by the police, 39 per cent were from the African-American community. The human rights body says that racial disparities in police use of force, arrests, citations and at traffic stops continue to exist.

Racial disparities exist even in the arrest of juveniles, the report said, adding that this was despite the Justice Department reporting a decline. Children of colour were disproportionately represented at every stage and in 37 states in the US, the rates of incarceration were higher for African-American children compared to Whites.

Every year, 32,000 children under 18 years of age are sent to adult jails and all the federal states in the US continue to prosecute some children in adult criminal courts. Some 1,300 are undergoing life sentences in jails without parole for crimes they committed when they were below 18 years of age --- a practice that has been ruled unconstitutional in the US by the Washington State Supreme Court in October 2018.

The report says that various organisations and the US government use different methodologies to collect information on hate crimes but there is an increase in the number of such crimes compared with the previous year.

VOA News, citing data compiled by the Centre for Hate and Extremism at California State University, reported that 921 bias incidents or hate crimes took place in 2018, 17 per cent higher when compared with 2017, in the 10 largest US cities. Hate crimes had increased for the fifth consecutive year in 2018 with African-Americans and Jews being the primary targets.

In comparison, Hate Crime Watch by Factchecker shows that 291 hate crimes have taken place in the last 10 years resulting in 99 deaths and injuries to 728 persons.

Older People’s Rights And Rights of Women And Girls

The Human Rights body expresses concern over the rights of older people. It says that many old people staying in nursing homes across the US and suffering from dementia are administered anti-psychotic drugs to control their behaviour. However, the drugs are administered without the individuals’ consent, which the report says amounts to cruel, inhumane and degrading treatment.

Reports of sexual harassment and misconduct by high-profile men continued in 2018, highlighting abuses suffered by women at work and in public places. The report also expressed concern over the appointment of Brett Kavanaugh for lifetime to the US Supreme Court without thorough investigation of allegations of sexual assault.

The Human Rights Watch report was critical of the appointment of Gina Haspel as director of Central Intelligence Agency (CIA). Haspel, it alleged, ran a CIA detention centre in Thailand where she oversaw torture and in 2005 “advocated and helped to destroy” video-taped evidence of the agency’s torture.

The report objected to the amendment to the Foriegn Intelligence Surveillance Act last year, saying it permitted warrant-less surveillance of foreigners and overseas entities besides capture and search of Americans' communication. It also quoted the director of National Intelligence in a report in May 2018 that said intelligence authorities collected telephone call records of over 534 million in 2017, up three times over 2016,

The human rights body also criticised US President Donald Trump’s attitude towards the media and said that technology firms in the US were under pressure in 2018 to curb freedom of speech on platforms such as Facebook and Twitter.

Overall, the Human Rights Watch has given a handy tool for the opponents of the US. The report can actually help other countries to point out to Washington its own record on human rights in case its officials were to bring up human rights record of other countries on the table.