If They Want To Keep China Out, India And Nepal Should Stop The Self-Destructive Pettiness 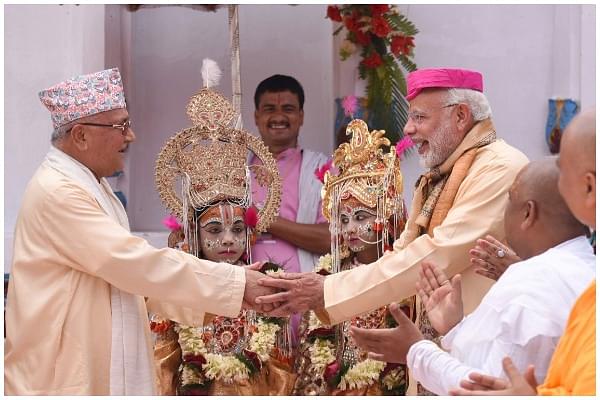 In International Relations, the idealist and realist schools of thought often clash with one another. Like the liberal and conservative fights in the media, IR mandarins talk up their ideology, but both of them hark back quite boringly to the Peloponnesian war and Thucydides sooner than later. Actual practitioners go about doing their paperwork and trying to maintain status quo.

After the grandstanding and idealism during the times of Prime Minister Nehru, Indian foreign policy moved on to the realist side after being humiliated by the “Chini Bhai” in the war of 1962.

In fact, in the middle of the war, Nehru wrote to the President of the “capitalist” USA, John F. Kennedy, asking for military support. But with neighbours, emotions creep in more often than not, and the “idealist” side rears its head.

In the case of Nepal, relations have predominantly been driven by idealism. Historical, religious, social, cultural, economic and political ties have bonded peoples of both countries over centuries.

But in the last few decades, in dealing with communism, infiltration of fake currency and ISI operatives from Pakistan or canoodling with China, India has shown its stern face.

But, for Nepal, India’s principles have been questionable and the behaviour big brotherly. Any Indian Ambassador to Nepal, it seems to them, considered Nepal as a province of which he was a ‘governor’.

Along with him, Indian intelligence agencies, as anecdotes go, played around with slush money, intervening in the political process and media quite freely.

But the Indian side has always felt that they have been more than generous with Nepal, giving access to their goods and allowing their people to travel freely. For example, Nepali students form 21 per cent of the foreign students in India.

The Chinese saw an opportunity to exploit these simmering tensions between “brothers” to play the great game of encircling its Asian rival in India. While India was threatening about the Chinese monster, a section of the Nepalese politicians decided to eat rice with them.

As a newspaper editor put it: “Nepalese have been placed in a position to choose between sovereignty and democracy. India is a threat to the former and China to the latter.”

Prime Minister Modi got a great welcome during his first visit. But the foreign ministry babus bungled magnificently during the 2015 Madhesi blockade. Nepalese suffered greatly from the shortage of fuel and essential goods.

The anti-India sentiment catapulted the Communists to power in the complicated 2017 elections.

Oli made it an electoral issue, pointing to the Indian support to the blockade and breaking the coalition that he has led as Prime Minister a few months before.

Indian rupees that are freely in circulation in Nepal, was hit by demonetisation. People had to endure great difficulty to get it exchanged from across the border. Even now, INR 2,000 notes are not commonly accepted.

The editor-in-chief of a major news outlet confided in this author that, “If you ask any Nepali youngster about their inspiration or icon, it will invariably be an Indian, such as Narendra Modi, Virat Kohli, or a Bollywood star. But if you ask the same youngster about which country he dislikes the most, he will say India.”

Another area, where India perhaps blundered was the reconstruction efforts after the earthquake of April 2015. Though initially generous in contributing to the relief efforts, India did not take the leadership role in rebuilding the Hindu cultural icons.

The magnificent temples of the Durbar Squares in Kathmandu and Bhaktapur are being rebuilt with the aid of China, Japan and US. So much for Hindu brotherhood!

India is now jittery about China’s deep engagement with Nepal. It is left with a job to placate Nepal. Our babus forgot that prevention was better than cure. After the informal summit with Prime Minister Modi at Mahabhalipuram, Xi Jinping flew to Kathmandu to a rapturous welcome.

The government declared a national holiday and ordered government servants to line up on the streets to welcome Xi. Xi upgraded the relationship with Nepal to a strategic partnership.

Nepal had become part of the One Belt One Road (OBOR) project in 2017. In spite of knowing examples of Chinese investments in Hambantota Port in Sri Lanka, to railway line in Laos, to airport in Maldives putting these countries into a debt trap, the Nepalese side signed off 20 agreements during the visit.

With these lopsided deals in favour of China, the Nepalese government is lurching towards surrendering both sovereignty and democracy to China.

The trans-Himalayan corridor would cost Nepal $2.7 billion, which is about 1/10th of its Gross Domestic Product (GDP) of approximately $28 billion.

The environmental costs will be enormous; 98.5 per cent of the line would run through tunnels and across bridges.

If there were mistakes made by the “big brother” India, the “little brother” has been acting absolutely irrationally and out of spite.

One can understand if the prime mover of the relations with China is economic growth. But the social interventions have disappointed India much.

There is a push to teach Mandarin widely. On the other hand, there is opposition to teaching Hindi, though people in the Terai region speak the language widely.

There was an agreement for setting up a Confucius Institute at Tribhuvan University in Kathmandu.

Nepal is desperately poor. Its per capita GDP of $1000, is half of India’s. Connectivity will spur economic growth. But Nepal has seems to have discounted the possibility of dumping of Chinese goods. Just to indicate the lopsided nature of the current trade, Nepal imports NR 203 billion and exports NR 2 billion to China.

Nepalese leaders and intelligentsia have been worried about the developments. In a meeting with former Prime Ministers before Xi’s visit Oli was supposed to have promised to tread cautiously on Chinese investment offers.

Oli should have no illusions of being Lee Kwan Yu, who built up tiny Singapore into a global powerhouse.

Nepal does not have the strategic advantage of being in a trade hotspot. This generation of Nepalese leaders will go down in the dustbin of history if they act emotionally out of revenge and pave the way for Nepal to become another Tibet.

Pushed against the wall, it is a good time for India to engage with warmth with Nepal. Drilling sense into Nepal, either directly or through mutual friends, against the debt-trap and becoming a de-facto Chinese colony is important.

Nepal is India’s gateway to Tibet on which India should have strategic interests. Or even if India plays on the back-foot, it should consider the prospects of Uttar Pradesh and Bihar being dumped with cheap goods transiting through Nepal.

The population of Nepal is around 3 crore. UP and Bihar put together is around 28 crore. At least in self-interest, India should make peace with Nepal.

Over Nepali coffee or kharak chai, both Indian and Nepali bureaucrats should watch one of the many sibling-rivalry Bollywood movies. Though the villain causes trouble, common sense prevails and the brothers patch up.

The acrimony should give way to clear-headedness. Rebuilding trust is the first step towards preventing a lose-lose situation.

The relationship driven by idealism should stay that way.