India-Israel Relations: A Burgeoning Partnership That Can Only Grow Stronger 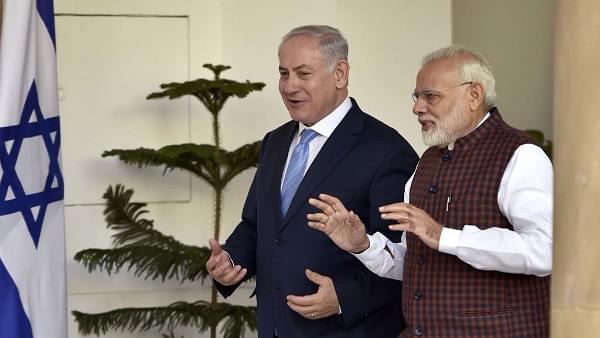 Israeli Prime Minister Benjamin Netanyahu’s just-concluded visit to India can be described as highly productive and successful – both on optics and substance. Prior to his arrival, Prime Minister Narendra Modi had called the visit “historic and special”. This was Netanyahu’s first visit to India, coming 15 years after the first visit by an Israeli prime minister, Ariel Sharon, in 2003.

Two aspects of the visit are particularly remarkable. First, it was a long six-day visit. Normally, heads of state and government visit even the friendliest of countries for a maximum of three or four days. That the Israeli Prime Minister decided to invest so much time, effort, energy and commitment to its relationship with India is indeed exceptional. Second, the visit came a little more than six months after the momentous and path-breaking visit by Prime Minister Modi to Israel in July 2017, the first ever by an Indian prime minister to that country after establishment of diplomatic relations in 1992.

Relations between the two countries have been expanding across a variety of sectors in a robust manner for 25 years now. It is however incongruous that despite the rapidly expanding ties, exchange of visits at the highest political level did not take place. Before the National Democratic Alliance (NDA) government took power in 2014, the only presidential visit from Israel was that of Ezer Weizman in 1997, which was followed by prime minister Sharon’s visit in 2003. All that changed with Modi’s assumption of power. A spate of visits both ways has been witnessed over the last three years. Israeli President Reuven Rivlin visited India in 2016. Indian president Pranab Mukherjee went to Israel in 2015. He however balanced this tour by also visiting Ramallah. Modi himself did not pander to any such demand or niceties and de-hyphenated the relationship with Israel and Palestine by visiting only Israel in July last year.

The twenty-fifth anniversary of diplomatic relations has hence witnessed both the heads of government visiting each other to provide a significant impetus to the bilateral partnership. It was earlier said that India treats Israel as a mistress: that it is happy to have an affair with it behind the curtains, but is not prepared to acknowledge this relationship in the open. With these two high-profile, back-to-back visits, this narrative has been shattered once and for all. The relationship has now emerged in the open as a regular partnership with a lot of promise.

Before the visit commenced, several naysayers and doubters said that the inbuilt contradictions in India’s support for the Palestinian cause and relations with the Arab and Islamic world will make this relationship a non-starter. To cap it, it was said that India had voted in the United Nations against the resolution to designate Jerusalem as the capital of Israel and that would be seen by Israel as an unfriendly act. Netanyahu laid all apprehensions on this score to rest at the very beginning of his tour when he said that one negative vote in the United Nations will have no impact on this blossoming relationship.

It is imperative that for the partnership to realise its full potential, both India and Israel behave as mature democracies and try to understand and appreciate the compulsions of each other on a variety of regional and international issues. The long hiatus in upgrading the political relationship to the highest level occurred because of India’s reluctance in acting in a manner that could compromise its interests in West Asia. India is heavily dependent on the Gulf to meet its energy requirements through import of oil and gas as well as for the significant remittances sent home by the large eight-million-strong diaspora working in that region. Safety and security of the Indian diaspora is also a matter of concern for India.

The country’s hesitation in fully normalising relations with Israel was also dictated to a significant extent by domestic political considerations as the government did not want to be seen as doing anything that would be construed adversely by the large domestic Muslim population. It would be essential for Israel to be mindful and cognisant of this background so that no misunderstanding or misplaced expectations derail the smooth progress of this propitious bilateral engagement.

The two sides have done well to focus on the huge potential that exists in taking the partnership to the next level. Defence is an area that had emerged even before diplomatic relations were established. Israel had come to India’s help in the wars in 1962, 1965 and 1971, as also after 1992, during the Kargil conflict in 1999. Israel has emerged as the third-largest supplier of sophisticated defence equipment to India and is likely to rapidly go up the ladder in the coming years. It is understood from Prime Minister Netanyahu’s tweet that the US$ 500 million Spike anti-tank missile deal, which was surprisingly rejected by the Defence Research and Development Organisation on the eve of the visit, is back on track probably as a government-to-government contract.

Israel is now collaborating with India not only in the supply of sophisticated defence equipment, but also in co-designing, co-production and manufacturing of these systems under the ‘Make in India’ programme. In addition to meeting India’s expanding needs in this field, it will also help in creating jobs and technological upgrades in the country. It will also boost innovation in this sector.

Innovation is an area where Israel has been the clear global leader. It has the second-largest number of startups, next only to the United States. This is particularly commendable considering the difference between the two countries in terms of size, population, gross domestic product and so on. Innovation in technology, water management, agriculture and other sectors are areas where both countries can cooperate to mutual benefit and advantage.

Several agreements covering a wide array of areas including cyber security, metal batteries, oil and gas, film production, space, solar and thermal technologies and so on were signed between the two countries. In addition, several contracts between the private sectors of the two countries were signed. Netanyahu came to India at the head of a large 130-strong business delegation from 102 companies. It was reported that talks on entering into a Free Trade Area will also commence. This would help in significantly enhancing the volume of bilateral trade from US$ 5 billion at present to the targeted level of US$ 10 billion in the near future.

Prime Minister Modi devoted abundant attention, time and care to be with Netanyahu during the latter’s stay in the country. This was limited not only to receiving him at the airport by setting aside protocol, as he had done for Barack Obama (2015), Sheikh Hasina (2017), United Arab Emirates Crown Prince Zayed Al Nahyan (2016 and 2017), but also accompanying Netanyahu to Gujarat, sharing the stage with him at Raisina Dialogue even though Modi was not scheduled to speak at the event, and on several other occasions. This sent out a clear message about the importance and significance that Modi accords to the visit.

Personal chemistry and bonhomie of course plays a useful role in advancing relations between two countries, but this is possible only when there is a wide congruence of mutual interest. As is evident, there is a broad commonality of interest between the two countries. Although it is a hyperbole to say, as Netanyahu commented that relationship between India and Israel is a “marriage made in heaven” (he had used the same expression during his recent visit to China), it is nevertheless true that it is a win-win partnership for both the countries. India needs technology, innovation, defence equipment, cooperation in counter-terrorism, training in intelligence gathering and so on from Israel, all of which are required to make India a secure, stable and prosperous nation with a better standard of living for its people.

For Israel, in addition to the huge market for its manufactured goods and technology as well as defence products (it supplies about 40 per cent of its annual production to India) that India represents, the significant intangible benefit is also the recognition and acceptance it receives from the largest democracy and rapidly growing economic power. More than 30 countries of the United Nations do not recognise Israel. Being accepted as a friend by India hence holds special value and significance for the Jewish state.

Cultural connections and people-to-people contact are a significant element of India-Israel partnership. India is one of the few countries in the world where Jews have not faced anti-Semitism. Jews have come to India in different phases over the last 2,000 years and lived in different parts of the country without facing any discrimination. Notwithstanding their small numbers, Jews have made a sizeable contribution to the cultural, artistic, military and literary life in India. Names of some of the better-known Indian Jews are Lt General JFR Jacob, Leela Samson, Nissim Ezekiel, Ruth Prawer Jhabvala, cine actors David, Sulochana and Nadira.

Netanyahu pulled out all stops to woo the Bollywood film industry by hosting the marquee event, “Shalom Bollywood”, in Mumbai, which was attended by the Bachchan clan and several of the high and mighty of the film industry. Netanyahu invited them to shoot their films in the beautiful locales in Israel. Two films starring Alia Bhatt, Jacqueline Fernandez and Sushant Singh Rajput were shot a few months ago in Israel and are likely to be released later this year. Bollywood's embrace of Israel will not only create jobs in Israel, but will also provide an impetus to tourism in that country.

All this synergy and congruity notwithstanding, there are issues like Palestine and Iran, on which both countries have divergent views. China and Pakistan will also provide a challenge, but of a lower magnitude. It would be expedient for both India and Israel to take these differences in their stride and not allow them to muddy or strain their bilateral ties.

Counter-terrorism, security, defence, cyber-security, agriculture, innovation, water management, films, people-to-people contact and so on are some of the significant areas in which relations between the two countries can grow rapidly. The countries would do well to provide their undivided attention to strengthening and expanding this partnership. Prime Minister Netanyahu’s visit will play a colossal role in taking bilateral ties several rungs up the ladder.