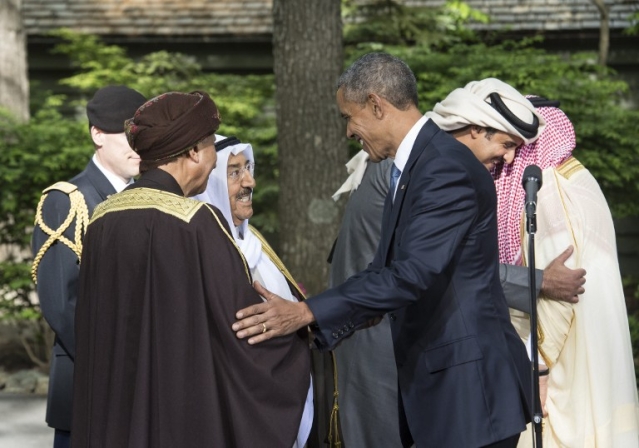 The US-GCC summit held in May was done with the purpose to reassure the Gulf-United States relationship by making sure that the N-deal with Iran was not at the expense of the safety of GCC.

Arab leaders of the Gulf Cooperation Council (GCC) and US president Barack Obama have renewed their nuptial vows since they last met in Camp David on May 13. Though reaching Camp David, wary of each other’s intentions, they both left assured of each other’s support. The two-day meet ended with an “unequivocal” US commitment “to deter and confront” any future aggression from Iran. Like an old married couple, the US and the Middle East have grown suspicious of each other since Iran played the mistress.

The proximity of US with Iran has made the Gulf uncertain, shaky, and insecure. Concerned that the Iran deal would mean that the US was more interested to help Iran than to save the GCC states, the Arabs asked the US at Camp David for a new, more explicit, and institutionalized ‘security architecture’ in the region. To the Sunni GCC countries, Shiite Iran is hegemonic and imperialist. So, the US-Iran proximity made the GCC suspicious of the US intentions. However, the Camp David meet ended with the return of the usual bonhomie between both the suspecting partners.

The GCC leaders feel that their relationship with the US, without any element of suspicion, has been elevated to a new level at the end of the summit. The meeting helped either side remove the element of suspicion. Not only have the Arabs got what they wanted, but Obama has also got from the Arabs an endorsement of his N-deal with Iran.

Mutual suspicions are far too deep to disappear overnight. But the meeting has reflected not only the strain between the Sunni Arab and the Shiite Iran, but also the urgency for an immediate solution. Just as suspicion may creep in the best of relationships between both the sides, in the same way, proper communication can thaw the frost. Obama didn’t say anything which had not been said before. But he gave the same substance a new dressing. Willing to be persuaded, the Arabs appeared happy to buy the argument proffered by Obama, who is, in effect, adopting a strategy of riding two horses at once–an approach Iran, Saudi Arabia and other regional powers have often adopted.

Much of the morning session was about Iran’s N-deal. The leaders appeared anxious and concerned to hear the progress of the N-deal. However, the afternoon session following the lunch was relaxed and cordial. As the leaders talked informally about regional challenges in Syria, Iran and Libya, with Saudi, Emirati and Qatari leaders, bonhomie returned. The lips almost always wore a smile. According to one delegate, the mood in this afternoon session was “really, really positive. We came away with a collective spirit we didn’t have before the meeting.”

The leaders were happy that US’s commitment would not only help keep the Gulf stable but also send a message to an Iran divided between its institutions and leaders. Iran’s political elite has been divided between two: the first includes extremists swearing by expansion and domination; the second is wedded to internal reforms.

A hawk-eyed America, guarding against Iran’s penchant for pin-pricks and pledging to maintain the security of the Gulf region, would only serve the second group to push Iran towards genuine reconciliation and regional stability.

The moderate opposition in Iran is feeling the heat from the conservatives, led by President Rouhani. The reports from Iran say that the agreement has bolstered Tehran’s hawks. They are bragging that most of the nuclear programme accomplished, the West has finally capitulated, abandoning the sanctions. The US commitment will uplift the sagging spirit of the moderates.

During the N-deal negotiations, Iran’s security apparatus had tightened its noose around the domestic opposition. The recent Kurdish rebellion, around 8 million, in the city of Mahabad, northwest of Iran, was a revolt against the security forces.

The state uses cruelty as a tool against the minority populations of this multi-ethnic society. Opposition in Tehran fears that signing the nuclear agreement with the West will, contrary to Washington’s calculus, serve the interests of regime hardliners. The agreement will grant hardliners two gifts. First, lifting of economic sanctions will fill their treasury with funds to manage their proxy wars. Second, they will have a stronger status within the regime and against moderate clerics and politicians.

The struggle between moderates and hardliners within the state is obvious. The only moderate leader Iran has seen since the Islamic Revolution was Mohammad Khatami, president from 1997 until 2005. Khatami was met by an expanded war being waged by the clerics against the entire moderate movement. He was succeeded by Mahmoud Ahmadinejad, who led Iran to its current situation of more extremism and militarism. He was the pioneer behind the extension of Iran’s proxies to Iraq, Syria and Yemen.

The Iranian Revolutionary Guard has always been the iron hand screwing up the opposition. Mahabad and Baluchistan, two provinces in the southeast, are testimonies to the venom spewed. The IRG have spread their tentacles to virgin territories like Khuzestan province, home to a restive Arab population. The huge uprising after the rigged elections in 2009 is etched deep in the memory of Tehran. That fire was fuelled by reformists from within the regime.

So, both the N-deal and the US commitment at Camp David is a zero-sum game. The former has bolstered the conservatives and the latter has encouraged the moderates. In the end, both will end up neutralizing each other.

If Washington had linked the deal to conditions obliging Tehran to halt its proxy wars in the Middle East in exchange for ending international sanctions, the moderates within the theocratic regime would have been cheering.

Significantly, the UAE and Saudi Arabia put their heads together against the proxy wars waged by Iran, forcing the Rouhani regime to sing a pacifist tune early this month.