Moynihan’s ‘New Federalism’: A Lesson For The Left As They Resist Trump Presidency 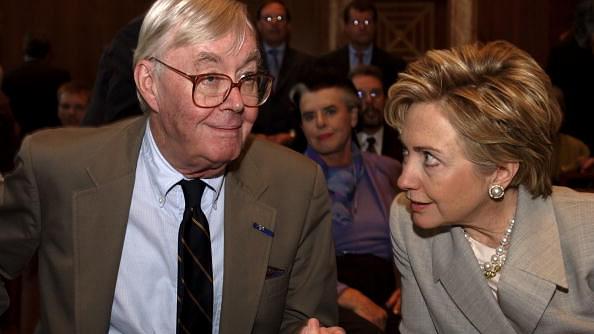 Daniel Patrick Moynihan talks with Hillary Clinton before the start of the nomination of Theresa Alvillar-Speake. (Douglas Graham/Roll Call/Getty Images)

Daniel Patrick Moynihan was a liberal who wasn’t above challenging orthodoxy, for which he occasionally found himself in trouble. His 1965 report on the decline of the black family earned him the enmity of a generation of civil rights activists. They accused him of “victim-blaming.” His 1993 American Scholar article, “Defining Deviancy Down,” which argued that American communities had come to regard formerly aberrant behaviour as normal, brought angry rejoinders from fellow New York Democrats like David Dinkins and Charles Rangel. Moynihan had another late-in-life departure from the progressive canon that was less noticed, though perhaps equally profound. A powerful and well-funded federal government, he realised, was counterproductive to liberalism’s aims. Those politicians and protesters across the country pledging “resistance” to President Trump’s agenda would do well to learn this lesson.

In the 1970s, Moynihan popularised the notion that residents of richer states such as New York contributed disproportionately to the federal budget because they paid more in federal income and business taxes than they got back in Washington aid. Moynihan regularly produced a report on the flow of funds between Washington and the states and argued for rejiggering aid formulas. Despite his efforts, however, the imbalances persisted, in part because of tax increases backed by congressional Democrats that drew more money from richer states. Republicans contributed to the problem too, Moynihan complained, with their unwillingness to cut programs and subsidies beloved by their constituencies. He was frustrated by a series of Republican presidents who used the largesse from New York and other states to fund their own policy priorities—such as defence. Moynihan feared that the federal government was “draining resources” from unwilling states, weakening them.

In 1999, near the end of his Senate career, Moynihan admitted that his efforts had been flummoxed by the complexity and nuances of how Congress funds individual programs. Rather than struggle to change congressional funding formulas, Moynihan argued that what the country needed was to shrink the federal government back to the essentials outlined by the Founders (the enumerated powers) and send money back to the states by cutting federal taxes. This “new federalism,” as Moynihan called it, would free each state to create the kind of government its citizens wanted. Progressive states could tax more and spend more on social programs; conservative states could do the opposite. Americans would be free to live in the place that best suited them. “It is time to trade,” Moynihan wrote, “less activism in Washington in return for more revenue at home, for whatever active measures recommend themselves to the state or municipality in question.” Moynihan’s ideological allies, ever intent not merely on bigger government for themselves but also for everyone else, barely noted his call.

Now, blue states find themselves engaged in another titanic struggle with a Republican president over the flow of federal funds. President Trump has threatened to cut aid to sanctuary cities, often located in states that send more money to the government than they get back. Republicans are using their control of Congress and the presidency, meanwhile, to eye reductions in favoured Democratic programs. All 14 GOP representatives from California recently asked the president to defer funding for the Golden State’s high-speed bullet train—a project heavily backed by environmentalists and mass-transit advocates. Trump is also looking at reducing funding for alternative energy sources, even while making reaganesque promises to beef up defence spending. Despite Trump’s claims that Mexico will pay for his border wall, it’s a safe bet that any funding mechanism for it—like the proposed border-adjustment tax—will soak states that voted for Hillary Clinton.

Conservatives have long argued that states should control as much of their own residents’ tax money as possible, rather than funnelling it to Washington. The Left’s failure to understand or embrace this idea speaks to its greatest political weakness: an unerring faith that a golden age of Democratic dominance—in which progressives alone dictate how the country runs—is always just around the corner. How else to explain former Senate majority leader Harry Reid’s assault on the filibuster, or President Obama’s circumvention of Congress with executive orders? Did they never imagine that Republicans might adopt the same tactics when they regained control of the Senate and the presidency?

In Moynihan’s mind, the new federalism was more than just a strategy to win additional dollars for his state. It was also an answer to his warning that the federal government had taken on more than it could handle. When the Soviet Union fell, Moynihan observed, the world became dangerous and chaotic, and Washington had its hands full reacting to “unanticipated crises.” Moynihan wrote before 9/11, but the intervening years have only confirmed his fears of Washington’s inability to deal adequately with an increasingly untidy world. All the more reason, Moynihan observed, “[T]o look to the states’ capacity to take on matters too readily consigned to the Federal government.”

Moynihan admitted that his vision, which he described as a “grand compromise” between liberals and conservatives, was unlikely to be realised. But he also knew that people can change their minds—especially when circumstances change. Could Donald Trump be the catalyst that finally turns the Left’s dream of a powerful, all-encompassing federal government into a nightmare?