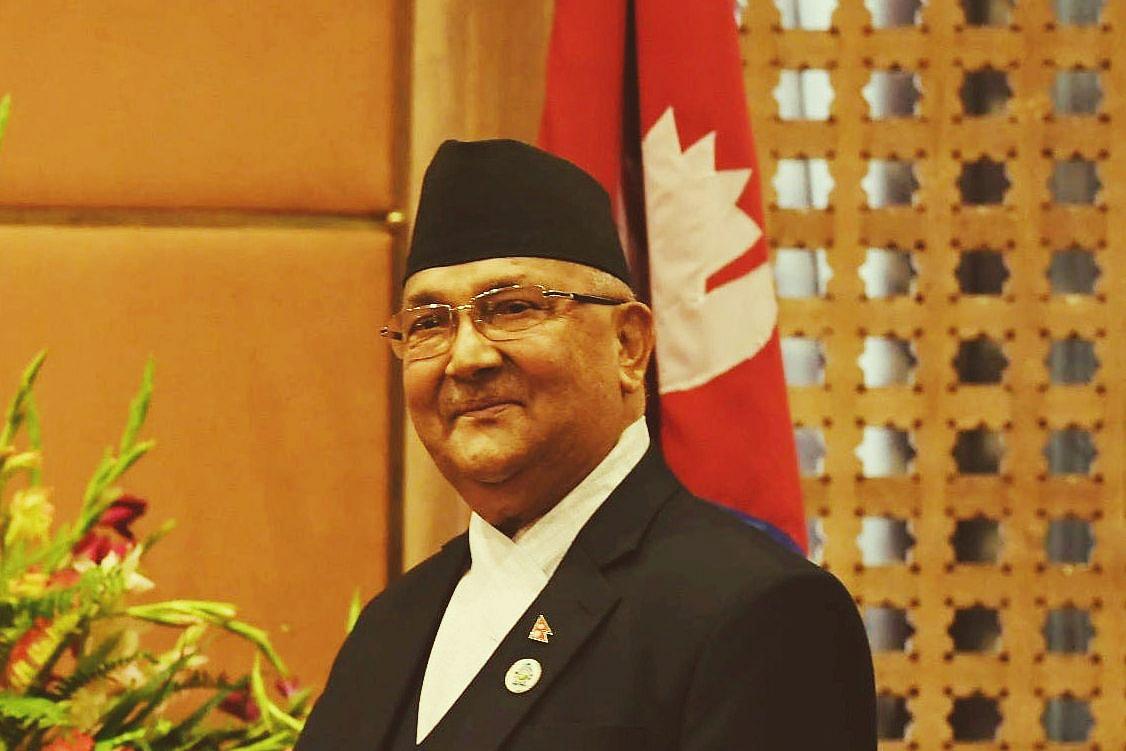 Nepal Prime Minister K.P. Sharma Oli’s use of jingoism to save himself from powerful detractors within his Nepal Communist Party (NCP) may ultimately come to nought.

The ongoing meeting of the NCP’s standing committee, which Oli had repeatedly put off till now, may result in his censure (read this). Worse still, some members of the standing committee are most likely to demand that he step down from the post of either the prime minister or the party’s co-chair in keeping with the ‘one man one post’ principle.

Oli has the support of only 13 of the 45 members of the party’s apex standing committee. The ongoing meeting of the committee got off to a combative start on Wednesday (June 24) with the party’s two co-chairs--Oli and Pushpa Kamal Dahal (aka ‘Prachanda’)--firing salvos at each other.

According to this report in The Himalayan Times, Oli in his opening remarks on Wednesday severely criticised his detractors within the party and accused them of acting like opposition leaders. Oli blamed them for people not getting to know about the “good works” being done by his government.

Dahal, on his part, openly criticised the high-handed and unilateral style of Oli’s functioning and said both the government and the party were in the midst of a crisis. He regretted his promise (made at a meeting called by Nepal President Bidya Devi Bhandari to hammer a truce between Oli and Dahal in November last year) to allow Oli to remain the prime minister for the full five year term.

Dahal also suggested that Oli has to make a “sacrifice” by choosing any one of two posts he currently occupies--that of PM and NCP co-chair. Dahal is backed by powerful NCP leaders including former PM Madhav Kumar Nepal and ex-deputy PM Bamdev Gautam.

Wednesday’s session ended after the opening remarks by Oli and Dahal, and resumed today (Friday). The standing committee meeting is expected to continue till next week. The government’s handling of the coronavirus pandemic and the border dispute with India are two important issues on the agenda.

Though Oli and his aides have been trying to win over Standing Committee members who form the bloc against him, those efforts have not yielded results. Most of the members feel that Oli has been functioning unilaterally and is sidelining them.

Oli reached out to Dahal and invited him over to his official residence at Baluwatar on Thursday. But the meeting ended in a stalemate with Dahal reportedly telling Oli that only his resignation from either of the two posts he holds will placate dissident NCP leaders.

While Dahal and the other dissident leaders would like Oli to step down from the PM’s post, it is quite likely that Oli will give up his party post if pushed to a corner. But that may earn him only a temporary reprieve since Dahal wants to become the PM.

Most NCP leaders believe that the party is getting a bad name because of Oli’s lack of governance skills, high-handedness, arrogance and unilateral way of functioning. Hence, they feel, Oli’s resignation from the PM’s post is imperative to save the party’s image.

Dahal is also learnt to have obliquely warned Oli against indulging in any misadventure. He was referring to speculation in some quarters that Oli may split the NCP and secure the support of a section of the opposition to stay on in power.

However, faced with mounting criticism and opposition, such tactics are not likely to work. The writing on the wall is that Oli will ultimately have to step down as PM.

Oli faced a serious challenge to his position in early May and it had then appeared that he would have to step down from the PM’s post. It was the intervention of Hou Yanqi, the Chinese ambassador to Nepal, which saved the day for him. Yanqi had then met Dahal, Nepal and Gautam and urged them to allow Oli to continue in office.

A grateful Oli had then done Beijing’s bidding and upped the ante with India over the border dispute. Oli also played the nationalist card to stave off opposition. “No one within the party (NCP) or the opposition could criticise Oli because to do so would have been construed as going against national sentiments that Oli had incited,” said a senior NCP leader.

The passage of the Constitutional amendment bill to change Nepal’s map (to include Lipulekh, Limpiyadhura and Kalapani that fall within India) in the country’s emblem also won him huge public support.

However, as was predicted, things changed after the bill was passed and public attention as well as the focus of the anti-Oli camp in the NCP swung back to Oli’s functioning and failures. His poor handling of the pandemic, high-handedness and lack of governance skills are once again back in public discourse.

In the final analysis, Oli’s jingoism may have saved him the PM’s chair only temporarily. Because such a card has an expiry date and is of no use after that. Khadga Prasad Sharma Oli is most likely to discover this the hard way.