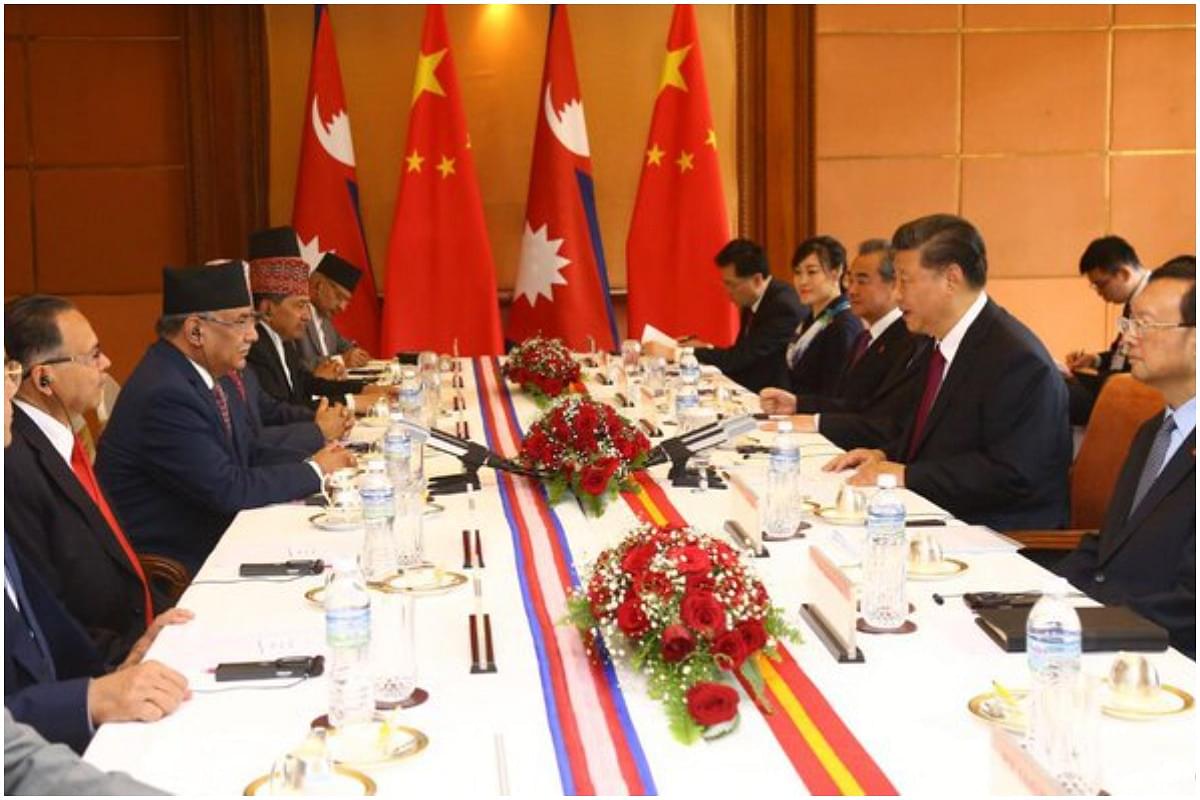 Chinese and Nepali delegations at a meeting.

The Communist Party of Nepal (Unified Marxist Leninist), or the CPN-UML, has split with the faction led by Madhav Kumar Nepal applying for registration as a new party.

The CPN-UML, which had been wracked by acute dissidence and factionalism, split following the expulsion of 14 Members of Parliament (MPs) by former Prime Minister and CPN-UML chair Khadga Prasad Sharma Oli earlier this week.

The split in the CPN-UML, which emerged as the single largest party in the 2017 federal elections by winning 121 seats, was made easy by an ordinance moved by Prime Minister Sher Bahadur Deuba and promulgated by President Bidya Devi Bhandari on Wednesday.

As per the provisions of the ordinance, any faction of a party commanding the support of 20 per cent of the party’s central committee or the parliamentary party can break away from the mother party.

The Madhav Kumar Nepal faction, which has long been at loggerheads with Oli over the latter’s autocratic style of functioning, applied to the Election Commission to register their new party as CPN-UML (Samajbadi).

This development comes after Oli suffered a severe setback when, on July 12, the Supreme Court ordered Oli to step down as the Prime Minister and appointed Sher Bahadur Deuba of the Nepali Congress to the post.

The Supreme Court order came on a clutch of petitions filed by MPs from various parties, including Oli’s own, asking the apex court to overturn President Bhandari's order, based on Oli’s recommendation, to dissolve Parliament and hold fresh elections.

Bhandari’s order dissolving the House was issued after she rejected a strong claim by Deuba to form the government. The dissolution of the House evoked widespread protests and was perceived to be grossly unfair.

The Supreme Court overturned the order and asked Deuba to conduct a floor test on July 18. The 14 MPs from the Madhav Kumar Nepal faction of the CPN-UML voted in favour of Deuba.

An enraged Oli called Nepal a traitor and has been clearing the decks for the ouster of his rivals from the party. Many efforts at reconciliation between Oli and Nepal by second-rung and even senior leaders of the party had failed.

The crisis in the CPN-UML is rivalled by another within the Communist Party of Nepal (Maoist Centre), or the CPN-MC, led by Pushpa Kamal Dahal, better known by his nom de guerre ‘Prachanda’.

There is a growing realisation within the senior ranks of the Maoist party that it is ‘becoming irrelevant’ (read this). A crucial meeting of the central committee of the party held earlier this week concluded that the CPN-MC has become no different from other “bourgeois reactionary parties” of Nepal.

Dahal, who has been leading the party for three decades, has said that the CPN-MC will lose its relevance if it does not undertake drastic reforms and reverts to its original ideological position.

Dahal is learnt to have told his fellow Maoists in the central committee: “Communist parties in the world have fallen. If we cannot be honest with our class and principles, we should rather involve ourselves in research or write books by dissolving the party”.

Lekhnath Neupane, a central committee member, told Swarajya over the phone from Kathmandu that the CPN-MC, in its present form, was like the other political parties in Nepal and offered nothing different to the people of the country.

“It was widely felt at the meeting that there is no point existing as just another political party. But our top leaders have vowed to change and reform the party before our national conference in end-January next year,” he said.

The CPN-MC wants a Presidential form of government with a Parliament elected on a proportional representation system. But all other parties are vehemently opposed to it and pushing this demand will cause ruptures in the newly-formed alliance of left and democratic forces.

This alliance, comprising the Nepali Congress, the CPN-MC, the Madhesi parties and the Madhav Nepal faction of the CPN-UML, is now in power.

Many within the CPN-MC are sceptical of charting a course independent of all other political parties since that may result in a big setback for the party in the elections due in November next year.

“A broad alliance between left and democratic forces is the need of the hour and this alliance has to be in place till the next elections. Otherwise, reactionary elements will gain the upper hand,” said another Maoist leader.

The CPN-MC is thus faced with an acute dilemma. It fears the prospect of becoming “a party indistinguishable from other parties” (in the words of Neupane) if it does not promote its original agenda. But if it does, it will get isolated and that may deplete its present strength and make it more irrelevant.

The crisis faced by the communist parties in Nepal represents a huge setback for China. It was Beijing which pushed the CPN-UML and the CPN-MC to merge and form a new party — the Nepal Communist Party (NCP) — in May 2018.

China had initiated the move to bring together the two communist parties of Nepal in order to strengthen communism in the Himalayan country from early 2017.

Many, including India, had been caught totally unaware when the two parties announced in early October 2017 that they would fight the forthcoming federal and provincial elections as allies.

But many factors, including deep ideological differences, personality clashes between the communists and hunger for power and pelf, led to the unravelling of the NCP within 31 months of its formation.

Constant bickering between Oli and Prachanda, and their incessant jockeying for power, led to deep divisions within the NCP, and the Supreme Court ultimately invalidated the NCP through an order in March this year.

Beijing had tried its best to end factionalism within the NCP and drive a rapprochement between Oli and Prachanda. Chinese envoy (to Nepal) Hou Yanqi drew a lot of flak (read this) for her many meetings with Prachanda and Oli when the crisis within the NCP peaked.

But all those efforts went up in smoke as the two communist leaders refused to bury the hatchet. And now, with the CPN-UML also splitting, Chinese efforts to strengthen communism in Nepal and thus entrench itself in that country have been dealt a huge blow.

China will, ideally, want the CPN-MC to emerge as the strongest political party in the country since the Maoists are closer to Beijing ideologically. The Maoists had carried out a bloody armed insurgency in Nepal between 1996 and 2006 that was characterised by summary executions, massacres, purges, kidnappings, human rights violations and other crimes against humanity.

The Maoist insurgency had killed over 20,000 people and displaced over one lakh people, besides causing immense sufferings to tens of thousands.

But China is well aware that the Maoists are discredited and their violent ways had left substantial sections of Nepal’s populace permanently alienated from them. Thus, it attempted unification of the CPN-MC with the mainstream communist parties.

Now that Beijing’s game plan in the Himalayan country has fallen flat, it is desperately seeking to curry favour with the Nepali Congress and the Madhesi parties to protect its interests in Nepal.

However, Beijing’s overt interference of late in preserving communist unity (the NCP) triggered resentment among other non-communist parties who viewed it as unwelcome and blatant interference in Nepal’s internal affairs.

This may hobble Beijing’s efforts in regaining its lost influence over Nepal’s politics.