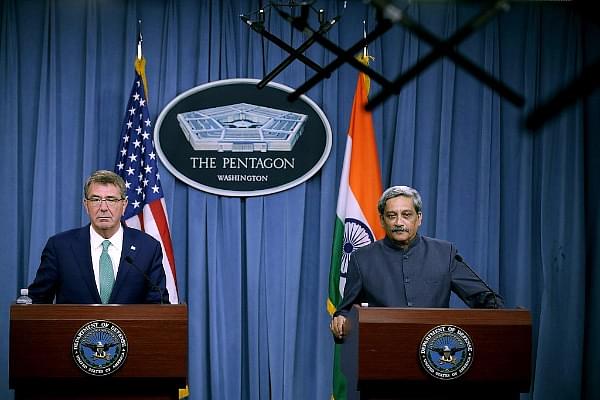 The logistics sharing arrangement signed on Monday by the United States (US) Defence Secretary Ashton Carter and Indian Defence Minister Manohar Parikkar is, in fact, quite a mundane one. All it does is provide a framework for the sharing of fuel arrangements and other low-level ‘logistics’ items between the US and Indian armed forces. Nevertheless, the agreement is a key development in the fast-improving Indo-US security ties.

India is already one of the largest importers of US military equipment. The Indian Air Force operates the largest fleet of C-17 Globemaster transport aircraft after the US forces themselves. Howitzers, especially acquired for use in mountain warfare against China, naval patrol platforms, Apache, Chinook helicopters and consultations on aircraft carriers are just some of the recent examples.

Acknowledging the deepening ties, the US recognised India as a “major defence partner” during Prime Minister Modi’s visit to Washington last June (2015). Such a designation allows India “license-free” access to many critical technologies that were thought to be restricted to the close allies of the US.

A defence technology and trade initiative (DTTI), started four years ago, helps identify the convergence between the industrial capabilities of the two countries and dovetails into the Indian government’s Make In India programme. US aerospace major Boeing, for example, has already entered into a joint venture with the Tata group to begin manufacturing helicopter fuselages in India. The company says it has doubled sourcing from India since 2014. By 2020, it will likely source four times as much as it has been doing in 2014.

The logistics agreement is second in a set of four agreements the US has been pushing India to sign. The General Security of Military Information Agreement (GSOMIA) had been signed in 2002. The Logistics Exchange Memorandum of Agreement (LEMOA) had been finalised some months ago and was signed on Monday. As for the other two agreements (one on communications security and another on geospatial intelligence), Manohar Parrikar indicated India will take its own time to “eventually go into other aspects”. India, it seems, is willing to dance but will take its own time and pace to get to the dancing floor.