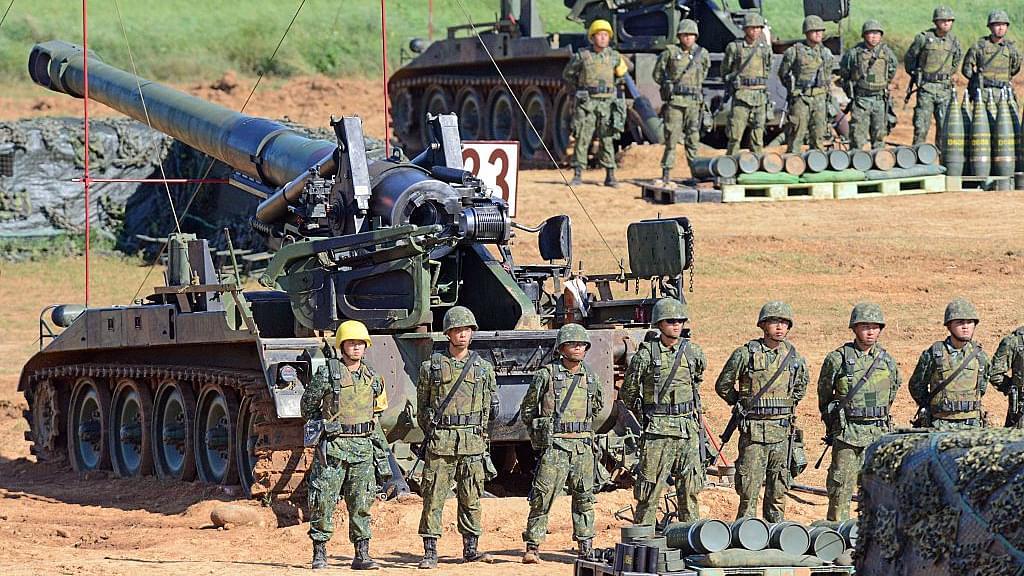 Beijing/Taipei (PTI) Beleaguered Taiwan turned belligerent on Tuesday and conducted its own military drills to counter China’s unprecedented war games around the breakaway island which entered its fifth day with no respite in sight.

Launching its own military live-fire drills, Taiwan has accused Beijing of using US House Speaker Nancy Pelosi’s visit to Taipei last week to prepare for the invasion of the self-ruled island which China claims as part of the mainland under its one-China policy.

The Taiwanese military has launched its firing target flares and artillery for several hours, Lou Woei-jye, the spokesman for Taiwan's Eighth Army Corps told the media in Taipei.

Taiwan's military said the drills would once again take place on Thursday which will include the deployment of hundreds of troops and 40 howitzers.

The Eastern Theatre Command of the Chinese People's Liberation Army (PLA) announced that it continues to organise joint combat exercises and training in the waters and airspace around Taiwan Island on August 9, with emphasis on the joint blockade and joint support operations.

Reacting to Taiwan’s military drills, Chinese Foreign Ministry spokesman Wang Wenbin told a media briefing in Beijing on Tuesday that the root cause of the current tensions across the Taiwan Strait is that the DPP (ruling Democratic Progressive Party) authorities have been colluding with foreign forces to seek independence and make provocations.

They refuse to recognise the one-China principle and attempt to change the status quo that both sides of the Taiwan Strait belong to one and the same China, he said.

“We want to make it clear to the Taiwan authorities that any attempt to go against the trend of history or to resist reunification with military force is bound to be rejected by all Chinese people and become futile. Such attempts are doomed to fail,” he said.

The PLA initially announced the unprecedented military drills in Taiwan Strait involving all arms of its military from August 4-7 but continued beyond the schedule with no end in sight.

China's official media reports said the continuation of the drills will be a new normal around Taiwan aimed at crippling the island which broke away from China in 1949 opting to be a democracy opposing the Chinese Communist Party rule.

Recent polls show an overwhelming majority of Taiwanese oppose any sort of unification with China, and a large and growing majority consider themselves 'Taiwanese' and not 'Chinese', the BBC reported.

In Taipei, the Taiwanese Foreign Minister Joseph Wu in his address to the international media on Tuesday alleged that “China has used the drills in its military play-book to prepare for the invasion of Taiwan”, using Pelosi’s visit as a pretext.

'It is conducting large-scale military exercises and missile launches, as well as cyberattacks, disinformation, and economic coercion, in an attempt to weaken public morale in Taiwan,' he said, according to the text of his remarks released by the Taiwanese Foreign Ministry.

Wu said, “China has openly declared its ownership over the Taiwan Strait” separating China and Taiwan.

“It aims to influence the international community’s freedom of navigation in the waters and airspace of the Taiwan Strait by denying the status quo that it is an international waterway,” Wu said.

On this occasion, China has also taken specific actions to break the long-standing tacit agreement on the median line of the Taiwan Strait, he said.

Using a range of its missile tests, China is clearly trying to deter other countries from interfering in its attempt to invade Taiwan, he said.

Its rehearsal of anti-access and area-denial (A2/AD) tactics gives us a clear image of China’s geostrategic ambitions beyond Taiwan, he said.

Taiwan certainly has the right to maintain relationships with other countries and to participate in and contribute to the international community, he said defending Pelosi’s visit to Taiwan, he said.

“The people of Taiwan also have the right to express their collective will through a democratic system. China has no right to interfere in or alter this,” Wu said.

He cautioned the countries in the region that China’s ambitions goes beyond Taiwan.

“Although China seems to be targeting Taiwan now, its activities around the world have shown that its motivation is far beyond Taiwan. China is now determined to link the East and South China Seas through the Taiwan Strait so that this entire area becomes its internal waters,” he said.

“And its intentions are not likely to stop there,... in May this year, China signed a security agreement with the Solomon Islands, and intended to do the same with more Pacific countries,” he said.

“China’s influence also extends into Southeast Asia, South Asia, and even Africa and Latin America. China’s behaviour towards Taiwan is merely a pretext. Its ambitions and impact is extending far beyond Taiwan. It is thus critical that all freedom-loving nations work together to explore means to respond to the expansion of authoritarianism,” he said.