The Clock Is Ticking In Syria, And Peace On The Edge In West Asia 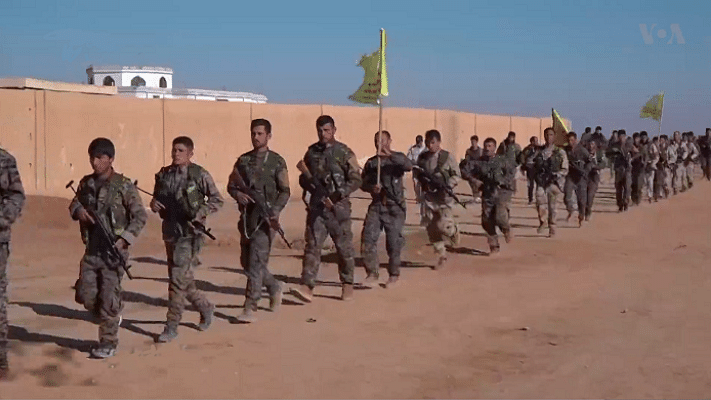 The United States shot down a Syrian government SU-22 plane over al-Tabqah region in northeastern Syria on 19 June. This prompted Moscow to suspend an agreement with allied Western forces aimed at avoiding conflict over the use of the Syrian airspace. A day later, the Americans shot down an Unmanned Aerial Vehicle (UAV) in southeast Syria – this time over al-Tanf.

After the 19 June incident, Russia has warned that it will track all US-allied planes west of Euphrates River as targets, prompting US ally Australia to suspend its airstrikes in Syria. After repeated aggressive American actions inside Syria, Russian President Vladimir Putin is under pressure both from his populace as well as allies in West Asia to stand up to American sabre rattling.

But despite repeated warnings, the US has not backed down from using force in the region. Washington knows that it cannot count on Russian altruism forever as Moscow comes under increasing pressure to act. So why has reason not forced the US government to desist from continuing its adventures which might spark a bigger conflict? There are three reasons for this.

The arrival of US President Donald Trump on the scene has been a gift for neo-conservatives in US political circles. A businessman with little political experience, he is still finding his feet in political waters. An example of his naivete was on display when he ordered a missile strike on a Syrian airbase on the pretext of a suspect ‘chemical attack’ on rebel forces by the government in April this year. President Barack Obama had showed restraint in 2013 when he was under more pressure to intervene under similar circumstances. The escalation ladder that the US climbed due to that rash decision by President Trump has widened the differences between Russia and its allies and the US. With every future incident, conflict between the two powers can only get nearer.

Secondly, the US has been finding it tough to acquire allies inside Syria who would be willing to cooperate with it against both Islamic State (IS) and Bashar al-Assad government. While it has managed to entice some militias, most have either stayed away or decided to fight against it. US military knows very well that it cannot defeat either IS or the Assad government with air power alone.

Its most powerful and reliable ally on the ground at present is the ‘Syrian Democratic Forces’, or SDF. Comprised mainly of Kurdish forces, SDF is sprinkled with some Sunni Arabs opposed to Assad. When Turkey had launched a military incursion (Operation Euphrates Shield) into northern Syria last year with the aim of cutting off the Kurds into two parts, both Russia and the US intervened to protect the Kurds from Turks. Both the powers were willing to help the Kurds, but Russia also wanted them to cooperate with its ally, the Assad government. Independent-minded Kurds chose American patronage instead. The Kurds have also agreed to help the US liberate Raqqa (de facto capital of IS) in the hope of American support for Kurdish independence from Syrian rule. Now when SDF is actively moving towards Raqqa, Americans feel responsible to help it against IS as well as provide it aerial protection from government forces. Any lack of support might drive the Kurds into the willing arms of Russia, which would lead to US losing its last major ally in Syria. This could prove disastrous in the post-IS period when the US intends to continue having a destabilising influence against the Assad government.

SDF’s foray into Arab lands controlled by the Syrian government to reach Raqqa has led to clashes between the two. When the Syrian plane was called to support its ground troops, Americans had to shoot it down. This 19 June shooting down of the plane was the first by American fighters since 1999 and has led to a grave situation in the region.

The responsibility for unravelling the entire region rests on the shoulders of the Bush regime, which launched its unnecessary 2003 war against Iraq. That war has led to the rise of sectarian and ethnic conflicts in both Iraq and Syria. It was disastrous not only for the people of the region but also for American allies. Paving of democracy in Iraq has given power to the Shias who comprise 65 per cent of Iraqi population. Not foreseen by short-sighted American neoconservatives, the Iraqi government has since moved closer to its Shia ally Iran and against American Sunni allies in the region and Israel. This has complicated the geopolitical situation in the region.

As long as Saddam Hussein or the Sunnis were in control of Iraq, Iran was cut off from Syria. The defeat of IS, which is inevitable in both Syria and Iraq, will now give the Shias territorial control from Tehran to Damascus. This might end up creating a homogenous Shiite territory in the vast region. It is a nightmarish scenario for Israel which has hostile relations with Iran.

Israel has already fought a war with Shiite Lebanese militia Hezbollah in 2006. In that war, Hezbollah fired around 4,000 rockets into Israel causing as many as 49 casualties. Hezbollah also fired an advanced ‘shore to ship’ missile damaging a frontline Israeli naval ship INS Hanit, leading to the death of four sailors. Israel contends that Hezbollah received these weapons from Iran. Tel Aviv has since pursued a pro-active policy of denying Hezbollah these weapons by attacking and destroying them when they are in transit or storage. To achieve this, Israeli Air Force regularly launches airstrikes in Syria or Lebanon.

If and when IS falls, and the borders between Iraq and Syria come under the control of Assad government, it will be much easier for Tehran to transfer weapons by road into Syria and Lebanon. This is an unacceptable situation for Israel which has repeatedly emphasised that this will constitute a clear red line for Tel Aviv and might draw military intervention. The US, an Israeli ally, has been called upon to prevent such a development.

At present, the border crossing between Iraq and Syria at al-Tanf is controlled by the US and its allied Sunni Arab militia. The other border crossing near Deir ez-Zor is controlled by IS. The US has set up a military base at al-Tanf and has declared a self-designated `deconfliction’ zone around its base stretching to 40km in all directions. This, it claims, is to protect its base from hostile forces. Russia has worked with the US to ensure there is no fighting around the base. Despite this, US forces zealously guard the base and have twice shot down Syrian UAVs entering the ‘deconfliction’ zone. They have also attacked a Syrian ground force, which they claim entered the forbidden zone, causing casualties.

For the predominant Shiite power Iran, the existence of US forces in between two Shia dominated regions is intolerable. Shiite militias have repeatedly massed around al-Tanf and have only been dissuaded from taking to violence by Moscow. As to how long the Russians can hold back these militias is anybody’s guess. On the other hand, increasing Iranian strength and influence in the region has also alarmed the Gulf monarchies. Turkey also views increase in Iranian influence as detrimental to its interests in northern Iraq.

Moscow has moved in heavy military equipment in Syria which is capable of tracking and shooting down all planes over the Syrian airspace. But the Russian government has been ready and willing to cooperate with other powers in the region. Despite reservations by its Shiite allies, Russia has not vehemently opposed Israeli airstrikes in Syria. President Putin also swallowed his pride when a Turkish F-16 shot down a Russian Su-24 in November 2015. Russian forces did not retaliate. But the clock is ticking in Syria and any incident in the near-term could end Russian patience.

The recklessness of President Trump, the existence of various militias in the region and the geopolitical interests of the players have placed the situation on a tinderbox in West Asia. The recent aggressive actions by the US have only taken the situation in a more dangerous territory. Any Russian or Iranian retaliation to repeated American ‘provocations’ could lead to a wider conflict. Although the defeat of IS seems inevitable and is perhaps only a matter of time before it happens, West Asia is decades away from any lasting peace returning to the region.