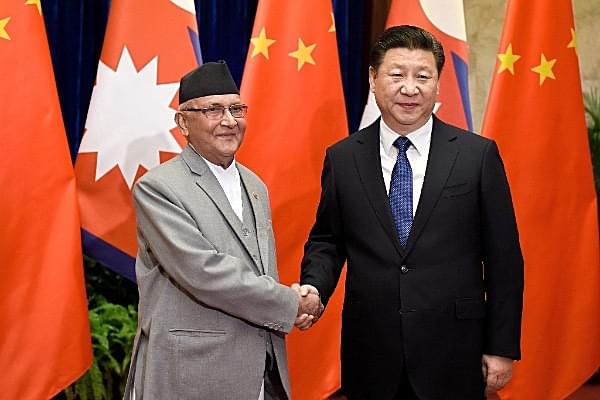 Nepal’s Prime Minister Khadga Prasad Sharma Oli’s remark at a function in the middle of last month that the real Ayodhya is in Nepal and Bhagwan Ram was born in Nepal, and his repetition of this claim earlier this week, was not a casual claim born out of his antipathy towards India.

It was, say analysts, a deliberate and well-thought-out remark. And it was part of a gameplan to rupture the age-old civilisational ties that exist between the people of Nepal and India.

China, along with Pakistan, are part of this complex plot.

The objective is to slowly wean Nepal away from India’s sphere of influence and make it an inalienable part of a Pakistan-Nepal-China axis that will emerge as a permanent headache for India.

Nepal’s Communist rulers are active and enthusiastic players in this conspiracy whose fulcrum is to alter the overwhelmingly Hindu character of the Himalayan country.

Nepal was the world’s only Hindu state till it was declared a secular republic under an interim Constitution that abolished the monarchy in January 2007.

Since then, Christian missionaries and NGOs from Western nations and even South Korea, and Islamist preachers acting at the behest of Pakistan, have had a free run in the country.

Millions of impoverished Nepalese have been converted through allurements, social and political pressure and even threats (read this and this).

Nepal’s Communists have not only turned a blind eye to the evangelist activities of the Christian missionaries in the country, but are also believed to be actively encouraging them to proselytise.

As a result, Nepal’s Christian population is increasing by leaps and bounds. Demographic experts say that the 2011 census grossly underreported the number of Christians at a little over 2.75 lakh (over one percent of the country’s population). The number could actually be as high as nearly two percent of Nepal’s population now.

Christianity is growing fast in Nepal. Also, though the country’s census puts Hindus at 81.34 per cent of the population of Nepal, this number is deceptive.

That’s because a significant number of these Hindus are active members of the Communist parties and, hence, are atheists or non-practising Hindus. As such, they cannot be counted among Hindus.

In fact, like their counterparts in India, Nepal’s Communists harbour a deep antipathy towards Hindus.

Christian missionaries have been trying to carry out conversions in Nepal ever since the Capuchins forayed into that country in 1715. They attempted to convert the king of Bhaktapur, but failed. When Gorkha ruler Prithvi Narayan Shah conquered the Kathmandu Valley and unified Nepal in 1769, he expelled all the missionaries from the kingdom.

After that expulsion, Nepal remained free of Christian missionaries for the next two centuries.

Some Nepali-speaking citizens of India who had been converted to Christianity did attempt to enter Nepal surreptitiously and carry out conversions, but the country’s monarchs firmly curbed such activities.

It was only in 1951 after King Tribhuvan opened his country to the world and appealed to the global community for help in Nepal’s development that Christian missionaries smelt an opportunity.

The missionaries responded to the call and, in the name of setting up humanitarian and aid missions, started proselytising economically and socially disadvantaged Nepalis with their infamous ‘evangelical’ zeal.

The Protestant missionaries in Nepal quickly organised themselves into a United Mission to Nepal (UMN) in 1954 to coordinate their proselytising. Under the cover of running medical clinics, schools and educational institutions, rural development and other such works, the missionaries started converting the beneficiaries of their interventions to Christianity silently.

The Western missionaries Nepali-speaking Indians who had converted to Christianity to establish missions in Nepal and proselytise, mainly through fake faith-healing and exorcism camps.

There has been a huge spurt in conversions over the last five years since the 2015 earthquake that devastated Nepal. Under the cover of relief and rehabilitation, Christian missionaries have been converting the poor and socially backward segments of Nepal’s populace through various allurements.

Nepal, however, has laws banning proselytising. But the missionaries flout such laws, often with the active encouragement of the Communists there.

Nepal’s new constitution provides “protection to religion and culture being practised from ancient times” and prohibits “disturbing the religious beliefs” of people. Nepal’s Parliament passed a law in 2017 that prohibits hurting religious sentiments and “undermining the faith that any community has been practising since eternal times”.

Though these laws were passed mainly due to the pressure from Nepal’s Hindus, they have been seldom enforced. The Communist rulers have, in fact, frowned on enforcement of these laws and have punished officials who have attempted to prosecute the proselytisers.

The effect of conversions

The missionaries, in their zeal to convert, mock Hinduism and paint the religion as regressive, socially divisive, discriminatory and steeped in superstition. This portrayal finds resonance among many gullible, simple village folks who are usually socially and economically disadvantaged.

The constant vilification of the upper caste Hindu, who may be marginally better off than the lower castes that the proselytisers target, strikes a chord among the lower castes who had been at the receiving end of upper caste discrimination and other social evils for a long time.

This propaganda breeds a deep hatred for Hindus in the minds of the new converts. Also, since India is associated with Hinduism, the antipathy towards Hindus and Hinduism easily translates into anti-Indianism.

Sociologists in Nepal say that the converts’ primary allegiance is to the church, not the nation. While that in itself bodes ill for Nepal, the concern for India is that many of these converts to Christianity start harbouring deep anti-India sentiments.

Nepal has witnessed an alarming rise in Islamic fundamentalism fuelled by Pakistan, and in Wahhabi preachers and clerics funded by the Gulf nations in recent years.

While the Kathmandu Valley has witnessed a surge in migration of Kashmiri Muslims, the Terai region (foothills bordering India) has become a happy playground for Islamic radicals.

The Kashmiri Muslim migrants to Nepal harbour deep anti-India and pro-Pakistani sentiments. Islamists in the Indian States of Uttar Pradesh and Bihar that border Nepal have been radicalising Nepali Muslims living in the Terai belt.

A huge number of Wahhabi seminaries, madrasahs and mosques have come up in the vast expanse of Nepal’s Terai (or Madhes) over the past decade and are spreading the extremist, Salafi form of Islam.

“This radicalisation of Nepal’s Muslims also translates into rising anti-India sentiments among them. India is portrayed as a ‘Hindu rashtra’ where Muslims are persecuted and killed. A large number of Nepali Muslims have thus been brainwashed into becoming anti-Indian,” said a Nepal-watcher in India’s Ministry of External Affairs (MEA).

Muslims constitute about 4.5 per cent of Nepal’s population now, but their numbers are rising fast. It is estimated that by 2030, Muslims will form at least seven percent of the country’s population.

Beijing’s gameplan is to use its Communist lackeys in Nepal to drive a schism between Nepalis and Indians by rupturing the deep-rooted civilisational ties between the two countries.

These civilisational ties are essentially based on the shared heritage of Hinduism and Buddhism between the people of the two countries. Nepal’s Communists, ever since they gained critical political mass, have been trying to question and rupture this heritage.

As Communists, they ought to have no interest in religion. But the very fact that they so strongly advocate their positions on matters of Buddhism and Hinduism reveals their designs.

For many years now, Nepal’s Communists have been driving home the point that Gautam Buddha was born in Lumbini which is in Nepal. And hence, Nepal has the rightful claim to the ‘land of Buddhism’ tag.

The articulation of this claim started sometime in the middle of the last decade and was done primarily by the Communists before other parties also joined in for political reasons.

India has been indulgent towards this claim and has always acknowledged that Buddha was, indeed, born in Nepal.

It is a different matter that Buddha attained enlightenment in Bodh Gaya, gave his first sermon at Sarnath and attained parinirvana in Kushinagar, which are all in India. And after attaining enlightenment, he spent his entire life in Bharatvarsh.

The recent and needless controversy kicked up by Kathmandu over India’s foreign minister S. Jaishankar’s innocuous remarks about Buddha provides yet another evidence of the Communists’ gameplan.

“It is all aimed at fracturing the age-old ties between the people of the two countries. Nepal’s Communists have been very consistently trying to do this over the past two decades in subtle and not-so-subtle ways,” said the MEA official.

This is also why Nepal’s ‘godless’ Communists tried to expel Indian-origin priests from the most revered Pashupatinath Mandir in 2009 (read this and this) before backtracking under tremendous pressure.

Not deterred by that setback, the Communists made another attempt two years later. That, too, was foiled.

The abolition of the monarchy in Nepal was also part of this gameplan. Nepal’s monarchs had very close ties with Yogi Goraknath, founder of the Nath monastic movement and the famed Gorakhnath Math.

The Communists have been whipping up nationalism, bordering on jingoism, in Nepal. Prime Minister Oli’s many jingoistic moves (read this) are all aimed at whipping up passions against India.

The ultimate objective behind this elaborate gameplan is to create an Islamabad-Kathmandu-Beijing axis that will be ranged as an effective containment measure against India.

New Delhi has to guard against this axis being cemented and counter the nefarious motives of Nepal’s Communists very deftly. That represents a real challenge for India.