Trump-Biden Round One: The Defender Was Too Blunt For His Own Good; The Challenger Characteristically Fluffy 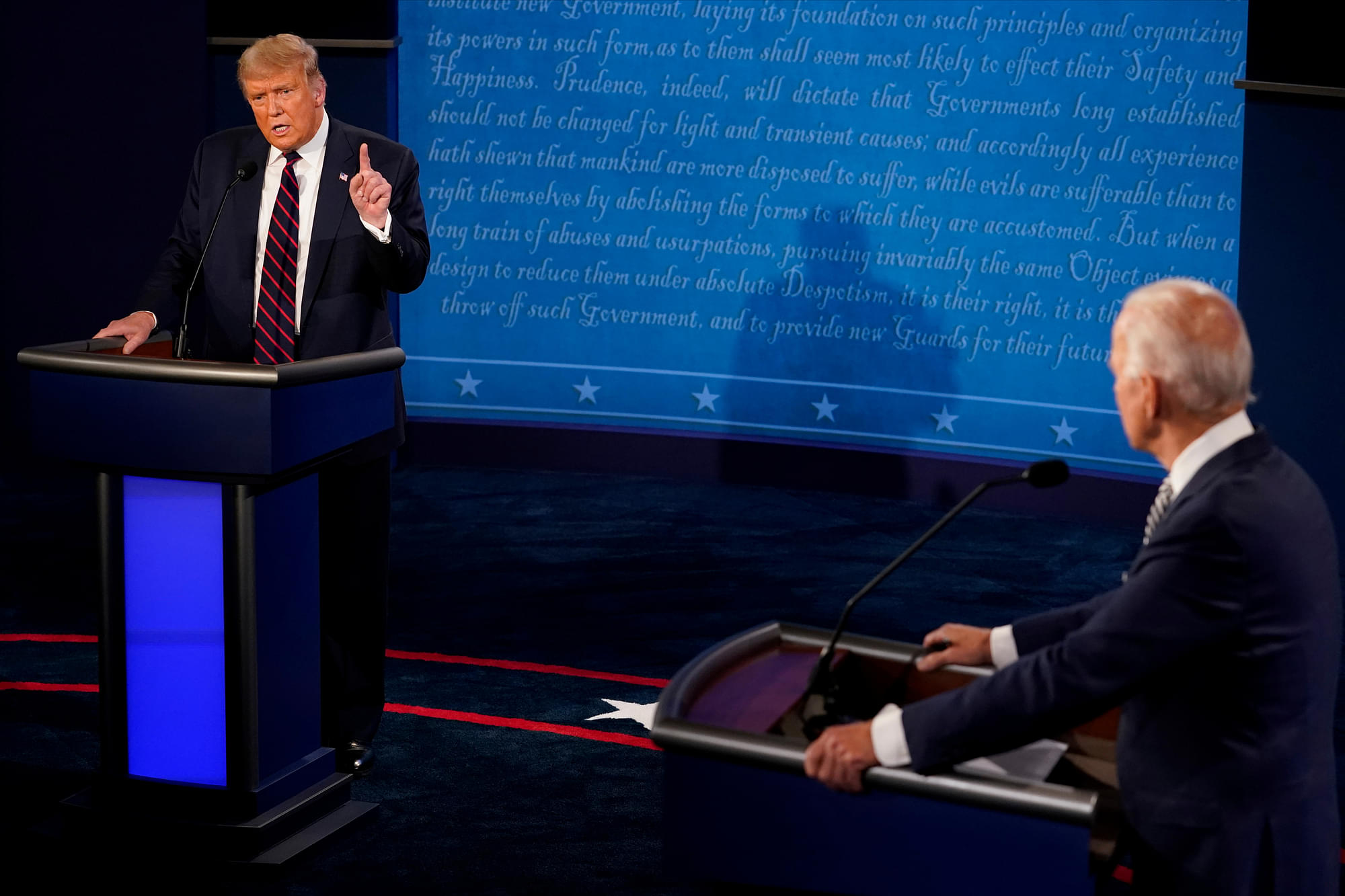 US President Donald Trump and his Democratic rival Joe Biden during the first presidential debate.

It was a rambunctious, intemperate affair, spanning 90 minutes of cheap barbs, name-calling, rude interruptions and almost constant bickering between the two opponents. If this is America, then it needs to grown up — fast!

And yet, America’s choice of one of these two men has significant implications on global dynamics, exactly when the world is poised to enter a period of uncertainty and turbulence — both on the socio-economic and politico-military fronts.

So it is important that we assess the debate, and sift the wheat from the chaff, to try and understand what sort of president India will have to deal with in the next four years.

Trump came across as Trump — a hardnosed bulldozer, who will not suffer liberal fools gladly, speaks his mind too bluntly for his own good, and believes that the Democrats are pushing America towards a dangerous, postmodernist, neo-Marxist nightmare, and reduced global relevance.

Biden came across as a churlish contender, who openly advocates identity politics while wanting to have the white cake and eat it too, seeks to create a massive, unaffordable welfare state, and places fluffy rhetoric over specifics, as he enthusiastically shifts from position to position in a dance, which would have put even the great Fred Astaire to shame.

And while the debate was too noisome to be distilled into anything more than a messy, patchwork quilt of odious takeaways, some of the exchanges between the two men do offer us useful insights, about their plans and their motivations.

The first major ideological cleft between the Republicans and the Democrats manifested itself, when the moderator brought up the burning issue of race and identity.

In an America ripped apart by rampaging mobs of looters and arsonists, who vandalise public property and openly plunder designer stores of costly goods, all in the name of social justice, this was very much the topic of the season.

Why, the moderator asked, did Trump shut down programmes that taught law enforcement agencies to be more racially sensitive?

The President’s answer was characteristically blunt: because the underlying theories of these programmes were formulated upon critical race theory (CRT). These were lunatic ideas, based on the absurd premise that a white man was by default a racist, and wrapped in a senseless cocoon of postmodernism (a European ideology which subscribes to illogical moral relativism and the subjectivity of truth, and is the formal basis of both modern neo-Marxism and Liberalism). America didn’t need it.

Even as Biden started to interject and castigate Trump’s position, the moderator deftly defused the situation by asking Biden what his views on the subject were.

What did Biden mean exactly, by his proposal for ‘reimagining policing’? The Democratic Party candidate’s answer was startling: he said that he expected a civilian psychologist to accompany police officers into a crisis situation, with the executive authority to decide whether an officer might employ force or not to bring the matter under control.

Leave aside the administrative impracticalities of such an outrageous thought; the notion that the independent, decision-making powers of a trained, experienced police officer was to be outsourced to someone with no policing experience or training, actually triggers an Indian analogy.

A rank outsider having magisterial control of a dangerous operation is like an Arundhati Roy, or a Varavara Rao, leading a crack CRPF team into a Maoist den in Bastar; or a ‘Bollywoodiya’ ‘peddy’ starlet leading a Narcotics Bureau drug bust in Bandra.

As Biden grew angrier, Trump shot back as only he can: “You can’t even say ‘law enforcement’, because if you do, you’ll lose all your radical left supporters”.

Biden’s blinding ferocity at such a suggestion, that anyone other than him or his Democrats could ever be the saviours of Black Americans, was telling. It nearly turned ugly until Trump shot back again: “You’re the one who called Blacks ‘super-predators’, in 1994!”

And that established the tone and tenor of the first presidential debate, with Trump speaking his mind on deluded Leftist machinations to a Socialist (a very bad word in America), and Biden trying to be aggressively-politically correct to a privileged white male (code, or a dog whistle, for ‘racist’).

Apparently, Biden’s own skin colour was either translucent, indeterminate, or, being Democrat, irrelevant.

This race-identity slugfest became a recurring theme of the presidential debate.

In India, we would call it just another desi argument over vote bank politics, but America is still far behind us on that learning curve, so for flavour, those who missed the debate need only imagine an effervescent Sambit Patra-Rajdeep Sardesai exchange in a nasal Yank twang, or a Rubika Liyaqat-Swara Bhaskar one, on minority victimhood, appeasement, and vote shares.

Then came the question of the debate. Perhaps tired of Biden’s moralising, over the racially-tinged violence surrounding the anarchist Antifa and militant Black Lives Matter movements, in Democrat-controlled cities like Seattle, Chicago and Portland, the beleaguered moderator asked the Democrat candidate if he had ever called for the Mayor of Portland, or the Governor of Oregon – both Democrats – to end these violent protests. Biden’s answer was chillingly supercilious: how could he, when he held no public office?

This pious dodge boomeranged instantly and pretty much lost Biden the debate. One: how was it that he could hold an opinion on every topic under the sun without holding office, but not on the one topic where the active involvement of his party in instigating violence was alleged?

And two, that gave Trump an opening he barrelled into without delay. The Democrats, Trump alleged, were keeping racial tensions simmering on purpose, by refusing to call in the National Guard, for electoral reasons. If it was up to him, Trump would send in the National Guard, and the problems in these Democrat-controlled cities would be over in half an hour.

Biden’s tepid response, believe it or not, was to try and argue that Antifa was an idea and not an organisation.

Another large part of the debate was taken up by the Covid-19 pandemic, and its impact on America. But here, again, the discourse veered quickly from the national to the personal, with Biden having to take much of the heat.

Like in India, health is a state matter in America; and yet, Biden sought to absolve his own Democrat governors in badly-hit states like New York and California, to pin the blame of the health debacle on Trump.

The President’s response was lethal: we were misled because China lied, but no one was going to get a word against China out of Biden, because his son Hunter had been favoured by Beijing.

According to Trump, Hunter Biden was dishonorably discharged from the army for cocaine use, and he didn’t have a proper job until Biden became vice-president under Barack Obama. Since then, Biden Jr had somehow amassed a fortune from China, Ukraine and Moscow.

Whatever the gory details, it is clear that Biden’s son is a liability, whose defence might cost the Democrats the White House.

Added to that, an inability to admit, that China caused a great deal of global harm by not publicising the actual situation in Wuhan, is an unforgiveable lapse by Biden.

No doubt, his team will try and make up for it in the next two debates, by making Biden seem stronger on China, but it will be too little too late. Putr-moh, shady deals, favouritism; it sounds so Indian, especially the inability to blame China. So similar to Rahul Gandhi echoing China’s Global Times, about our troops being underprepared on the border. Perception is everything.

The rest of the debate was more of the same, as Trump walked over Biden. This is in spite of Biden calling Trump a clown, ‘Putin’s puppy’, and asking him to ‘Shut up, man’.

On the environment, and specifically on the bushfires raging in California, Trump believed that the core of the problem lay in poor forest management by the states; they needed to learn from Europe.

Biden’s views on the environment, on the other hand, ran along the lines of: “Trump is wrong, I am right, I have a plan, but I won’t give you the calculations, the details, or the cost estimates, until you make me President”.

On the question of the judiciary, and ongoing efforts by the Democrats to stall Trump’s latest nominee to the Supreme Court, Trump again had the last laugh.

Obama, he said, left 128 judicial vacancies when demitting office — an inexcusable oversight in a country where the nomination of judges is sometimes more politically relevant than a party’s numbers in the Congress or the Senate.

So thank you, because Trump now had 300 judicial appointments to his credit; and with a hint of a smile, he asked indirectly, if this was the sort of incompetents Americans wanted running their country.

Having said that, Trump continues to appear possessed by a bunker mentality; he is quick to take offence, and responds strongly to criticism. Maybe that has something to do with the poor quality of American political discourse today. If we recollect, Narendra Modi too, was touched by this marginally, but he managed to shrug it off after the surgical strikes of 2016.

After that, he stopped caring about what the Left said. It is this writer’s belief that Trump may do the same if he wins in November; it will be his Uri moment, after which he moves away from the puffery of mainstream media.

Maybe the Democrats know that too, and hence their desperation. But their cause is not served by the likes of Biden, and his fatal inability to get to specifics.

Nonetheless, there are two more presidential debates to go before the American people make up their mind.

Let us see how those play out before finally forecasting an electoral outcome.

Either way, this much is sure: no matter who makes the bigger splash in the forthcoming debates, both are guaranteed to be vitriolic, undignified affairs.