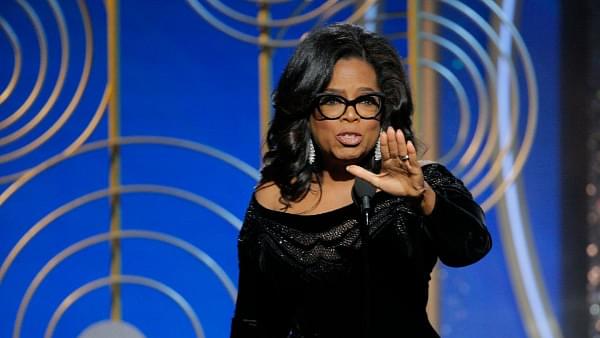 Oprah Winfrey accepts the 2018 Cecil B DeMille Award and speaks onstage during the 75th Annual Golden Globe Awards at The Beverly Hilton Hotel on 7 January 2018 in Beverly Hills, California.

“A new day is on the horizon!”

As Oprah Winfrey landed that climactic line with a fist pump and a standing ovation, I began to picture crowds at campaign rallies across the country repeating it with her, like a new and less obnoxious “Make America Great Again”.

At the Golden Globes Sunday night (7 January), Oprah accepted the Cecil B DeMille Award with a speech that had host Seth Myers, a number of prominent celebrities and pundits, the official Twitter account of NBC, and even several members of Oprah’s own inner circle floating the idea of a 2020 presidential run for the revered actress and television host. The woman behind “EVERYBODY GETS A CAR” now joins the men behind “Imma let you finish” and “Can you smell what The Rock is cooking”on the list of celebrities now publicly considering running to unseat Donald Trump.

Trump’s own candidacy was once considered at best a publicity stunt and at worst an act of egotistical self-delusion. But somehow he won, and I’m not sure we’ll ever be able to put that genie back in the bottle. As blogger Matt Walsh observed, “every argument against [an Oprah presidency]—she’s just a celebrity, no experience, etc.—has already been rejected by Republicans in order to elect Trump.” And honestly, she’d be better than meatheads like Kanye West and The Rock.

If the celebritisation of our politics is here to stay, we would do well to explore how we got here. My theory is that celebrity politicians are a direct result of the lack of apolitical state recognition in American society. Sure, there’s the Presidential Medal of Freedom (which Oprah was awarded in 2014), but that honour seems like more of an afterthought than the culturally integrated institutions of British knighthood, nobility, and monarchy. There’s no title attached to the Presidential Medal of Freedom, so when we see someone, like Oprah, Trump, or Ben Carson (a 2008 recipient of the Medal) who has contributed to our society and has a vision for its future, we feel the need to grant them one. Section 1, Article 9, Clause 8 of the United States Constitution prohibits us from calling them “Sir” or “Lady,” leaving “Congressman,” “Senator,” and “President” as our only options.

In a recent article on the state of the international monarchist movement, the New York Times summarised the arguments for monarchy thus: “royal families act as a unifying force and a powerful symbol; monarchies rise above politics.” In America, nothing rises above politics, not anymore.

According to a recent Gallup poll, Americans are most likely to name Barack Obama and Hillary Clinton as the man and woman they admire most out of anyone currently living anywhere in the world. The runners-up were Donald Trump and Michelle Obama, rounding out the list with two more political figures. In contrast, a worldwide version of the poll conducted by YouGov produced very different results. The most admired man on earth, according to their survey of 31,000 individuals in 30 countries, is Bill Gates, while Angelina Jolie and Queen Elizabeth II hold the top two spots for women. The organisation concluded that “it’s safe to say the global public values humanitarianism over politics”.

In America, we have no significant apolitical state institutions. Everything is political, so, as the shared cultural values that united us for over 200 years begin to deteriorate, politics becomes everything: humanitarianism, culture, even religion. Our head of state is also our head of government and, as Gary S Smith of The Center for Vision and Values has argued, in some sense our high priest. If Trump and Oprah face each other on the 2020 debate stage, we will see a clash between two rival American political churches. Donald Trump professes the “power of positive thinking” prosperity gospel and the jingoistic civic religion that insists on reciting the creed of “Merry Christmas” and makes standing for the pledge more important than kneeling in repentance. On the other side, Ross Douthat has correctly identified Oprah as “the pope of American gnosticism,” and Rod Dreher here at TAC has dubbed her “the Pallas Athena of Moralistic Therapeutic Deism,” which is highly averse to the idea of sin and judgment, but relies on a vague concept of God to provide comfort and sustain sentimental morality.

If the 2020 election is between Donald Trump and Oprah Winfrey, it will mark the moment when every aspect of American life was subsumed by politics. If we are to avoid such a reckoning, we will need something beyond politics to unite us. Acts of supposedly apolitical patriotism like respecting the flag and standing for the pledge have become increasingly politicised. Most of us still support the troops, but if the only thing holding our country together is war, then God help us. Elizabeth II is the second most admired woman in the world because she embodies a British identity, a Christian faith, and a set of ideals that transcend politics. I’m not saying we need an American monarchy to fix our problem—I’m not not saying it either since, after all, everybody’s a monarchist for a few weeks after finishing The Crown—but unless we invent or rediscover some way to depoliticise the people and values we esteem, we can expect to see many more celebrities on the debate stage.

Grayson Quay is a freelance writer and MA student at Georgetown University.