Trump’s G-11 Proposal: What China Could Lose, What India Could Gain 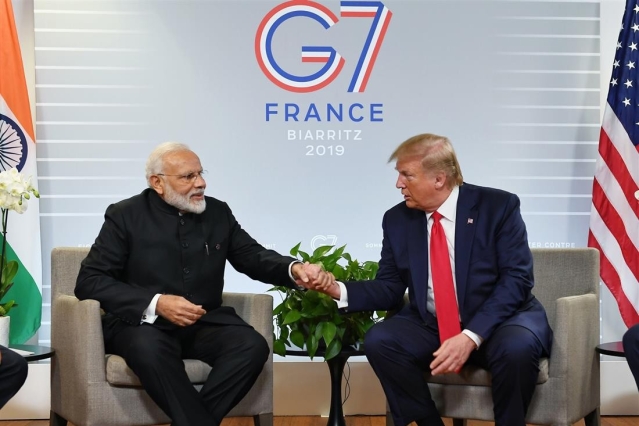 Starting with the scattered nationwide rioting and looting in the name of protests against the killing of George Floyd, an African-American man, by a policeman, to his Twitter spat with Twitter itself on fact-checking where the latter did go overboard in its righteousness, the president has been on a constant battle-mode while the total number of Covid-19 cases in America edges towards 2 million.

On Friday (29 May), Trump announced that he was terminating the country’s relationship with the World Health Organisation (WHO), and would have his administration redirect the funds meant for the WHO to other global health projects.

In April, the Trump administration had temporarily suspended funding to the WHO, stating the latter’s inability to share timely information about the coronavirus outbreak and calling it China-centric.

Continuing with his anti-China rhetoric, Trump announced that he was looking to expand the G-7 to include Russia (which was disinvited in 2014 and announced its permanent withdrawal in 2017), Australia, South Korea, and India.

Calling the current G-7 setup outdated, Trump stressed on having other Covid-19 ravaged democracies to further strengthen the alliance against China. The newly formulated G-11 is expected to meet later this year.

Trump’s actions against China have only grown in the past few weeks. While the two nations had concluded the first phase of the trade deal, the last few weeks have raised questions about its implementation.

In May, the administration issued a new rule that barred Huawei from accessing American technology and software, thus threatening the global supply chains for semiconductors, integral to Huawei.

As things stand today, the upcoming US presidential election where Trump shall seek a final term will be fought on the anti-China narrative. From bringing supply chains and jobs back to the US to avenging the virus outbreak by economic sanctions, Trump would look to cement his position as the leader of the free world against a dictatorial China.

Factoring the elections and the virus outbreak, what could an expanded G-7 mean for Trump’s anti-China stance in the short and long run, and does India stand to gain from the emergence of a bipolar world?

Firstly, an expanded G-7 or a newly formulated G-11 could warrant a rethinking on the multilateral institutions under the United Nations (UN) umbrella.

Further, China has been using its economic muscle to influence heads from countries like Kenya and more recently Ethiopia’s Tedros Adhanom Ghebreyesus, the Director-General for the WHO.

The exit of the US from the WHO could further tilt this balance, warranting an upgrade of the UN network slowly becoming obsolete.

The US government was responsible for 27 per cent of WHO’s budget for polio eradication, 19 per cent budget for tuberculosis research and treatment, HIV, malaria, and other vaccine-preventable diseases, and made for almost 25 per cent of the WHO budget for emergency health operations.

The frustration of the US has been palpable at the United Nations Security Council as well. Repeatedly, it has ignored the calls of other four members of the UNSC to make India a permanent member.

While China has backed India’s non-permanent membership to the UNSC for 2021-22, a second Trump tenure and a new G-11 could strengthen India’s permanent ascent to the UNSC.

The inclusion of other members is also critical to balance the heavy-handedness of China in the UNSC. Last week, China blocked a call from the US administration for a UNSC meeting on the issue of Hong Kong’s sovereignty. The tensions between the two superpowers have also delayed the resolution calling for a 90-day ceasefire to aid conflict plagued nations to deal with the pandemic.

For China, there is an opportunity from the US’ exit from the WHO as they would be in a position to take over ongoing health initiatives in countries of Africa, thus complementing their BRI influence and adding to their influence within in the UN. In the long run, however, this could threaten the entire UN model altogether.

Second, the emergence of an anti-China bloc in the form of G-11 could accelerate the tech-war between the GAFA-led US and BAT-led China. While the big tech in both nations shall rely on market strength and scalability to fight their battles, the point of contention shall be 5G.

The 5G war between Huawei-led China and the US has now received a fresh upthrust from the pandemic. Critical to the technologies of the future, the 5G network, with its high speed and low latency, could prove to be instrumental for many hardware and software industries.

Before the pandemic, the challenge for the US was to get its allies to discard Huawei for Ericsson and Nokia.

Huawei, with its extensive research and development, constitutes 28 per cent of the world’s telecom equipment sold. By early 2019, the company has pocketed more than 25 contracts across the world for the deployment of its 5G technology in the 2020s and 45 MoUs for trials.

While the US has voiced its concerns against Huawei, citing its closeness to the Chinese government and consequential threat to data privacy, the European nations have been averse to a complete blockade of Huawei, given the investments made by the dragon in the region. In 2019, the White House floated the idea of investing in Ericsson and Nokia to counter Huawei’s growing influence in the 5G industry.

In January 2020, the United Kingdom government had permitted a limited role for Huawei in supplying for telecom equipment for the country’s 5G mobile networks. In 2019, India has permitted Huawei to carry out 5G trials after an informal visit by President Xi Jinping to India.

Last week, the UK government ordered a review into the impact of the new White House sanctions on Huawei, given the sanctions could have implications for the development of 5G networks in Britain. Germany too is considering restrictions on Huawei for its future 5G networks, along with other European nations.

An entity like G-11 could counter the rising Chinese influence in 5G networks, drive investments in the telecom networks looking to get rid of the Huawei, and thus, lay a strong foundation for tech decoupling for future industries looking to rely less on China.

While this move could have repercussions for the tech industry in the form of increased costs and revamped investments, the support could come from the governments rigid in their anti-China stance.

Another point of contention between the proposed G-11 and China could also be the emergence of digital currency.

Already, the pilot programme for China’s digital currency, ahead of the 2022 Olympics, is underway in 4 major cities in the mainland. If the idea of a digital currency works, the Chinese government will enable an alternate global payment system, outside the purview of SWIFT, for nations of the Middle East, Russia, and other nations often hit by economic sanctions from the White House.

Further, a G-11 alliance could work on the formulation of its own network for digital currency, focusing on scalability and interoperability. However, China’s first-mover advantage in this sector would be difficult to overcome.

Lastly, for the US, strengthened economies of India, Japan, South Korea, and Russia could be an essential counter to the rise of China in Asia. In this regard, the G-11 alliance could prove to play a vital role.

For India, a place in the G-11 would only be a validation of the obvious, that of its growing stature as an emerging superpower. While India’s stressed telecom sector pushes 5G implementation ahead, the government should aid the likes of Airtel and Vodafone looking to opt for other vendors against Huawei. The alliance with the G-11 should also focus on getting more supply chains to India, especially for the companies headquartered in the US.

However, given its geographical proximity to China, the Modi government will have to ensure, from a military aspect, that it does not become a proxy ground for the Cold War between China and the US. Therefore, channels for consistent engagement between Delhi and Beijing must always remain open, for it would be unwise to risk a feud with a neighbour for friends in the West.

For China, the crisis comes with an opportunity. The proposed G-11 could alienate Huawei from European, Australian, and Indian markets. While the nations of South America and Africa may prove viable alternate destinations for Huawei in the longer run, the short-term losses will dent the company’s global prospects.

The US is already planning an ‘Economic Prosperity Network’ of like-minded nations to counter China’s BRI. Trump, in an interview recently, spoke about the US cutting off ties completely with China.

However, even with all its sanctions and alliances, the White House will not be able to reduce China’s growing clout, given its trade proximity to Australia and Russia, its massive investments in the European region, and its geopolitical relevance to India, South Korea, and Japan. For members of the proposed G-11, Trump is temporary, but China is forever, and the same thought might dictate their geopolitics in this new Cold War.

Between the US and China, the only winner here is chaos.