Turkey Is In Trouble And Its Military May Want to Help 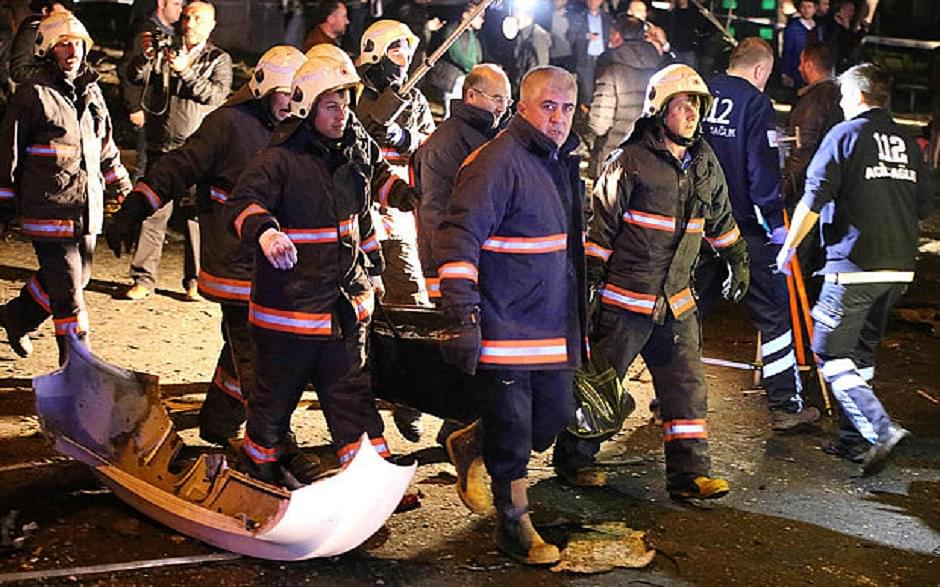 Another bomb blast in Ankara, more than two dozen dead, and the Turkish state has accused one of the Kurdish groups fighting in Syria as the perpetrator. The response in the outside world, except for the initial frenzied reportage, has been remarkably muted in terms of interest or concern. The reality is that the war in the Euphrates-Tigris basin has entered the source of these two rivers, Turkey.

We have arrived at what looks like an ongoing and year-long (so far) inflexion point for the state of President Recep Tayyip Erdogan. So we may want to look at the situation on the Euphrates-Tigris basin anew, and consider what lies ahead for Turkey, the region and the players involved.

One does not need to go too far into the detail of the happenings on the Syrian front and in Iraq. In Syria, it is a tangled cluster of warring groups acting as proxies for multiple players on the outside. These groups are acting sometimes individually, sometimes in collusion and in some cases just appearing to collude because interests converge - whether tactically or strategically.

There is no doubt that Russia has set several cats among the pigeons, and rightly so - considering that the alternative was a slow-motion victory of sorts for the ISIS. As things stand, there is no comfortable outcome possible for anyone. And it appears that at least the bigger players - the US, Russia and Europe - have come to a broad consensus that ISIS cannot be allowed to win. But that does not mean they will be left to lose comprehensively in the theatre and disappear from the scene.

If it is accepted that the above is the consensus among the current “big powers” involved in the area, then one must also conclude that the ambitions of the local powers have been curtailed or suppressed, for now at least. These ambitions include a struggle for the territory of Syria between the Sunnis and Shiites - a sectarian confrontation that already has a global overtone. Iran’s proxies like Hezbollah and others are vigorous on the ground in the area, while the radical Islamic Sunni proxies of Saudi Arabia, Qatar and Turkey - including ISIS, Jabhat Al Nusra and a virtual alphabet soup of others - are acting, sometimes in tandem, against virtually everyone else.

Over the past four years or so, none of them have been successful in overthrowing the Assad regime, the tenacity and grit of which must be giving the US and Europe pause for thought, not to mention some wistful afterthought even: why didn’t they start off by supporting him instead? The reasons are simple: advisors ignorant or uncaring of fundamentals in the area, over-dependence and political indebtedness to local “allies” Saudi Arabia and Turkey, and plain blockheaded ideological inertia carrying over from the cold war. No one expected Assad to have the kind of support on the public level that he does, no one anticipated the loyalty and cohesion of the Syrian Army, and finally no one predicted that Russia would come down so strongly on the side of the regime.

In short, no one comes out shining. And in terms of public perception, it says a lot that the seeming “honourable” figures emerging out of this imbroglio on the vaunted “Arab street” are apparently Vladimir Putin and Bashar Al Assad. That will be another headache for the Sunni regimes in the area.

Here’s the rub though: the spillover and fallout from the conflict(s) have started to establish themselves as geo-political realities in their own right, and each of the players involved are now beginning to ride those vectors. And therein lie the seeds of what can become the undoing of the NATO-Turkey compact, the US-Saudi bond, the US-EU brotherhood and, of course, the EU-Turkey relationship. In short, unless these seeds are dug up fairly immediately, and in some cases the sprouts uprooted with a sense of urgency, we are at the cusp of a paradigm shift in terms of the way the countries mentioned above look at and deal with each other.

The first signs are already in evidence. The facilitation by Turkish smugglers of the refugee influx into Europe, in the face of an apparently helpless government in Ankara, is one sign. It is clear that the refugee influx is being used as a stick by the Erdogan government to threaten the EU, and that appears to have worked judging by the latest agreement to sort the issue out. The deal permits Turkish citizens to visa-free access to the Schengen states. Some might view that as a bit of a double-edged sword.

Another sign is the way the Kurdish parties in Syria and Iraq are gaining in strength and confidence. Clearly at least some of that is the result of solid support from the US and EU, both of which regard the Turkish treatment of Kurds in Turkey and across the border in Syria and Iraq as reprehensible. However, it would not have mattered in the past, as they would have come firmly on the side of Turkey in a cinch. Now, that is not so certain.

President Erdogan has carelessly squandered decades of goodwill built up by secular governments, the last of which really were those of Turgut Ozal and Tansu Ciller. He has steadily taken the country down a route of Turkic Sunni supremacy, aligning with Wahhabi Sunni evangelism and finance - often ignoring the long-tested and slower, but surer, policies of the Kemalist establishment through much of the 20th century. Erdogan has over-reached and made many frenemies (to use a social media word) in the process. That legacy will endure for a while.

So it is not surprising that the bomb attacks on Turkey are not getting much play in the EU/US/Russia. Conspiracy theorists may say that the bombs are, indeed, a signal to Ankara to seal its borders with Syria and Iraq, both to stop ISIS and other Sunni groups using south-eastern Turkey as a staging area, and to stop refugees from flowing in. They may also see in the internal unrest a reason for the still somewhat secular Turkish military, which has been in recent years beaten down with a legal stick by the Erdogan government, to decide that the time has come to step in. If that happens, expect major criticism from the US/EU in public, but expressions of relief in private. Then it may well be the turn of Saudi Arabia.