Voting Rights Of Minorities Under Threat In America 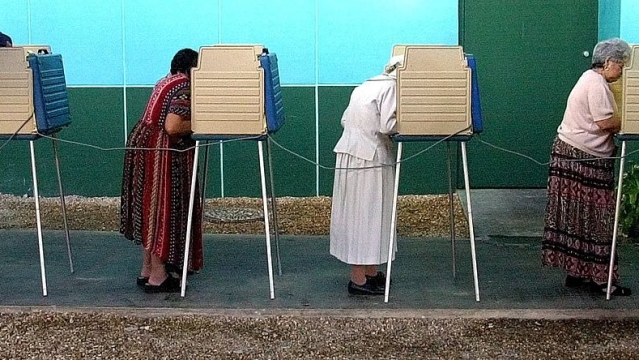 It seems the world’s self-proclaimed oldest democracy is not doing a great job in protecting the full citizenship rights of its minorities.

The Washington Post report tells us that “17 states will have voting restrictions in place for the first time in a presidential election. 11 of those states will require their residents to show a photo ID. They include swing states such as Wisconsin and states with large African American and Latino populations, such as North Carolina and Texas.”

11 States, including Georgia, Indiana, Kansas, Mississippi, Tennessee, Texas, Virginia, Wisconsin, North Carolina, have strict laws and they do not allow their residents to cast votes unless they show a government issued identity card with their photo on them.

These are mostly Republican-controlled states. Their legislators (mostly Conservatives) believe that having a strict identification in place is necessary to stop possible vote fraud.

US Democrats and liberals allege that Republican controlled states are systematically disenfranchising voters, mostly minorities. They reason that “the burden of obtaining a photo voter Id falls disproportionately” on Blacks, Latinos, old people and the poor. Besides voter fraud is not substantial enough to warrant such strict criteria.

The courts in some states have tried to strike down these laws but to no avail. State Governors have repeatedly vetoed any such attempts.

As it turns out, in Texas alone, more than 6 lakh people don’t have the form of identification required to vote, according to a federal court. In other parts of the country the figure is quite disturbing: 11 per cent of Americans risk losing their voting rights for they don’t possess government issued identification certificate such as driving license or passport.

No one explains how the strict identification process affects the voting privileges of minorities and poor better than Jeff Daniels’ character, news anchor Will McAvoy, in the TV Show The Newsroom. He highlights the plight of a poor black woman Dorothy Cooper (a real woman whose story was woven in the fictional show)

He busts the myth of voter fraud, a statistically proven non-problem, in his quintessential sarcastic manner:

Voter fraud is such a huge problem that during a five year period in the Bush Administration, when 196 million votes were cast, the number of cases of voter fraud reached 86. Not 86,000. 86. Here’s what that number looks like as a percentage of votes cast. 0.00004%. Four one hundred thousandths of a percent. This would be called a solution without a problem.

It is pretty clear that these US states are effectively disenfranchising voters belonging to poor and minority communities. They’re not doing this because of the voter fraud problem. They’re doing this just for the sake of barring them from voting.

How can the United States go around lecturing to the world on human rights with a straight face when 11 per cent of its population stands at a risk of being disenfranchised?

It’s time America stopped throwing proverbial stones at others’ glass houses and righted its own wrongs.