What Is Preventing A Modi Visit To Israel? 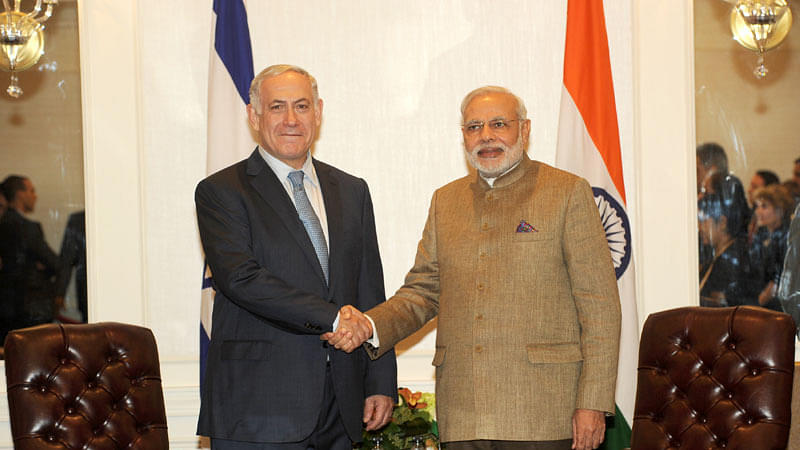 Deafening silence! This is perhaps the best way to describe the news about a prime ministerial visit to Israel. Ever since Narendra Modi assumed office in May 2014, there were periodic suggestions about him visiting the Jewish state and the latest speculation is that he would do so in 2017, which also marks the 25th anniversary of the normalisation of relations between the two countries. However, the only one person, who knows the answer, has maintained a studied silence.

Ever since Prime Minister Benjamin Netanyahu became the first world leader to call and congratulate Modi as the election results were being announced, Israel has been expecting a visit by him. There are regular media stories and political pontificating. While there are a number of high-level exchanges and engagements with Israel, Modi, who has emerged as the face of Indian diplomacy, not making it to Israel nearly three years after assuming office is highly visible.

How does one decipher the most speculated diplomatic puzzle? Is it possible to decode Modi without the benefit of authoritative sources, insider information or grapevines?

One can infer a number of possible explanations for why the visit that has not happened. One, India’s Israel policy has also been a domestic issue. Since the days of the Khilafat struggle in the 1920s, Indian nationalists viewed the Palestine question through an Islamic prism and were hence unfavourable to the idea of a Jewish national home in a territory that remained largely Islamic since the Arab conquest of Jerusalem in 637 AD. Despite accepting the communal partition in the subcontinent, Indian leaders were slow in recognising a similar situation in Palestine. While the recognition of Israel was communicated on 17 September 1950, incidentally the day Modi was born, India was not ready for full diplomatic relations. Initial budgetary considerations and lack of personnel were cited as reasons but in 1952 Maulana Abul Kalam Azad cited Pakistan and domestic Muslim sentiments to dissuade Jawaharlal Nehru from going ahead with normalisation. Hence, for over four decades, recognition-without-relations became the hallmark of India’s Israel policy.

The end of the Cold War, new international political order and the Kuwait crisis considerably influenced the then prime minister P V Narasimha Rao to modify that policy and normalise relations in January 1992. In the initial years, one could notice a sense of uneasiness in the new situation and major engagements with Israel were accompanied by meetings with Palestinian president Yasser Arafat or pro-Palestinian statements.

More than a quarter of a century later, one could still notice the traditional desire to ‘balance’ relations with Israel with the traditional pro-Palestinian positions. The visits of President Pranab Mukherjee in October 2015 and of External Affairs Minister Sushma Swaraj in January 2016 clearly indicate this trend and both visited Israel as well as Palestine. Interestingly, the President visited Israel before Swaraj. Hence, one could argue that Modi is trying to find a ‘balance’ in his engagements with both sides and this has contributed to the continuing uncertainty over his visit to Israel.

Two, beginning with his visit to the UAE in August 2015, the Prime Minister undertook three major visits to the Middle East that took him to Saudi Arabia, Iran and Qatar and in addition he was in Turkey in November 2015 for the G-20 summit. All his bilateral engagements with the Middle East were stand-alone visits and a similar move vis-à-vis Israel would be strategically more relevant than a ‘balancing’ visit to Ramallah.

This is easier said than done. While Home Minister Rajnath Singh did not visit Palestine, both Mukherjee and Swaraj did visit Abbas in Ramallah. Can Modi go to Israel without paying a customary visit to Mahmoud Abbas? With Egyptian President Abdel Fattah Al Sisi already visiting him twice, Modi would not be able to ignore Cairo if he visits Ramallah. Of late, Amman has become a bridge between India and Palestine and hence if an Israel visit turns out to be a regional one, can he ignore King Abdullah of Jordan?

Three, the forthcoming assembly elections in Uttar Pradesh are often cited as the immediate reason for the delay. Electoral success in this state is central to Modi’s re-elections bid in 2019. Though the BJP has not reached out to the Muslims or overtly sought their votes, a highly publicised visit to Israel is bound to alienate the minorities and contribute to them aligning against the party, something Modi could ill-afford at this point when the SP-Congress alliance seems to be a foregone conclusion.

Four, a powerful segment of the Indian elite has not come to terms with Rao’s 1992 decision and continues to argue that relations with Israel, especially military-security cooperation, are a dilution of the moral contents of the India’s foreign policy and a betrayal of the Gandhi-Nehru legacy. While some are passive, others vociferously seek a political, economic and cultural boycott of Israel and its artists and cultural icons. They even go the extent of ostracising the peace camp in Israel which seeks political accommodation and co-existence with the Palestinians. The government could not ignore these voices, often expressed through the media and other forums. It would be safe to assume that such voices are not totally absent within the corridors of power, especially in the South Block.

Five, some of the recent decisions by the Modi government indicate that it is not ready for a complete reappraisal of the Israel policy. In July 2015, India abstained in the United Nations High Commissioner for Refugees over a resolution on the Gaza War of 2014 and justified it over the reference to International Criminal Court. However, in April last year it voted with the Arab-Islamic countries in the United Nations Educational, Scientific and Cultural Organisation over a resolution that questioned Jewish religious claims to Jerusalem and in a second vote on the same issue in October, it abstained. Moreover, the Indian government had not responded to some of the recent terror attacks in Israel which was not the case in the past. These indicate that Modi’s Israel policy is dithering; it neither follows the earlier policy of unqualified support for the Arabs on issues pertaining to the Arab-Israeli conflict nor is prepared to evolve a well calibrated policy of nuanced shifts.

Six, one could also argue that Modi is yet to find the right ‘price’ to undertake a visit, which would be controversial irrespective of when and how. Things that Israel have to offer such as military-security cooperation and assistance in economic agenda such as agriculture, water management, recycling etc, are important but not attractive enough for a prime ministerial visit to Israel, stand-alone or regional one. Indeed, as things stand, politico-economic gains for G2G meeting is not commensurate to the political cost and controversies that a Modi visit would attract. As the Israelis often say, “Not enough meat on the table.”

Unlike oil-rich Arab countries such as the UAE, Israel lacks financial clout but has alternative options. With the US and other Western powers eagerly eyeing the Indian market, the military-security cooperation with Israel would have to go beyond cash-and-carry mode and encompass joint research, development, production and possible exports to third parties. Moreover, countries, like individuals, do not walk the talk when it comes to technology transfers and procurement is the only option. Public or private Indian groups would have to invest in sensitive military and non-military technological companies in Israel with the explicit purpose of getting these technologies into India. This is the only option for Modi’s economic agenda vis-à-vis Israel. Stakes for public sector, Indian oil and gas companies in the huge gas reserves in the Mediterranean Sea off the Tel Aviv coast could also be one attraction.

As happens to most decisions of the present government, there is always an imponderable ‘surgical strike’ that is still delaying Modi’s visit to Israel.