Who Will Prevail In French Presidential Election And Get To Preside Over Nation’s Decline? 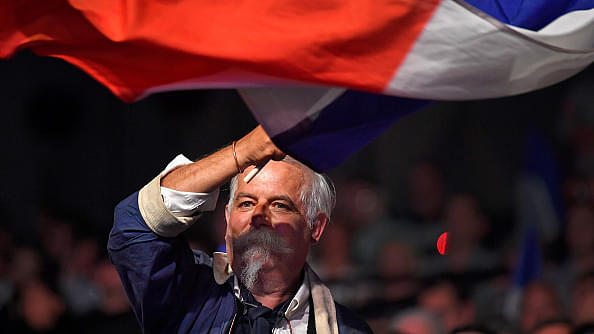 One of the most unpredictable French elections is being closely fought. (Jeff J Mitchell/Getty Images)

The last time there was a presidential election in France, I like to think my endorsement made a difference in the outcome.

Now that another election is about to take place, with a first round this Sunday and a runoff election between the top two candidates two weeks later, it’s time to once again pontificate about the political situation in France. But before looking at the major candidates, let’s consider a couple of pieces of economic data to get a sense of the enormous challenges that will have to be overcome to boost France’s anaemic economy.

We’ll start with this measure of implicit pension debt (IPD) in various European nations. France, not surprisingly, has made commitments to spend money that greatly exceed the private sector’s capacity to generate tax revenue.

By the way, the accompanying article notes that the numbers for France are even worse than suggested by the chart.

Most tax and accounting codes require companies to report such implicit debts on the liability side of the ledger as obligations. Not so with governments, whose accounting practices would under normal circumstances be considered as falsifying public accounts. …According to a recent study, six European countries – Austria, Finland, France, Germany, Italy and Poland – have an IPD exceeding 300 percent of gross domestic product. …And the kicker? The data cited above are based on the present value of future pensions as of 2006. More up-to-date figures probably won’t be available until the end of 2017. …The issue is no longer when France goes bankrupt, but when Europe does. The level of debt declared in the national accounts is already worrying. With implicit pension liabilities a multiple of that, it appears that a systemic implosion is unavoidable.

Here’s another sobering visual. France is doing a very good job of scaring off the geese that lay the golden eggs. It is losing more millionaires than any other country.

The combined message of these two visuals is that the already-enormous burden of spending in France will get worse, yet the country is chasing away the people who finance the lion’s share of the government’s budget.

And lots of young entrepreneurs also are escaping, which further exacerbates the nation’s long-run troubles.

Now that we’ve looked at where France is heading, let’s contemplate whether the politicians running for President will make the situation better or worse.

We’ll start with this helpful table summarising the views of the major candidates (though the hard-left vote apparently has consolidated behind Mélenchon, so Hamon can be ignored).

What’s not captured in this table, however, is that the presidential race pits two outsiders (Mélenchon and Le Pen) against two establishment candidates (Macron and Fillon).

And this is leading to some interesting analysis. The establishment point of view is captured by Sebastian Mallaby’s column in the Washington Post. He is very opposed to Fillon, Le Pen and Mélenchon, and also rather concerned that his preferred candidate – Emmanuel Macron – won’t make it to the runoff.

In the first round of its presidential election, to be held on Sunday, some three-quarters of the French electorate are expected to back candidates who stand variously for corruption, a 100 percent top tax rate, Islamophobia, Russophilia, Holocaust denial, the undermining of NATO and the traumatic breakup of Europe’s political and monetary union. France was once the cradle of the Western Enlightenment. Now it threatens to become a spectacle of decadent collapse.

I disagree with some of Mallaby’s analysis, but enjoyed his depiction of Mélenchon, who bizarrely thinks Venezuela is a role model.

Jean-Luc Mélenchon, the Communist-allied candidate who styles himself after Venezuela’s Hugo Chávez and promises a “citizens’ revolution.” No prizes for guessing that he’s the one who proposes a 100 percent top tax rate… Oblivious to the fact that France has taxed and regulated its way to a 25 percent youth unemployment rate and a government-debt trajectory that threatens Armageddon, he wants further cuts to the French workweek, an additional 10,000 civil servants and a shift in the retirement age from 62 to 60.

To put it in simple terms, Mélenchon is appealing to voters who think Hollande didn’t go far enough.

CNN reports that Mélenchon is even more fixated on class warfare than Bernie Sanders.

Instead of a 90 per cent top tax rate, he wants to steal every penny from the supposedly evil rich.

Jean-Luc Mélenchon, who has been endorsed by the French Communist Party, says he would introduce a 100% tax on income above €400,000 ($425,000). …France already has some of the world’s highest rates of income tax, and previous attempts to push them even higher have failed. …Around 10,000 millionaires left the country in 2015, followed by 12,000 last year, according to New World Wealth.

Though maybe he’s the French version of Obama, who also got support from communists.

And, like Obama, he thinks he should get to decide when someone has earned enough money.

“I believe that there is a limit to the accumulation [of wealth],” Mélenchon said in March. “If there are any who want to go abroad, well, goodbye!”

Though at least he has the courage of his convictions. He doesn’t mind if upper-income taxpayers leave. Though I wonder if he’s given any thought to who will then pay the bills?

Anyhow, the 100 per cent tax is just one of many crazy ideas.

Prince Michael of Liechtenstein is a very astute observer of European political and economic affairs and his analysis is more accurate. We’ll start with what he wrote about Le Pen’s support for statism.

Ms. Le Pen’s…socialist economic program will continue the ongoing destruction of the French economy, its competitiveness and public finances. …Such a scenario would, however, only accelerate a disaster that was already looming. The present government’s socialist policies, which have shied away from reform and preserved France’s oversized public sector, will eventually bear the same results.

To augment that analysis, Le Pen is considered on the right simply because of her anti-immigrant policy. But on economic policy, she is very much on the left.

Mr. Macron…claims that he will bring France’s budget deficit below the European benchmark of 3 percent. …The candidate’s plan…does not appear plausible in light of his intention to further increase government spending. Mr. Macron’s pronouncements indicate an adherence to the Keynesian economic policy approach at the EU level. According to him, Europe should end austerity and introduce a growth model in which additional spending – on top of the already lavish outlays planned by European Commission chief Jean-Claude Juncker – ought to be implemented. The Macron policies boil down to more state and more EU centralization. At the heart of the scheme is the creation of a European Ministry of Finance and Economy, an all-powerful body to plan and monitor the EU economy. …Macron intends to continue treating the French cancer with aspirin and transmit the disease to Germany and the rest of the EU, while demanding that they pay for France’s subsistence in the meantime.

In other words, Macron wants this cartoon to be official French policy. Yet some people actually think of him as a pro-market reformer. Wow.

Let’s conclude with these wise words from an editorial in today’s Wall Street Journal, which is very worried that the runoff may feature two pro-big-government outsiders.

All four major candidates are polling at around 20%, but Mr. Mélenchon has momentum and the highest personal favorability. A Le Pen-Mélenchon finale would be a political shock to markets and perhaps to the future of the EU and eurozone. …Mr. Hollande’s Socialists have made France the sickest of Europe’s large economies, with growth of merely 1.1% in 2016, a jobless rate above 10% for most of the past five years, and youth unemployment at nearly 25%. His predecessor Nicolas Sarkozy and the Republicans talked a good reform game but never delivered. …the stage is set for candidates who appeal to nativism or a cost-free welfare state. Let’s hope a French majority steps back from the political brink.

By the way, it’s not yet time for me to make an official endorsement, though I’ll share my leanings.

I confess that I’m torn between Fillon and Mélenchon. By French standards, Fillon is apparently very pro-free market. So I should like him. He could be the Ronald Reagan or Margaret Thatcher of France.

But what if he turns out to be another Sarkozy, a big-government fraud?

If I support Mélenchon, by contrast, at least I can say with great confidence that I will be able to continue using France as an example of bad public policy. I realise that’s not an ideal outcome for the French people, but you know what they say about omelettes and eggs.

In any event, I’ll wait until the runoff election before selecting a candidate.

This piece was first published on the writer’s blog, International Liberty, and has been republished here with permission.