Why India-U.S. Energy Ties Are Stuck 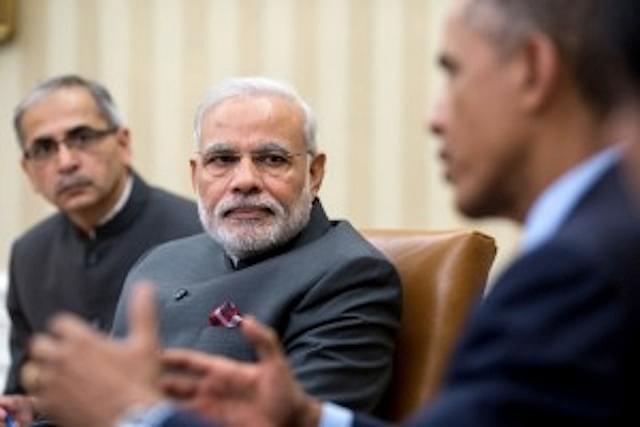 Even as India and Germany move ahead on energy cooperation, India-U.S. energy collaboration is stranded in the three key areas: nuclear power, shale gas, and solar energy. But with cheaper energy imports due to the fall in fossil fuel prices over the past 12 months, India can wait till it gets a better deal from the U.S.

Even as India and Germany explore cooperation in the field of renewable energy, collaboration between India and the U.S. in the energy sector has devolved into a series of logjams[1]. Although the latest India-U.S. energy dialogue of 21 September 2015 mentioned cooperation on renewable energy and shale gas, it is stuck due to commercial or legal factors[2], and indicates a transactional relationship rather than one that is long-term or strategic.

Nuclear energy was prominent in the latest announcement of the India-U.S. energy dialogue, but it is not mentioned in the press statement on the subject issued by the Indian Embassy in the U.S.

When President Barack Obama visited India in early 2015, an agreement on nuclear liability insurance, which would open up the sector to Western firms, was projected as the big outcome of the visit[3]. But in September 2015, General Electric’s Chief Executive Officer Jeffrey Immelt ruled out participating in atomic energy in India unless India brought its liability regime in line with international norms[4]. Clearly, the breakthrough announced during Obama’s visit was not quite groundbreaking.

Given the backdrop of the 1984 Bhopal tragedy and the more recent 2011 Fukushima disaster, drastic changes to the Indian law will be politically ill-advised. Meanwhile, the U.S. follows a different liability concept at home. For instance, British Petroleum agreed in July 2015 to pay $18.7 billion to settle claims arising from the 2010 spill in the Gulf of Mexico[5]. German automaker Volkswagen could potentially face penalties adding up to $18 billion for falsifying emission tests on its cars in the U.S., and the company’s executives may also face criminal prosecution[6].

A nuclear incident can be more damaging and can cause lasting harm. In the case of the Fukushima accident, the Japanese government, in July 2015, approved compensation payments of $57 billion, which Japanese taxpayers will indirectly pay for[7]. After the Fukushima disaster, there is an awareness that even the best planned systems can sometimes fail, while the Volkswagen case indicates that companies can knowingly sell inferior products. In this scenario, changing the Indian law to limit the liability of suppliers would be inadvisable.

In addition to the legal aspects, cost remains a major hurdle for Western companies. Nuclear reactors being built by Westinghouse and Areva in the U.S. and Europe cost around $6 million (Rs. 40 crores) per megawatt[8,9]. Rival designs from India and Russia have a per megawatt cost of Rs. 14.7 crores and Rs. 20 crores respectively. Given their high capital costs, Western reactors may not be commercially viable in India even if the legal issues are worked out.

The extraction of shale gas is repeatedly mentioned in the bilateral energy press statement. India wants to invite U.S. firms to invest, and would like to collaborate with American firms in developing fracking technologies, particularly “waterless” fracking.

On the face of it, this seems a sensible goal—India is believed to be rich in shale gas—187.5 trillion cubic feet in five (of 26) basins, according to ONGC [10]. The U.S. is a leader in shale oil and gas technology and production. However, this is unlikely to work in the current environment.

India has traditionally not been a favored destination of oil exploration firms because it has very little oil. American and other companies are not interested in hydrocarbon exploration in India. Their disinterest is evident in the New Exploration and Licensing Policy (NELP), where few foreign firms have actually bid for blocks. In the latest round of the NELP (IX), none of the 16 blocks have been awarded to an international firm[11]. India is not considered “prospective” not only because of its limited oil and gas reserves, but also due to regulatory issues such as those faced by Reliance in KG-D6. And all this has kept investors away.

The potential reserves of shale gas in India are unlikely to change this reluctance. Hydrocarbons are produced from shale using a technique called fracking—which requires large quantities of water. India has three times as many people as the U.S. on one-third the land, and is already water-stressed. Using water for resource extraction rather than food production can have adverse political consequences. As for “waterless” fracking, the technology is still being developed. But investments are based on current knowhow, not breakthroughs in technology that may happen in the future. As a result, cooperation in shale gas does not seem likely.

During his budget speech in 2015, India’s Finance Minister Arun Jaitley announced a target of 100,000 megawatts (mw) capacity of solar power by 2022, in order to take a less polluting path to progress. The government tried to support domestic industry by mandating a domestic content requirement for solar power projects. The U.S. challenged this at the World Trade Organisation (WTO), which has reportedly ruled against India[12,13]. The U.S. wants India to shift to non-coal, non-fossil fuel energy sources, but it is unwilling to share intellectual property in solar technologies, and is forcing India to buy U.S.-made equipment for solar power generation.

India’s solar push is directed at reducing carbon dioxide emissions. But India bears relatively little responsibility for global warming—the U.S., Europe, and China have been responsible for the bulk of carbon emissions over the decades, and continue to account for the majority of emissions even now[14].

At Rs. 5+ per unit, solar power costs more than coal at Rs. 3.26 per unit, and it is an expensive choice for a poor nation[15,16]. As a low income country with limited funds, India may not be able to afford solar power. Besides, India’s manufacturing capacity for solar cells and solar panels is limited. Two of India’s largest solar panel manufacturers— Moser Baer Solar and Tata Power Solar—have a combined manufacturing capacity of only 450 mw.

The domestic content requirement was an attempt to give this sector a boost—and get tangible benefits in return for choosing a more expensive option. But due to the WTO ruling, India is likely to go slow on implementing solar power facilities. Any concession from the U.S. to India’s position of favouring local vendors will run afoul of the WTO.

It is in these three areas—nuclear technology, shale gas, and solar power—that the India-U.S. energy bilateral is stuck. No solutions acceptable to both the sides seem possible at present. From an Indian perspective, this impasse is not too damaging as of now—energy imports are cheaper due to the fall in fossil fuel prices over the past 12 months. India can wait till it gets a better deal from the U.S.

This article was first published in the Gateway House on October 15, 2015 and has been republished here with permission. ‘Gateway House: Indian Council on Global Relations’ is a Mumbai-based foreign policy think-tank established in 2009.