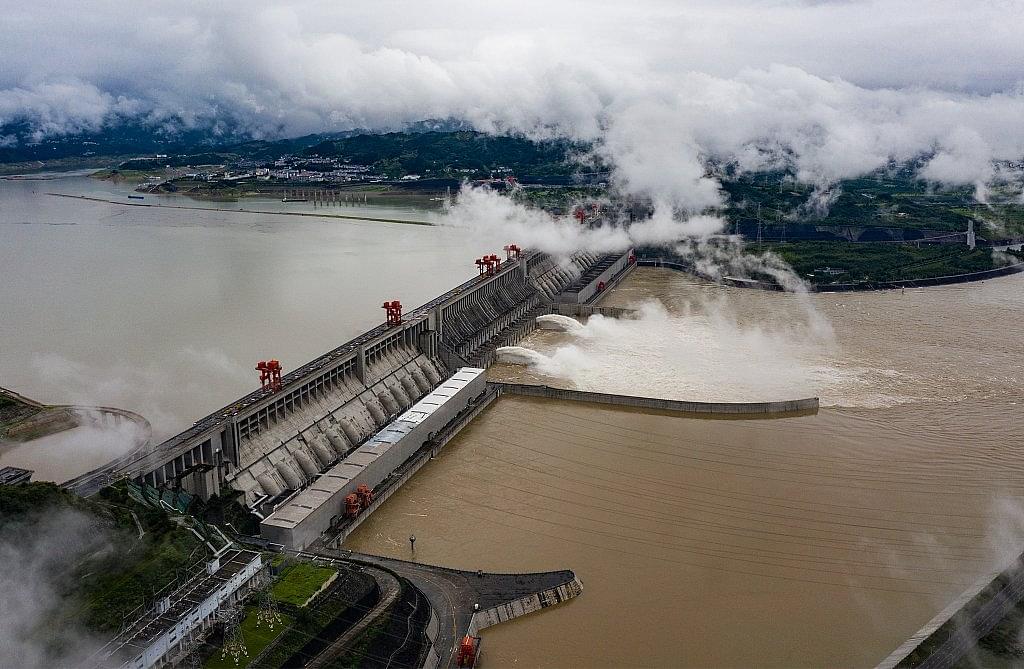 At least 33 people have died and around 1.24 million have been displaced as devastating floods wreaked havoc in Central China’s Henan Province.

Life in the capital city of Zhengzhou, which bore the brunt of the flood fury, was completely paralysed. The city's drainage system collapsed due to relentless downpour flooding many residential areas.

Grim images of flipped cars on flooded roads and swamped ground-floor shops and flats emerged as the torrential outpour left a huge trial of destruction. The city of Zhengzhou is home to 12 million people.

Passengers trapped inside city's submerged rail system took to social media with desperate messages begging emergency response workers to come to their rescue before it was too late.

In Gongyi, 80km (50 miles) west of Zhengzhou, landslides and floods were reported to have killed at least four people and several villages were left without power for more than 24 hours.

Henan province is a major base for country's industry and agriculture. It is crisscrossed by multiple waterways, many of them linked to the Yellow River, which has a long history of bursting its banks during periods of intensive rainfall. The province is located in Central China's plains, spanning four major river basins of Haihe River, Yellow River, Huaihe River and Yangtze River, and has 1,030 rivers each with a drainage area of at least 50 square kilometers.

Meteorologists attributed the downpour to the effect of a typhoon In-Fa that was formed near South China and the topography of the region. The stable atmospheric circulation has contributed to the lingering precipitation in central and western parts of Henan, the China Meteorological Administration (CMA) said in a statement.

China's military reportedly blasted a dam in the city of Luoyan to release floodwaters threatening one of its most heavily populated provinces.

According to local authorities, the heavy rainfall had caused a 20-metre breach in the Yihetan dam, which they feared “could collapse at any time”. A division of China’s military were sent out to the site to carry out emergency blasting and flood diversion.

China has historically depended on dams and reservoirs to control the flow of water.

Around 30 billion cubic metres of floodwater were intercepted last year by dams and reservoirs in Asia's longest river, the Yangtze, mitigating flooding downstream in areas including Shanghai, China's emergency management ministry said. But the country's vast water management schemes are increasingly find it difficult to contain all the flooding while there are questions about the endurance of dams built decades ago.

Last year, authorities in eastern Anhui province were forced to blow up two dams to release water from the rising Chuhe River over cropland.

The structural integrity of the Three Gorges Dam on the upper Yangtze, the world's largest hydroelectric dam, built in an area criss-crossed by geological faultlines, has often been called to question

The Three Gorges dam is all about scale and magnitude. It’s the largest dam and power station in the world. The money spent on it, 95.5 billion yuan (over Rs 1 trillion), puts it on any list of the most expensive projects in the world.

It stands on the ever-mighty Yangtze River, around which live 500 million people – considerably higher than even the population of the United States of America.

The three gorges reservoir is capable of holding a maximum water level of 175 metres.

A decade after its construction, the 2020 China floods continue to test the Three Gorges dam big time.

Beijing is not one for open admissions, but revelations emerged that the dam saw "displacement, seepage, and deformation" with a second round of flood gushing at a fierce 61,000 cubic metres per second. In July 2020, the waters reached a peak flood level of 164.18 metres, surpassing the previous high and going over the flood limit level. Three lower floodgates were opened to release the water that day.

Chinese experts however have rejected the claims that the relentless downpour and flooding in Henan Province were due to "widespread construction" of dams, saying the dams are playing a pivotal role in countering water disasters.

What people should learn from the floods is the importance of nature's adjustments together with man-made facilities in dealing with extreme situations, CCP mouthpiece Global Times quoted Chinese experts as saying.

Most countries build dams, which greatly improve flood control and disaster reduction capacity, so the construction of dams should not be denied because of a rare disaster, Global Times quoted Fu Zongfu, a professor from College of Water Conservancy and Hydropower Engineering at Hehai University as saying.