MeitY Gets 'Mightier': India's IT Ministry Gets A Reboot With 2 Accomplished Technocrat-Entrepreneurs At The Helm 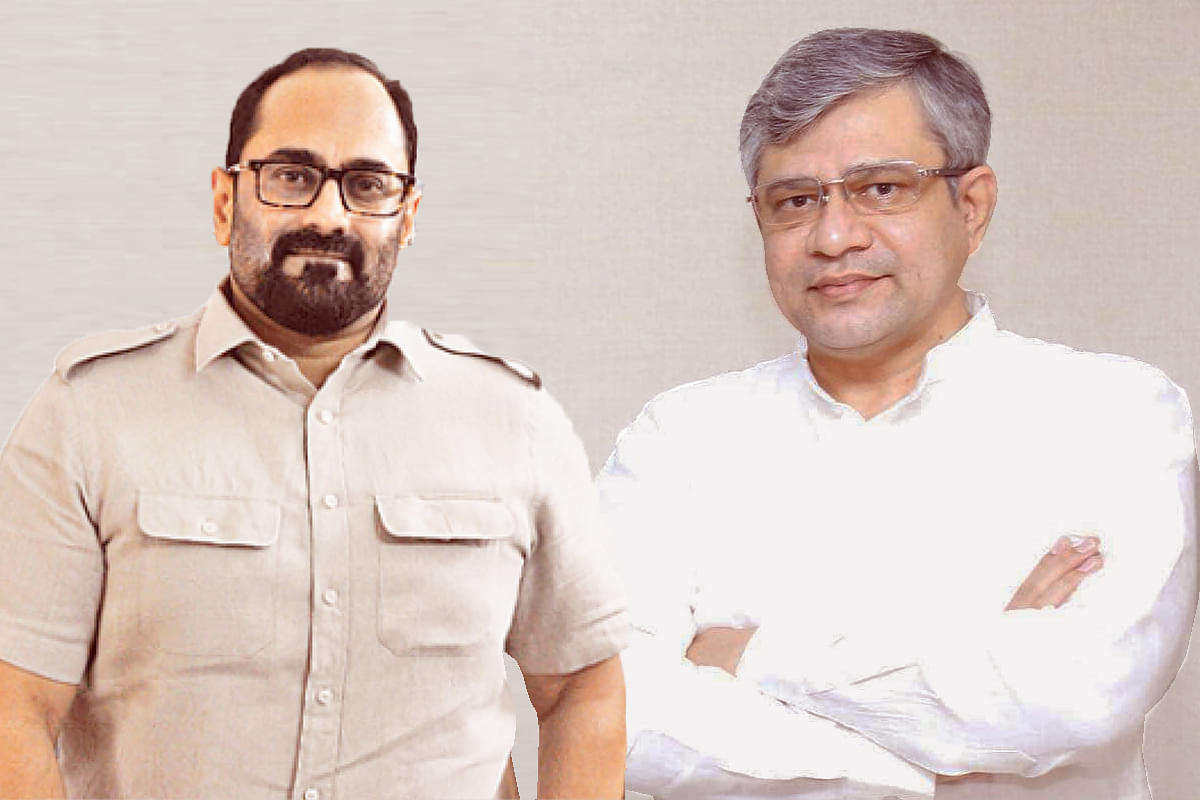 Two accomplished technocrat-entrepreneurs will be at the helm of affairs at India's Ministry of Electronics and Information Technology (MeitY).

As a part massive rejig of union cabinet by Prime Minister Narendra Modi, Ashwini Vaishnav, who was inducted into the Union Cabinet on Wednesday (Jun 7), was appointed to head the Union Ministry of Electronics and Information Technology. He will also serve as the Union Railway Minister.

Leading technology entrepreneur from Bengaluru and member of parliament Rajeev Chandrasekhar was appointed as Minister of State in MeitY. Rajeev was also assigned additional charge in Ministry of Skill Development and Entrepreneurship.

Ashwini Vaishnav, a former IAS officer who holds degrees from IIT Kanpur and Wharton Business School, joined BJP in 2019. He was elected as Rajya Sabha member from Odisha.

Vaishnav graduated from MBM Engineering College (JNVU) Jodhpur, Rajasthan in 1991. He then completed his M.Tech from IIT Kanpur in 1994.

Vaishnav joined Indian Administrative Service (IAS) in 1994. He served as a Collector in Odisha's Balasore and Cuttack districts. While working as Collector in Balasore, Vaishnav earned appreciation for organising and executing relief and rehabilitation work in his district in the aftermath of super cyclone that wrecked the state.

In order to position India as a global hub for Electronics System Design and Manufacturing (ESDM), MeitY has designed and implemented several schemes including the Production Linked Incentive Scheme (PLI), mScheme for Promotion of Manufacturing of Electronic Components and Semiconductors (SPECS) and Modified Electronics Manufacturing Clusters Scheme (EMC 2.0). Vaishnav will be expected to hit the ground running to further strengthen these initiatives.

started his journey at Intel in Silicon Valley, where he was a part of the team that designed Pentium under the now CEO Pat Gelsinger and Vinod Dham, who is called the father of Pentium chips. During his stint as software engineer in U.S, Chandraekhar was a coder specializing in Compilers and Operating systems; systems designer working on Multiprocessor Unix systems and a research assistant working in the field of Artificial Intelligence and Robotics

In his office in Benglauru, the framed Intel chip hangs in his office with more than a dozen names of people, who worked on the chip, written on it.

MeitY recently launched a scheme aimed at setting up / expansion of existing Semiconductor wafer / device fabrication (FAB) facilities in India or acquisition of Semiconductor FABs outside India. Chandrasekhar can be expected to bring his expertise in accelerating these initiatives

After his short stint in the US, Chandrasekhar came back to India in 1991 and founded BPL Mobile in 1994, where he built the country’s largest Cellular Network. He exited the company by selling his stakes to the Essar group for $1.1 billion in 2005.

Chandrasekhar then later founded private equity firm Jupiter Capital in 2006, where he was Chairman till 2014.

Initially elected to Rajya Sabha as an independent member from Karnataka, he was re-elected to as a member of BJP in 2018.

Chandrasekhar set up the Flags of Honour Foundation looks after the families of Armed Forces martyrs. It supports martyrs families and serves as a platform for citizens who seek to help families of martyrs. In 2014, Chandrasekhar fought in the Supreme Court to give the Indian armed forces voting rights in the areas they were posted in

His Namma Bengaluru Foundation partners with city citizens and works at grass root to highlight and improve the civic and administrative conditions of Bengaluru.