Swarajya Awards 2017: Celebrating And Honouring The Best Minds Of India 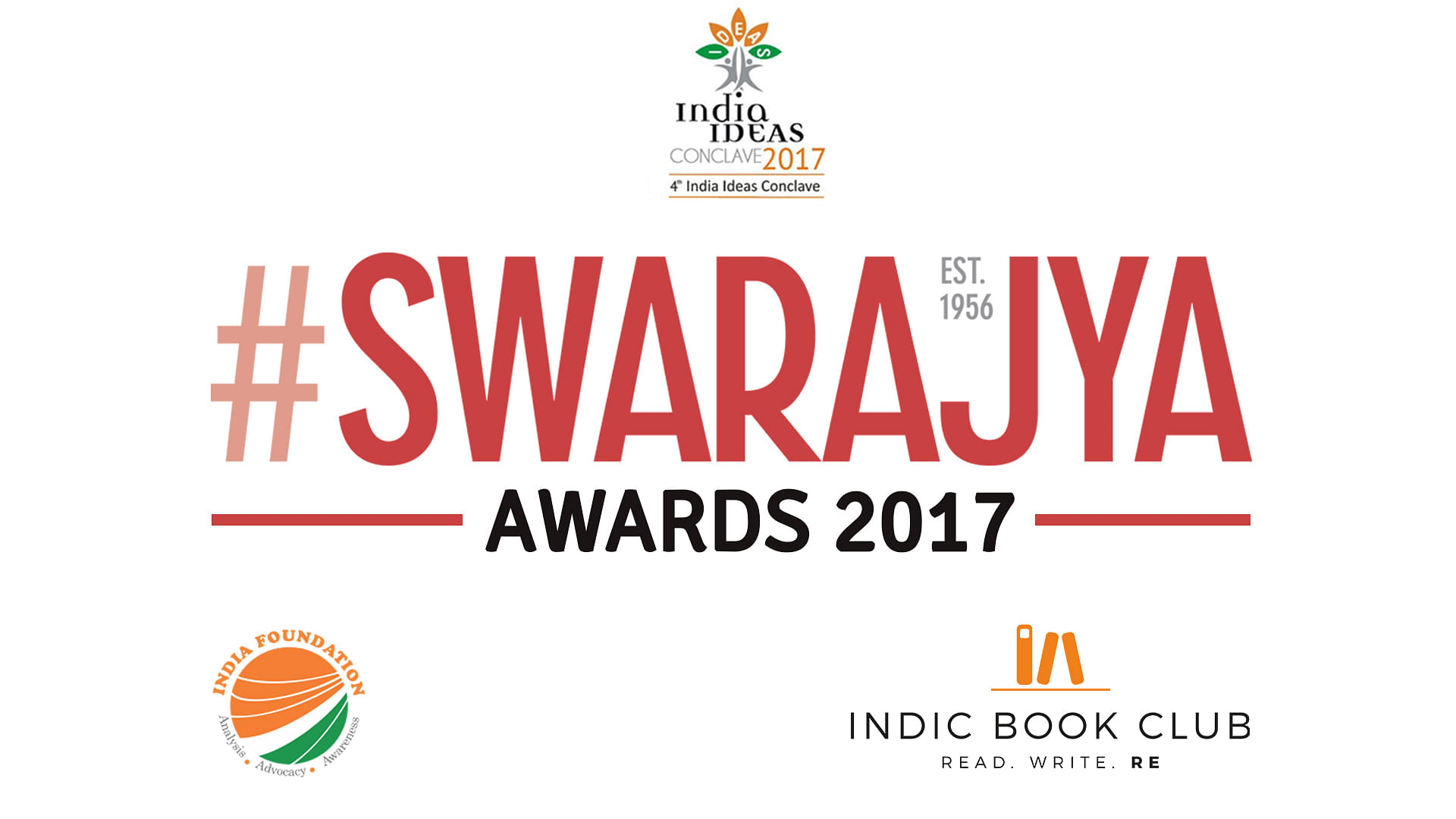 Following a successful two-year run, the third edition of Swarajya Awards will be held in Goa during a special session of the annual India Ideas Conclave organised by the India Foundation, this month. Vice President Sri Venkaiah Naidu will present the awards to the winners and felicitate them.

Selected by an eminent panel and attractive prize money, this award is well positioned to emerge as a prestigious annual event. Four awards (named after illustrious individuals) encompassing economics, politics, society and cultural spheres will be presented every year.

Here’s a list of last year’s winners and a description of their work:

Baijayant ‘Jay’ Panda is a leader who complements his ideas of good governance with relentless action. He has been a distinguished parliamentarian; he first entered the Parliament as a member of the Rajya Sabha in 2000, then again in 2006, and then got elected to the Lok Sabha from the Kendrapara constituency in 2009 and 2014. In this time, he has made valuable and enlightening interventions in debates on issues of national importance both inside and outside the Parliament, and has emerged as one of the most respected opinion-makers in the Indian public discourse.

In the twenty-first century, India needs a political culture which is driven by both the force of ideas and the force of action. Such an association of thought and work was seen in the life of Dr Shyama Prasad Mukherjee, and, a similar association is now seen in the efforts of Sri Baijayant ‘Jay’ Panda. With his perceptive ideas of governance, and his unflagging efforts behind them, Sri Panda is today an inspiration to all Indians who wish to make a productive contribution to the unceasing project of nation-building.

The B R Shenoy Award is in honour of India’s bravest free market economist who dared to challenge Nehruvian socialism. Eminent journalist T C A Srinivasa-Raghavan, the second recipient of this award, is also someone who has dared to tilt at the windmills of socialism when it was not fashionable to do so.

Though most of his extended family comprised of bureaucrats, he turned away from the civil services and stepped into the world of publishing, joining Macmillan India as economics editor in 1975. Five years later, he turned to journalism. After three months of reviewing films for the Free Press Bulletin of Mumbai, he joined The Eastern Economist. He has since worked in Financial Express, Economic Times, Business Standard and The Hindu Businessline.

TCA’s razor-sharp mind and deep contacts in the bureaucracy have made him one of India’s most insightful writers on the political economy, showing how even the most well-meaning of programmes get hijacked by bureaucrats and vested interests. His writing has a light touch that makes economics easy for lay persons as well. He was the first to use the term TamBrahm in the Times of India and popularise it. TCA is the author of an e-book, The Crown of Thorns: The Governors of the RBI. In a research project he did for ICRIER in 1988, he was the first to suggest that India should focus on services.

Temsutula Imsong blazed a trail in the Swachh Bharat campaign and single-handedly turned around abhorrent conditions in one of Varanasi’s famous riverside ghats – the Prabhu Ghat.

Determined to make a difference, Ms Imsong along with her friends mobilised support using the social media. Her team also chipped in with money to buy essential cleaning and protective gear for volunteers. The team spent their evenings clearing the ghats, removing all the dirt accumulated over the decades. The team would work hard in the evening only to find the ghats dirtied again during the course of the next day. The stench of garbage cleared could sometimes get so bad that many of Ms Imsong's team members were unable to eat or even drink water. The pictures they shared of a clean Prabhu Ghat at the end of the day, three of which went viral over social media, won them praise from millions of followers across India, including Prime Minister Narendra Modi, himself.

Mission Prabhu Ghat was a grand success. Ms Imsong’s team had roped in locals, tourists, volunteers and even students to make this possible. After Prabhu Ghat, Ms Imsong’s team cleaned the Babua Pandey Ghat. They have also adopted two small reservoirs, Sonebhadra Kund and Gauri Kund, which have been desilted and cleaned up. Her work now attracts many volunteers, mainly students, who participate in the shramdaan to make their city a little more cleaner.

Ms Imsong’s extraordinary efforts in mobilising and sustaining a team of volunteers to clean up a part of the city she resides in, embodies the true spirit of the Swachh Bharat campaign.

Jaya Jaitly is provocateur of a silent revolution in the traditional arts and crafts of India. She has inspired the kaarigars who in turn have inspired her, tirelessly, for decades. Through Dastakaari Haat Samiti, she has created viable platforms for artisans, craftsmen, and weavers, echoing the need to build a market for their work and saving the dying arts.

She has worked at the Gujarat State Handloom Development Corporation, nourishing the old embroidery art in drought-struck Kutch in Gujarat, where stories of economic success and financial sustenance sprouted amidst despair, owing to her determination and efforts.

Smt Jaitly's passion for cultural expressions has infused life into a number of efforts and initiatives meant to preserve and promote our cultural heritage. Her deep understanding of the dedicated community of artisans and their complex social fibre is exemplary. It stems from her seamless interactions with their arts at the grassroots.

She has written several books including Crafts Atlas of India and Vishwakarma's Children, showcasing Indian arts. She has helped evolve the language of arts and crafts by blending them with other facets in her seasoned engagement with culture.

Having worked with three generations of craftsmen, she has encouraged a chain of confidence-driven collaborations between them, generating in the process, several opportunities for the makers of beautiful arts. In her journey as a cultural impresario, she has worked constantly, opening knots of gender, caste and other identities compartmentalising artisans, their traditional skills and ideas.