A Piece Of Advice To Pakistan: Shake Off The Saudi Spell And Return To Your Roots 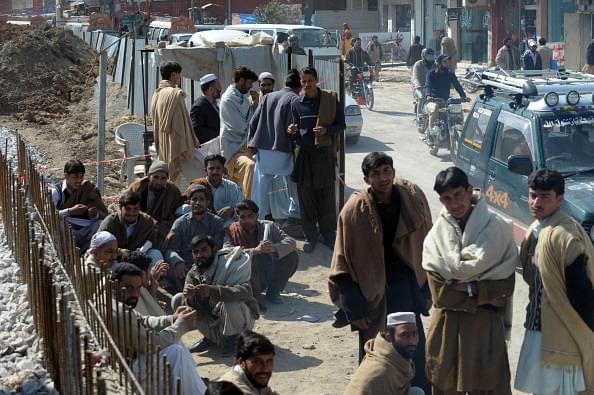 Pakistani labourers gather outside the overseas employment consultant office during the skill test to apply for a job at a Saudi construction company, in Rawalpindi. (FAROOQ NAEEM/AFP/Getty Images)

My epistle to Pakistani nationals.

Pakistan, come back to your Indian roots! Saudi Arabia is not who you are and its way of life is not your destiny. Ever since Pakistan’s independence in 1947, the Kingdom of Saudi Arabia (KSA) has exerted immense influence over your country’s religion, politics and worldview and the people in Pakistan have had little to say about it. Perhaps they are happy with the status quo. Perhaps our Pakistani neighbours are content to live and work in Saudi Arabia, which is certainly overly dependent on labour sourced from outside the country, (up to 35 per cent of its entire work force compared to 17 per cent in the US).

Pakistanis apparently relish the thought of working for the ‘superior’ Saudi Muslims who inhabit that sandy and arid peninsula. They obviously don’t mind travelling far away from home to take on unattractive jobs because they are impoverished in their own country. Saudis don’t want those jobs because, at least for now, many of the citizens of this oil-rich country don’t have to take up difficult jobs as they live off government subsidies facilitated by massive oil revenues.

Saudi Arabia is not a manmade economy the way that India and many other countries are. The Saudi people and especially the Saud family dynasty have had it easy up to now, thanks to its rich exchequer. However, they are moving toward a post-oil economy, which would re-shape the way its people benefit from subsidies, which could be reduced, and the way the Saudi government influences other nations, including Pakistan. Although some observers feel that the KSA just wants to spread their sharia seed, even if it is at the cost of Pakistan being shamed on a global platform while being officially labelled by the West as a terrorism sponsoring country. The KSA continually allows Pakistan to do their dirty work and to take all the heat, in their long-range plan of Arabisation (as opposed to Islamisation) and sharia law. The Kingdom of Saudi Arabia, on the other hand, always comes out smelling like a rose. While Pakistan is seen as the bad guy internationally, the KSA succeeds in maintaining a stain-free image in front of the US and others.

Saudi Arabia continues to be a strong influence on Pakistan and Pakistanis in general. The KSA considers Pakistan a valuable ally for spreading Arabisation, especially because Pakistan shares a 909-kilometer border with Iran. Since Pakistan has the largest Muslim army in the world, and is also a nuclear power, it can have a great neutralising effect on Iran, should that country ever become aggressive toward the Saudis. Saudi Arabia understands the value in having allies and using all the influence they can to keep their loyalty. WikiLeaks lets us know what Saudi government officials really think of Pakistan when it quoted Adel al-Jubeir as saying: “We in Saudi Arabia are not observers in Pakistan, we are participants.”

Pakistanis should open their eyes and see the truth that Saudi Arabia’s influence has spread like wild fire, engulfing Pakistan’s politics, worldview and certainly its religious outlook. Saudi Arabia is arguably the most conservative Muslim state in the world, where women are not allowed to drive automobiles, be in public without a male guardian or dress the way they want to. Freedom of behaviour and thought are very much constrained in Saudi Arabia and Pakistan is headed in that direction because of its unconscious allegiance to all things Saudi. They should open their eyes and run, not crawl, back to their Indian roots. Embrace your Indian roots and stop leaning toward the Arab world, which has led you astray and into a state of disarray. Will a nation that supplies terrorism, one that has clearly brought you to this state of chaos and confusion, really be a viable ally? Or will a nation from which you came from share more similarities with you than the terrorist-linked Islamic Brotherhood?

Pakistan’s political elite’s yearning for velvety financial conditions may be looking in the wrong direction. Saudi Arabia has a failing economy and its way of life is dying. The superiority of the Saudis is an illusion. The wealth that some Pakistanis hope to gain from that arrogant country will run out soon because once the oil dries up, unlike India, they will have no way to compete in the global economy. India, however, is one of the fastest growing economies in the world – all without oil and without riches being handed out to her.

Pakistanis, come back to your Indian roots and demand your independence – from Saudi Arabia!

Dr. Abedi is the Founder of LADI and an Indian-American writer born in India to a Muslim family. She is a Muslim crusader countering Islamic extremism through her writings. She can be found at @drdeebaabedi