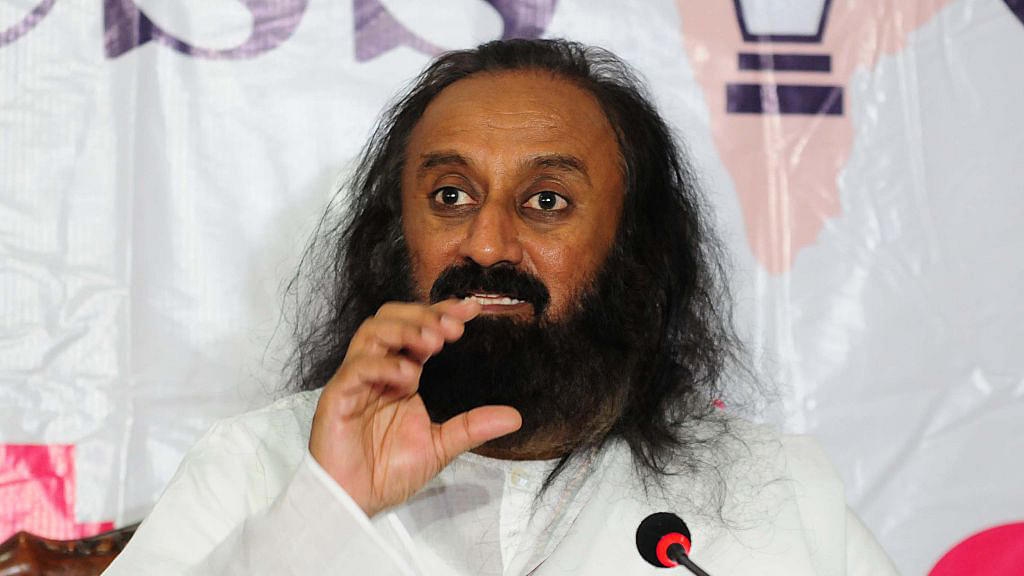 Ever since Art of Living founder Sri Sri Ravi Shankar chose to intervene in the Ayodhya issue and offered to mediate after his meeting with Syed Waseem Rizvi, chairman of the Uttar Pradesh (UP) Shia Waqf Board, at his Bengaluru ashram, plenty has been written and spoken, questioning his role as well as his credentials as a neutral mediator. Allegations that his intervention was to divert attention from his enormous wealth to being touted as the central government agent, the accusations have been far and wide.

A normal person would have in fact chosen to steer clear and attend to his job of spreading spirituality amongst his milling followers than getting embroiled in controversies and the seemingly no-win negotiating table. But not Sri Sri. He plunged in headlong, fully aware of the kind of flak he was going to attract, stating in his inimitable style, "he is used to controversies".

While many vested interests have had their individual say, staking their position as well as questioning Sri Sri’s role, what raised many eyebrows was the timing of his intervention,the Supreme Court scheduled to hear the case 5 December onwards, along with his views for a permanent solution.

Incidentally, starting from the Babri Action Committee, All India Muslim Personal Law Board (AIMPLB) and the related Muslim organisations denied having met Ravi Shankar to mediate an out of court settlement to the Ayodhya dispute. Interestingly, the related Muslim organisations, including the AIMPLB, firmly believe a favourable verdict awaits them when case comes up for hearing in the top court next month.

Ravi Shankar’s intervention, given the perception of his Hindutva and Bharatiya Janata Party leanings, is viewed as a possible spoke in the wheels, scuttling the solution that is likely to be offered to suit the interested parties. He has, however, firmly denied the same, projecting himself as totally neutral. The hue and cry raised, including the allegations against UP Shia Waqf Board chief Rizvi, is thus understandable.

But what is surprising is the position taken by Hindutva sections such as the Rashtriya Swayamsevak Sangh (RSS), Vishwa Hindu Parishad (VHP), as voiced by VHP joint general secretary Surendra Jain, who went on record stating that the resolution to Ayodhya dispute cannot come through talks. The VHP’s contention remains that the archaeological evidence in the matter is strong and favours Hindus and courts go by proof. RSS chief Mohan Bhagwat likewise has stated that any proposal has to be taken up under the wing of the VHP.

So what does Sri Sri has to offer, mediating between the concerned parties, stating as he does, that “we need to talk to all parties concerned”. What agenda does he have, though again, it needs to be stated here that he stresses he has no agenda but is coming in with an open mind to find a solution that will come from the heart and be acceptable to all stakeholders.

It is to be noted here that Ravi Shankar has suggested that the construction of a grand temple with the cooperation of both communities as the only solution if the issue has to be resolved forever. He has also suggested that the Muslim community should withdraw cases claiming rights to the disputed site and instead gift the land to Hindus in return for the goodwill from the community and for a mosque to be built elsewhere in UP.

Certainly, his suggestions point to the land being gifted to one party while the other gives up its claims on the same. Incidentally, in 2010, the Allahabad High Court had ruled a three-way division of the disputed site among Sunni Waqf Board, Nirmohi Akhara and Lord Ram Lalla.

Does this then point to Ravi Shankar not being a neutral mediator? Perhaps. And perhaps not. It depends on how you look at it.

If Sri Sri was clearly leaning towards Hindutva and had the agenda of securing the land for the Ram temple, the Hindutva faction should have by now jumped into the fray and lauded him as their saviour. Clearly, that didn’t happen and instead the factions are distancing themselves from his mediatory efforts. If on the other hand he has a hidden agenda to support the Muslim segment, again, a similar positive response would have ensued from them. That again clearly remained absent.

Sri Sri’s intervention and solution are openly resented by both parties to the dispute. Does that point to something beyond what is perceived? A clear play of politics, power, unseen benefits that may be scuttled if he mediates and actually succeeds in bringing the parties to the table and offer a solution that proves to be, in his own words, “from the heart” as against a cold court settlement which can be “questioned 50 or 100 years later”.

Ravi Shankar is not new to mediation. His role in resolving the 50-year civil war in Colombia bears ample testimony to his negotiating and mediation skills. He recently brought together 100 families of slain militants from the Kashmir Valley and families of 40 martyrs; a feat that is certainly unimaginable, especially when the families went on record that their initial reaction was that of anger and resentment which later transformed to understanding and forgiveness.

Whatever may be the perception, Sri Sri’s intentions, on the face of it, appear well meaning. A point to note here is, unless the concerned parties come to a consensus, no out of court settlement can be reached. And if it does occur, it would be because the solution offered was acceptable to all the stakeholders. This is irrespective of any formula Ravi Shankar may choose to put forth. No negotiation can bear fruit with one party feeling deprived or cheated.

If an out of Court settlement is the choice of the general public, not considering the views of the power heads, Sri Sri is the most qualified to negotiate such a settlement given his track record in skilful mediation. Both parties to the dispute should give him a chance to prove himself before indulging in mud-slinging.