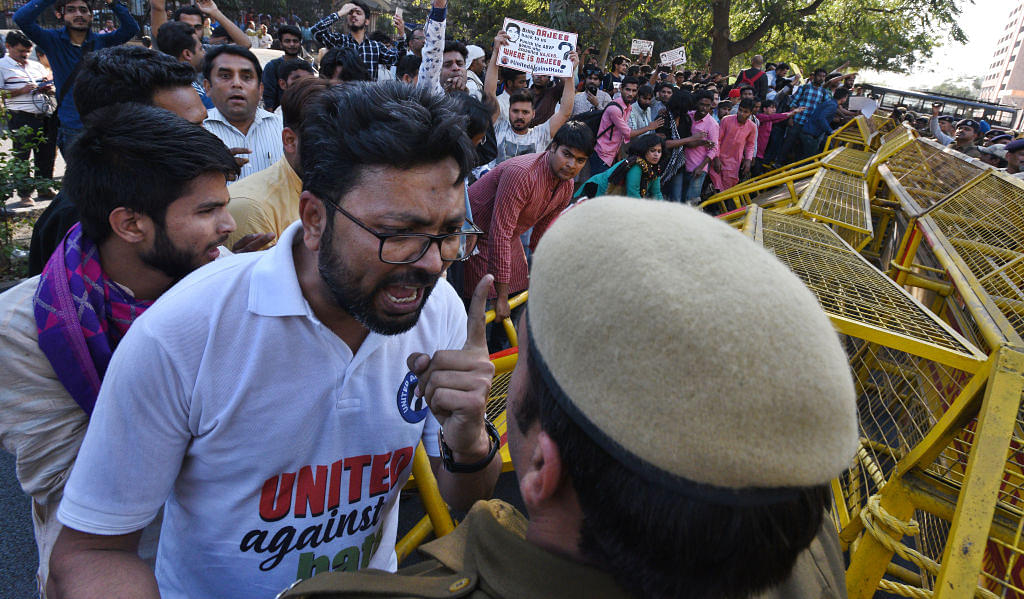 After the age of 25, the body starts becoming slow and the mind begins to crave for the immediate past of glorious youth. It has been four years since I completed my masters degree from Jawaharlal Nehru University (JNU), four years since I crossed that age of raging youth.

These were the thoughts that were crossing my mind while I was driving down Nelson Mandela Road along the JNU boundary wall on the night of 19 March 2018, when I suddenly felt that I was driving opposite the oncoming traffic. I felt like my brain tricked me into committing a massive traffic offence.

The seconds of contemplation passed and I found myself stranded in front of a gathering of students, which seemed proud of blocking the entire traffic on one of the cardinal roads of Delhi. Some were sitting on the divider, chit chatting and smoking like people do in cordial social gatherings. The senior ones were standing in circles, discussing things. One fine fellow knocked my window asking me to turn back as they have blocked the road in protest against the police, which was allegedly not responding to allegations of sexual harassment against a certain professor. The gentleman politely told me that I must turn back or I “will experience serious inconvenience’’.

Finding his politeness rather intimidating, I got down from my car and told the gentleman that though I offer full support to their cause, I strongly disagree with their method of blocking a cardinal road. Blocking the road can cause serious problems for emergency vehicles. A legitimate cause does not empower one to engage in illegitimate and irresponsible activities. While I was trying to engage in a logical dialogue with that gentleman, I could hear the shrieks of a few women, who felt that the old taxi wala parked behind me was insensitive for asking them not to block the road. The very next moment those ladies lunged at me screaming that “this is the problem with you guys in your cars. You can’t wait for 10 minutes. Your mothers and daughters should get raped for you to learn to wait for a cause’’. Given the beautiful benedictions hurled at me by the ladies, I tried to protest against such unacceptable behaviour, terming it undemocratic, just to find myself surrounded by approximately 20 students, heckling and yelling at me, not allowing me to utter a single word. Some of them pulled out their mobile phones while the ladies charged.

I rushed back into my vehicle as I recalled some cases that I had seen in my days in the campus where ladies took charge of a physical assault while the rest of the gang, mostly comprising of men beat a person into a pulp and finally presented a video of a struggling person being beaten to the police as a proof of women retaliating to an act of sexual harassment. This is an old radical left tactic in urban areas against those who dare to disagree with them when their gang is on the rampage. Seeing that I had figured out their plot, they began banging my doors and windows. One guy sat on my bonnet and began to box my windscreen. Thankfully, the police arrived and opened the barricade. The other cars began moving, but my car was not allowed to move for five more minutes. I could clearly see the violent streak in the eyes of these activists which leads them to shoot Central Reserve Police Force (CRPF) personnel in Jharkhand and Chattisgarh. The police pushed them away, I could hear swears being hurled at me while I drove away.

I have grown up in Delhi and have witnessed all sorts of political and social processions for causes and celebrations. Never have I come across any rally by the Congress, Bharatiya Janata Party or the Aaam Admi Party blocking traffic and disrupting the daily lives of citizens. They always make it a point to allow commuter traffic. It is customary for few participants in any rally or religious procession to take the charge of handling traffic until the procession reaches the designated area of protest or celebration. Working in rural Bengal for the past two years, I have witnessed the same sense of responsibility among participants of processions of Durga Puja and Muharram.

In my under-graduation days, I had seen the rallies by Akhil Bharatiya Vidyarthi Parishad (ABVP) and National Students' Union of India (NSUI) at Delhi University, where they clashed with each other causing serious damage to each other’s property. But never had I seen a mob cherishing sadistic pleasure out of disrupting everyday lives of fellow citizens like what the JNU mob did. Their protest seemed like a statement of entitlement caused by a sense of superiority. The blatant apathy towards citizens of the state displayed by the students shows all that is wrong with our university and idea of who a student is.

We live in a country, where thousands of farmers march to protest while ensuring that civil life is least disrupted, while highly educated research scholars feel entitled enough to cause social hazard. The student tag has become a licence for mob activities. Even the police are too cautious in dealing with a mob of students as the tag of a student is sacrosanct. Those who have travelled in a train from Buxar to Banaras would know how local students and aspirants for government jobs capture reserved seats from passengers.

The law should not discriminate while dealing with people based on their occupation if civility is to be retained. We are not living in some archaic period, where those engaged with generating knowledge can come out on the road and lynch people at will. Adults must be treated as adults, be it a student or a businessman. The student life should not become an option for sociopaths to engage in disruptive activities. A university is to make productive human beings out of the youth, not a safe haven for a lynching mob.