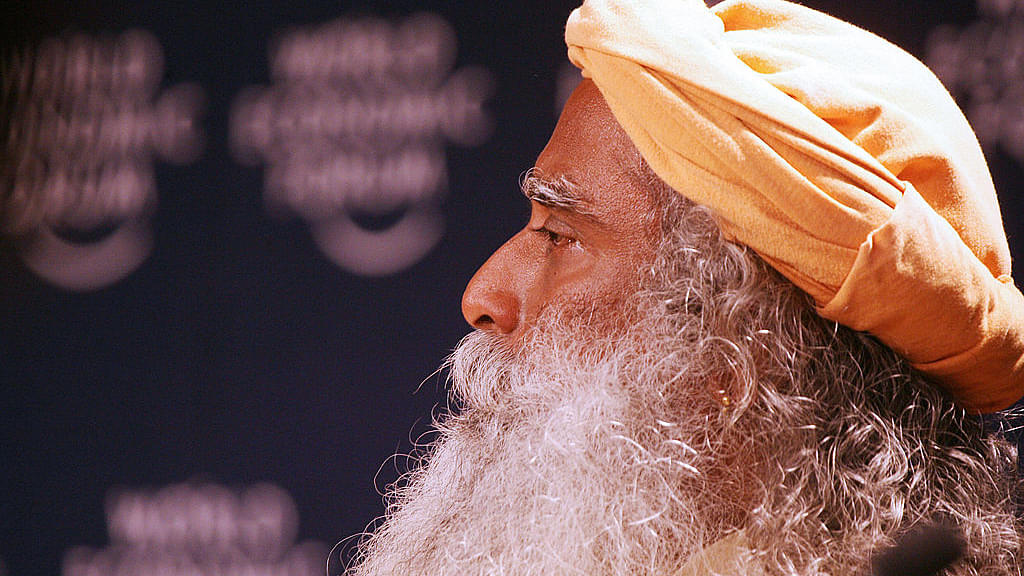 Sadhguru Jaggi Vasudev, founder of Isha Foundation in India listens during an interactive session on the last day of the World Economic Forum 28 January 2007 in Davos. (JOEL SAGET/AFP/Getty Images)

An extraordinary diatribe against Sadhguru Jaggi Vasudev by the doyen of liberals in India, Pratap Bhanu Mehta, stuck out like a sore thumb last week. Titled ‘Skimming the shallows’, the article was purportedly written to counter another article by the spiritual guru, titled ‘Beyond good and evil’.

What exactly got the goat of Mehta? Sadhguru argued in his article that India did not care so much about the repetitive straitjacket of morality, as it did for elevating one’s consciousness. Mehta finds the whole idea ‘insidious’. Short of calling it puerile, he goes on to scoff at Sadhguru, throws Nietzsche and Freud at him. Picks up a strand from Aurobindo, another from Iqbal, and then flings Manu at him. Mehta goes on to extol rule based morality and derides pursuit of consciousness as a means to happiness. He exalts morality to the status of an arbiter in all human affairs without distinctions of geography by stating that ‘In terms of motivation, morality, if genuine, always has an element of spontaneity to it; it is based on intrinsic motivation, rather than external fear or habit which is a simulacrum of morality. In practical terms, morality is the terms of engagement with which individuals relate to each other. A health system of morality will regulate our affairs on terms where our status as free and equal individuals is recognised’

Mehta goes on to point out that quest of consciousness leads to gradations among human beings and runs against the principle of equality. He then contradicts himself by citing Kant’s eulogy to rule based morality. He finally ends up with a derisive swipe at the entire sweep of Indian intellectual tradition, questions it again on the plane of its alleged failure to bring in social equity, finds Upanashids to be more individualistic, and ends by mocking Sadhguru by insinuating that India’s spirituality is served only to the privileged, and he should talk back to the powers (Read Modi) to justify his calling as a guru.

Besides being full of hubris and low insinuations against the whole gamut of Indian thought, Mehta condescendingly mentions Upanishads as more individualistic in thought than the consciousness theories being put out by India’s intellectual tradition.

To say that I am appalled at such lack of depth of an understanding of India’s intellectual traditions (not tradition, because India has an amazing plurality of them), would be stating it lightly. By venturing into an area where he seems to have little expertise on present evidence, he has exposed himself as a hateful propagandist rather than the much admired liberal of yore. The liberal cannot even distinguish between fields of logic and experience. Lest I be accused of whataboutery, let me dissect his narrative as put out in his take down of Sadhguru.

First some reflection on the western constructs of consciousness. It is well understood by students of comparative philosophies that the western notion of consciousness is in a dialectical relationship with reason, as in free will versus necessity. Tolstoy’s Epilogue of ‘War and Peace’ discusses these contradictions in a tortured sort of way. Nietzsche’s discussions on morality suffer from the same limitations, as western thought rarely wandered too far from Greek materialistic constructs. As with Tolstoy, Nietzsche’s forays into realms of consciousness are logic-driven, unlike the Indian discoveries that are experience driven. When logic drives examination of consciousness beyond a point, one goes mad as Nietzsche and Tolstoy did. An Indian guru, on the other hand, with his experience based discoveries of consciousness achieves liberation, as a Buddha did or a Vivekananda did.

Mehta’s sleight of hand is all too obvious when he first exalts Nietzsche’s version of challenge to morality to belittle Jaggi Vasudev’s allegedly watered down challenge. And then extols rule based morality of Kant. He plumbs the depths of being unreasonable when he compares these essentially limited western constructs to the Indian, and then blames Indian traditions for not having percolated the transformed consciousness to the society at large.

We will never know whether it was an insidious attempt on Mehta’s part or his ignorance that warranted such a limited comparison. Since he alluded to the Upanishadic thought, without referring to any Upanishad, let us examine his challenges to the Indian thought and the society with reference to the foremost commentary on the Upanishads, the Bhagwadgita.

The summum bonnum of the Gita is upholding of Dharma. Dharma does not have one absolute meaning, unlike the morality of Mehta (that is supposed to make men free and equal in all respects). It is context driven. Svadharma, Raj Dharma, and Rashtra Dharma are all codes having a context. Relative morality, in the lexicon of Mehta, except that he is unable to recognise it. With the dissolution of the mechanistic model of Newton’s understanding of physics, and discovery of quantum phenomena, science has come to recognise relativity, dynamism and interconnect of physical events. But in the static world of Mehta’s dialectics, it doesn’t really matter. He omits such profound philosophies as Samkhya, Yoga, Nyaya and Vaisheshik. The absolute morality principle he seems to advocate does find an echo in both Nyaya and Vaisheshik streams of Indian tradition.

Patanjali’s Yoga stream best exemplifies the state of evolution Mehta is in. Yama and Niyama are the basic living codes, but the consciousness is touched only after one has aligned body and Prana to its exacting requirements. As manas, buddhi, ahankar and chitta are progressively transcended, one achieves the unity with the Supreme. Role of morality is supplemental in Indian traditions, not dialectical. It is extremely difficult for someone bred in western dialectics to understand this. Mehta is no exception.

Coming to Mehta’s snide remarks on pursuit of consciousness having created gradations, and having failed to address the social questions, they are of a very low understanding of social evolution. First, it presupposes that western society was always egalitarian. That is the last thing they were. Feudal societies of the west were even more segmented than Hindu India. Moreover, both West and the Middle East embraced exclusivist religions that mandated killing and enslaving non-believers. This itself created a layered society that sanctioned the degrading practice of slavery. Faced with this terrible onslaught of marauding killers, any society would retreat into a shell. From the eighth century to the twentieth century, 1200 years of foreign rule was endured by Indian civilisation, yet it had the inherent strength to survive.  It survived not because of any codified morality but because men of highest consciousness were able to provide guidance in Dharma in its different contexts.

As for Manu, I challenge Mehta to produce one strand of upanishadic thought, or from any of the five other orthodox, and three heterodox systems of India that provide an underpinning to birth-based caste system. Manusmriti was just that, a smriti, i.e. A code with a context.  A code that was made specifically amendable. It had many versions too. The present text was discovered by Sir Wilson Jones in his quest to find something that would be more like the Holy Books of Islam and Christianity. Something that would provide boundaries to the limitless ocean of Indic thought. Manusmriti does not even merit the label of a Shāstra in the Hindu Āgam. From what one reads in his article, one is not sure whether he has even read Wilson Jones’s Manusmriti. More likely, he has just copy pasted leftist constructs. He might as well have quoted Ambedkar’s flawed understanding of Purusha Sukta. That would at least have had some authenticity of authority behind it, and resulted in some authentic debate.

Mehta’s morality is like the Abrahamic morality imposed by an imaginary Creator that divides the world according to loyalty. Contrarily, his morality has its rules that would make devil coexist with human beings, as Kant postulated. Indian philosophy had no use for devil to coexist. It would either sublimate the devil and humanise him or destroy him. Indian philosophy saw the divine in every bit of nature, unlike the irrational creationism that bestows soul only on humans.

India’s epics and stories make wonderful dharmic enunciations. Rama is the finest practitioner of all three hues of Dharma. He is the upholder of the code of Dharma. He is Maryada Purushottam. I suppose Mehta may find some similarity between maryada and his moral compass. Rama’s character is the one to follow for every ordinary mortal.

Follow Rama’s character, but don’t make the mistake of following Krishna’s character. Follow his teachings instead. Can a man of Mehta’s flawed understanding follow the profound logic? Krishna is Yogeshvar. His actions come from a much higher consciousness. Ordinary human beings are not at that level of consciousness, so let them follow Rama, and listen to teachings of Krishna. Both complement each other, and provide a template for an ordinary person as well as a yogi to transition from one state to another. As David Frawley states: “India is the only country and civilisation rooted in the Eternal, recognising universal consciousness as basis of all matter, life and mind”.

Difficult for you, Mr Mehta?

Quite understandably because you are not at the same level of consciousness as Sadhguru Jaggi Vasudev. So move through pratyahara, dharna, and dhyan before you challenge someone in the samadhic state.